Game of the Year #2 – Alien: Isolation 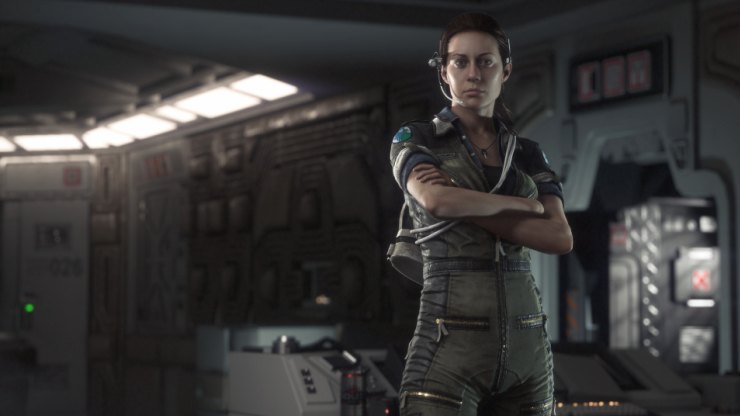 Licensed games can be tricky. Ask anyone who tried to make a decent Batman game before Rocksteady, and they’ll tell you the same. Alien, like Batman, is a franchise that has always struggled to translate well to video games despite the obvious its content. Who didn’t watch Aliens and think, “Damn, this would make a great shooter!”?

But the problem is that developers have always come at the Alien franchise from the wrong angle. Always. Despite the action-movie leanings of Aliens, it’s still a suspenseful horror film at its very heart, and so throwing guns and explosions at it only delivers on half the promise of the subject matter. While you’re strafing to avoid acid spit and mashing X to get a Xenomorph off you (seriously, who in the movies has ever survived that close an encounter with HR Giger’s hellish monstrosity?), you’re missing the threat. And the threat, girls and boys, is not a Xenomorph charging at you with its teeth bared, the threat is the damn thing silently uncurling from the heating duct behind you to drag you up into the darkness; the threat is opening that door and finding yourself face to face with drooling, hissing oblivion. As a result of what is, frankly, a lack of real understanding and respect for the beast itself (rather than just the legacy of the franchise), games like Gearbox’s Colonial Marines hit the shelves dripping with the guts of the universe, but none of the brains. They cram in the motion tracker noise, borrowed lines, cut-and-pasted environments and that exceptional “shit-hitting-the-fan” score, but none of the soul – and as any fan of anything ever will tell you, without the soul, you’ve just got a pretty box full of noise.

After Gearbox’s turgid mess spent eight hours urinating all over the reason I love movies, I didn’t think anyone would ever produce a workable game based on the Alien franchise. How could they? All people would ever do was throw M41-A pulse rifles and motion trackers at it because the noises are iconic. And that’s what was killing it. I even said as much in an opinion piece I wrote at the time. And so when Creative Assembly announced that they were working with SEGA on yet another Alien game, I was unimpressed. SEGA did nothing great with Gearbox – so what could they do with CA?

Well, as it turns out, Creative Assembly must have acquired a philosopher’s stone from somewhere, because what they created with Alien: Isolation is pure gold. A reverent level of respect for the franchise, not just aurally or visually, but in terms of character, of scripting, of the universe as a whole, means that Alien: Isolation brings the very best elements of Ridley Scott’s original vision to the video game medium, and it does so with utter and undeniable panache. So confident were Creative Assembly that they left it a good two hours before you even see the titular beast for the first time, but so well-crafted is their atmosphere that you’ll feel its presence from the very second you set foot aboard the Sevastopol station. As Amanda Ripley (daughter of timeless heroine Ellen in a plot development that somehow feels natural and organic rather than contrived), you’re afraid as soon as you find yourself alone in the dark for the first time. Indeed, when you meet your first NPC ally, all you’re doing is waiting for him to get nobbled so that the beast finally reveals itself – and what a reveal it is.

From then, you’re running and hiding – at least, for a good portion of the game. As you face off against terrified civilians, private contractors and malfunctioning Synthetics, you never lose sight of the fact that the Alien could return at any moment and end you. The checkpoint system is a bone of contention for many, but it speaks to a time when games made you regret hasty actions, evoked memories of the first great horror games like Resident Evil and Silent Hill, that added the terror of having to lose a huge chunk of hard work to the more general fear of being chased by inhuman monsters. In Alien: Isolation, screwing up will led to a reload 9.9 times out of 10, and it’s a mechanic that forces you to think, to use everything at Ripley’s disposal to survive – and she’s got lots of tricks, too, including noisemakers and flares to create life-saving distractions.

There’s an argument that the acquisition of the flamethrower and shotgun make the alien seem less frightening, especially considering the effectiveness of both weapons against the Xenomorph in James Cameron’s sequel, but it never quite makes the fear go away. After a dozen hours or so, you’ll begin to notice diminishing returns on the fear factor, just as you did in Dead Space, and arguably Alien: Isolation outstays its welcome by an hour or so, but that’s all down to the personal preference of the individual. In every sense of the word, Alien: Isolation is a blockbuster, a powerhouse of tension and suspense, eschewing overly graphic body horror in favour of slow-burning terror, a creeping menace that never leaves you. An excellent story and some great voice acting add layers, but the visual and audio design are truly the stuff of legend. I’ve not played another game this year that comes close to this level of immersion. It’s not just cherry-picked sound bites and visual nods we’re talking here; it’s that Creative Assembly have painstakingly recreated a retro-future world that is so close to the original that it’s genuinely uncanny. You wouldn’t get the same awesome sense of place if you visited the set of the movie itself.

In a year of frightening hype, hugely expensive developments and big-hitting AAAs, no one expected one of the very best releases to be a licensed game – especially not one attached to the Alien franchise- bur Creative Assembly promised nothing they couldn’t deliver. Alien: Isolation is an exceptional piece of game design and the best game to bear the Alien name ever made, bar none. Terrifying, tense and engrossing, it absolutely deserves the number two spot on our list this year.

Senior Content Editor Mick has been playing games for over 30 years and writing about them for around 12. After drifting from site to site for a while, settling briefly at the now-defunct Made2Game and freelancing for the gone-but-not-forgotten NintendoGamer Magazine, he came at last to rest at Godisageek. Mick has been a reviewer, staff writer and content editor here for some time, while also moonlighting a little for Red Bull Games. He has 4 kids, has written 2 novels, and sometimes even manages to pay a bill or two. You'll usually find him defending the galaxy in Destiny 2, battling evil in Diablo 3, or lurking in the background on Twitter. Find him there @Jedi_Beats_Tank, or on XBL (JediWaster247), PSN (Jedi_Waster) or Nintendo (JediWaster).
MORE LIKE THIS
Alien: Isolationcreative assemblySega