Jim Sterling Interview: From Critic to Thespian in The Charnel House Trilogy 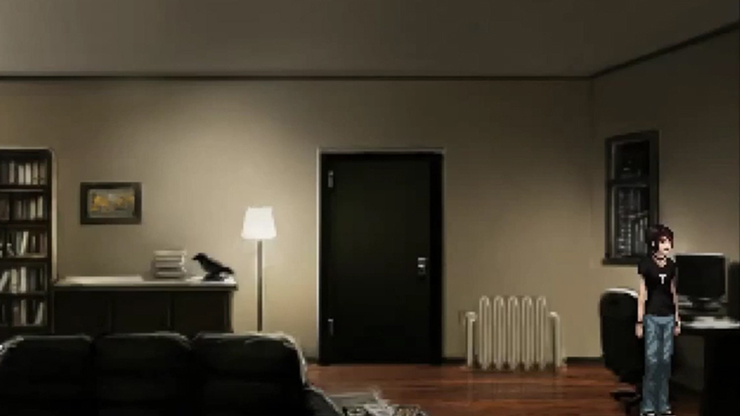 Working in the games industry, one can hope to reach a certain level of notoriety. Maybe your YouTube video where you talk to yourself gets a couple of likes, or maybe your review on the latest Souls game gets a decent number of views, or maybe you get so large that you break out of the traditional games media mould and do things without the backing of an editiorial team, or staff of writers.

Jim Sterling is a divisive figure. Some people adore the man’s work and some people loath it. Whether taking a game to task in his sometimes scathing reviews, or taking a stand in his Jimquisition video series, Sterling has amassed a great audience — one which stays loyal to him and follows him wherever he goes. Relatively recently, fans of Jim Sterling watched as the outspoken critic ventured into voice acting. Owl Cave’s upcoming title, The Charnel House Trilogy, sees the Englishman take on a role that tests his acting chops, but Jim told me that performing was something that he’s always been interested in, before he ever wore a pair of leather gloves or owned a fetching red tie.

“Before I started doing video game coverage, I had pretentions of going into comedy. I was part of a very little known sketch group. I had a go at stand-up comedy for a while…I say a while, it was literally two shows. It went over very well, but after a while, I realised I didn’t have the zeal you need for that kind of thing. If you go into comedy, you need to have a real passion for it and I didn’t have it. I found that passion came through more in writing and eventually covering video games. I didn’t have to force myself to write about games because the passion for it came so naturally. I did always miss the performance aspect of things and that’s sort of come through in things like The Jimquisition and now that I’ve gone into YouTube as the primary venue for game coverage, I get to engage with an audience more directly and talk to people rather than just write. I love to write but, I like to talk a lot, because I like the sound of my own voice more than anything else. So getting into voice acting is something I had an interest in just from the holdover experience I had performing on a stage.

Jim is a terribly funny man, even when not really trying. It’s pretty easy to see why developers might want to cast him in their efforts. Prior to Sterling’s first foray into interactive theatre, he told me he had little cameos in games like Retro City Rampage, where you could have plastic surgery to look exactly like the man himself. “I was one of the more popular faces for a while on their leaderboards.”

But, 2014’s Jazzpunk was where this chapter of Sterling’s career all kicked off. This was when the world got to hear him in their games, rather than discussing them on an episode of The Jimquisition.

“The guy who made [Jazzpunk] was something of a fan of mine and got in contact with me and asked me if I’d like to do stuff. I was going to be the director [character in Jazzpunk], but we kind of fell out of contact for a bit and then he’d already cast that. Eventually, [he] got back to me and tried me out for two different characters and I ended up playing both of them in the game.”

There was a bit of backlash, though. Like when Jessica Chobot turned up in Mass Effect 3 while working for gaming outlets, some asked if this was ethical. There were members of the video game playing public that didn’t think it was right that a critic would partake in the medium in which he is critiquing. So, how does Jim walk that fine line?

“It’s definitely tricky. I know there was quite a bit of backlash when [it was announced I would] be in Volume — Mike Bithell’s upcoming game. And really my answer to that is, for me, disclosure is the most important thing. I’m beholden, not to games developers, not to games publishers — I’m beholden to my audience. So, if I am voice acting in a game, obviously it’s an announced thing, I mean how can you hide you’re in a game? I do have a distinct voice. It’s particularly difficult to hide. So, I always make a big deal out of it. If I mention the game on a Jimquisition, [or] mention the developer, I always at least do my best to remember to disclose. There should be no illusion as to which games I’m working on and which games I’m not.”

Sterling doesn’t seek voice work. Every gig he has done has been because he was approached for a role. Well, except that time he got drunk and shouted at Mike Bithell on Twitter to put him in his game, Volume, for the laugh and because he thought it was funny, he tells me. “Of course, the other big thing is if I’m in a game, I’m not going to review that game because that wouldn’t be on. Whether or not I would review future games from that same developer hasn’t come up yet. It’s one of those bridges we’ll cross when we get there. I’m erring on the side of allowing myself to review it, but with very clear disclaimers, very clear disclosures. But ultimately that’s something I might just ask my audience ahead of time. To their great credit, most of my audience generally have no problem with any of this. So long as they know what’s going on, they’re perfectly fine with it.”

Jim’s latest efforts are in The Charnel House Trilogy, an adventure game from Owl Cave. Sepulchre (released on it’s own before), Inhale and Exhale make up the trifecta, which comes to Steam very soon. Rob Crowe, Sterling’s character, is described by Jim as “fun” and “creepy”.It’s clearly a character that Jim was chomping at the bit to play as he told me, “It’s the kind of role that I’ve been hoping to score.”

In Jazzpunk, there were clear references to some of the bits Jim would do on podcasts and on videos, but The Charnel House Trilogy is much more grim.

“It’s not a pleasent game in terms of premise [and] in terms of subject matter. A lot of the dialgoue I have made my skin crawl and I consider myself particularly hardened to these things. It’s different. I know looking at the original trailer, some comments were stating that it was a waste of my unique voice to have me play a character who seems to be that normal. I believe someone said it was wrong “to cast Jim Sterling as a normal human being”.

As Jim began to chuckle at this particular nugget from the YouTube comment section, he recommended that people should see how the character progresses over the whole story.”I think there will come a certain point where it will make sense as to why I’m playing that character.”

While Sterling eluded to the fact that he couldn’t give much away, understandably, I got the impression that there’s a strong sense of evolution with Rob Crowe and as a performer, that’s what you want, surely? “Yeah. With Jazzpunk, I played two characters, but they were very one-note characters. One was this cheese-obsessed, billonaire eccentric where I just had to sort of squash all of my neck fat up around my mouth and warble as best I could. The other one was basically Rita Repulsa from Power Rangers so I just had to yell with a scratchy voice and keep it at that same tone. I originally got the script for Inhale, the first bit, and kind of went to Ashton [co-founder of Owl Cave] and was like, “are you sure I’m the right guy for this because this character is very normal?” He’s just got a very casual sort of way of speaking, he’s very friendly — just a guy next door. And then, I was informed to wait until I get the next script in and it’ll all make sense.

With this being somewhat of a departure in the very early stages of Jim Sterling’s voice acting career, I wondered if there was a sense of trepidation. Was there more pressure with The Charnel House Trilogy than Jazzpunk?

“I think it’s the same amount of pressure for all of it. I have a bad habit of putting undue pressure on myself anyway, especially when it’s something relatively uncharted [for me], like voice acting. I just want to make sure it works. This was the same for Jazzpunk, as it is for Volume, as it is for Charnel House. I want to do a good job and I hope people like what I do. I’m very used to either riling up the masses with an angry Jimquisition video, or making people laugh with a light-hearted video. I’m quite comfortable with comedy, I’m quite comfortable with the consumer issues type stuff, but a game like this where it is more serious, where it is supposed to be dark, and is supposed to evoke a different set of feelings in your audience…I just really cross my fingers and hope it works. The studio, Owl Cave, said that I nailed it [and] really love what I’ve done, which has made me feel pretty confident, but ultimately it will be up to the people playing it as to whether or not I actually did. I just hope I did.”

But you’re here for the good stuff, right? You want the scandal, you want the dirt, you want the nitty-gritty, you want to know whether Jim Sterling keeps his ketchup in the fridge or the cupboard…

The Charnel House Trilogy is out on Steam, later this month.

Oh...and it's pronounced, "Cull-um".
MORE LIKE THIS
The Charnel House Trilogy