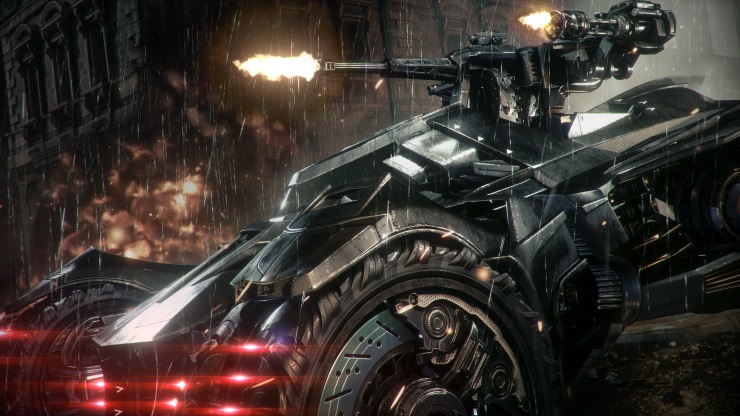 After recently spending some time playing Batman: Arkham Knight, the revelation was that the Batmobile, rather than being a concern, could well be the true star of the game. Here’s why…

1. It’s not a killing machine

Batman’s creed has always been never to kill anyone (just look at that ridiculous bike scene in The Dark Knight) and in Arkham Knight he is no different. Yes the Batmobile has a Gatling gun and a cannon, but aim at a human enemy and you’ll just stun them – as it will if one of them tries to kick your wheels.

Like a tank though, it is unstoppable. You’ll carve your way through fences, lampposts and cars that lie abandoned at the side of a road. Only hitting a building head on will stop you in your tracks, and even then you’ll be on your way in seconds. It also has a neat strafing mode for use in fights, transforming at the touch of a button. 3. You can still glide

Gotham’s streets may have been widened, but they’ve also been made taller. Gliding will be just as a big a part of the game as it was in City, and the Batmobile can even aid that; you can eject out and gain instant altitude without losing momentum, perfect when an objective is higher up.

4. It’s there when you need it

Hit L1 and – provided you’re outside – your car will race its way to you, appearing within seconds, and collecting you in the process. Even when you’re in the air, trigger it and you’ll plummet straight into it. It’s a great touch and means you never have to go looking for it in a city three times as big as Arkham City. Aside from traversing such a big map quickly now there’s no fast travelling, the Batmobile has other uses. It’ll help out in fights if it’s nearby, scare off groups of enemies as it approaches and it has allowed Rocksteady to come up with new puzzles. Attaching a cable and revving your engine evenly can be used to power up things, while Riddler racetracks see you tearing around changing circuits.

Read our hands-on with Arkham Knight, our interview, and listen to our thoughts in video form..

You can find me on Twitter and PSN as MacShanks, and feel free to hit me up if you have any questions, queries or feedback!
MORE LIKE THIS
Batman: Arkham Knightwarner bros