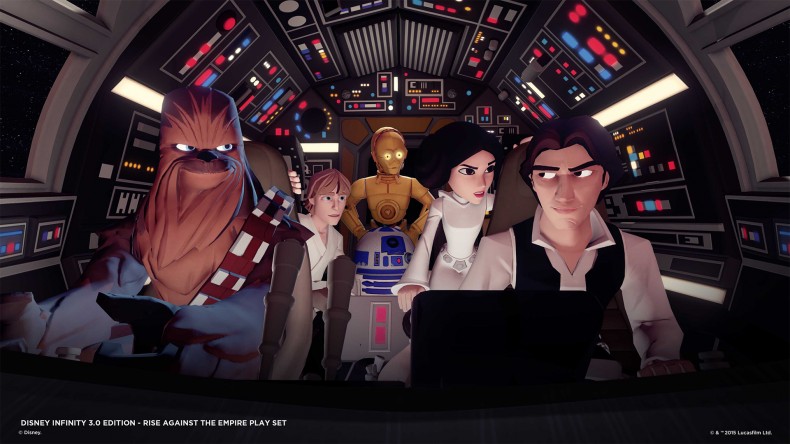 After already introducing characters from franchises like Pixar and Marvel, Disney will be expanding its Infinity brand of “toys-to-life” action figures with the release of Disney Infinity 3.0 this fall, accompanied by Star Wars and Inside/Out-themed play sets and characters.

Most significantly, following the release of 3.0, Disney will roll out three Star Wars expansions: Twilight of the Republic, Rise Against the Empire, and The Force Awakens. Each play set will introduce a new set of beloved Star Wars characters, along with new worlds to explore and master.

While the game appears to be more of the same, Senior Producer on Disney Infinity Sean Patton emphasizes what new features 3.0 will bring to the toys-to-life franchise. “With the Star Wars expansions specifically, what we really wanted to do was vary the gameplay. Players can go from playing the Battle of Hoth, which is a lot more mission-based, to the battle of Yavin IV, which is flight-based.” For instance, the battle of Yavin IV mission, in which the first Death Star is destroyed by Luke Skywalker, features a mixture of free-flight and on-rail sections.

Besides varying gameplay, one of the main design motivations for the Star Wars expansions is to recreate iconic cinematic moments from throughout the Star Wars saga. The Battle of Hoth stage provides an example of both philosophies in action.

“Taking down an AT-AT is no small feat,” explains Patton. “We actually borrowed ideas from Shadow of the Colossus and thought, wow, what if we make the whole act of taking it down a puzzle? So you can take it down as a character by blowing up the legs, climbing up a leg, taking out its batteries (because everything is a toy in our universe), or you can take a snow speeder, use your tow cable from the film, fly around it a few times, and take it down that way. In fact, if you’re really good, you can land on top of an AT-AT, open up the remote control, and use the AT-AT to take down all the others in the field.” As in previous installments, players can level their figures up by earning experience and unlocking unique skills. For instance, as they level up, Jedi and Sith characters like Luke Skywalker and Darth Vader can learn lightsaber abilities.

Outside of the main game, the customizable Toy Box mode now includes a hub area where players can experiment with gameplay elements. Disney flexes its franchise muscle by allowing players to mix and match characters from across the Marvel, Pixar, Disney, and Star Wars universes for the first time. This is especially good news because 3.0 offers a over-the-top brawler gametype, similar to Diablo, in the revamped Toy Box, allowing players to create dream teams of Disney icons. This gametype supports two-player split screen and up to four players online. Ever wanted to see Rocket Raccoon team up with Chewbacca? That is totally possible now.

Avalanche is still the core team behind the Disney Infinity games, but Disney has also brought on new studios with specific expertise. For instance, Avalanche worked with Ninja Theory, the developer behind Enslaved and the recent DmC, to completely reimagine the game’s combat systems, adding nuance to what was a rather simple series of button mashes.

Disney Infinity 3.0 will release this fall on the Xbox One, PlayStation 4, Wii U, PC, Xbox 360, PlayStation 3, iOS, and Android.