previous
MVP.March Announces Retirement as his Team Makes it to TI5 Proper
random
next
What to Watch on Day One of TI5
1 comment

The Pilgrimage Revisited: How Journey Takes Gaming Back To Its Roots 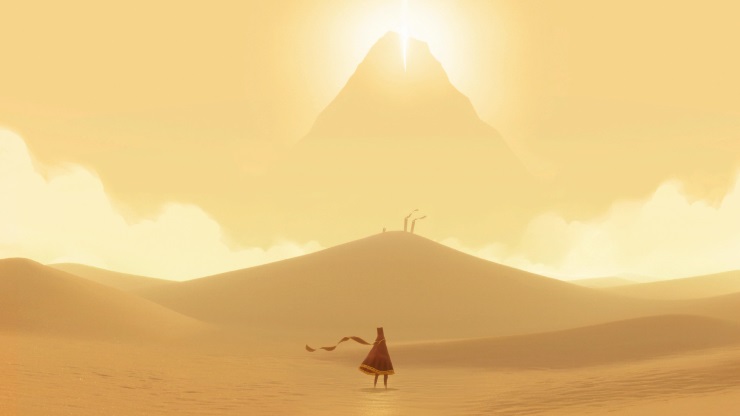 We’ve all played games that had a powerful emotional impact on us. Telltale’s The Walking Dead, for example: If you weren’t in pieces at the end of the first season then I’d perhaps consider invasive surgery to check whether you have a heart or not, but that’s a discussion for another time.

Over the past ten or so years, it has become much more important to developers to create titles laden with drama and emotion. Cutscenes, dialogue, plot: all of these are used to build a title that can keep a player engaged until the end. However, as hardware has become more powerful, developers have felt the need to amp up the dramatics to provide players with what they crave: a sense of awe. Playing games of yesteryear are great for nostalgic value, but we rarely find ourselves eating flies over the visuals and character connections. Cutscenes in 1995 were overwhelmingly awkward, littered with uninspiring and rather robotic dialogue. Fast forward twenty years, and cutscenes in today’s video games can give Hollywood films a run for their money. A compelling plot line is now considered an essential within most AAA games, with everything from characters’ personalities to their relationships to their perceptions and opinions being put forward through dialogue and intense cutscenes. Journey turns that formula entirely on its head.

Journey, before we get started on anything else, is truly an achievement to behold. It could be described as one of the most compelling arguments that video games are art. Its dreamy desert landscapes, minimalistic control scheme and lack of dialogue differentiate it from a lot of other titles out there at the moment. What’s strange is this: Journey omits a lot of things that make AAA games so emotionally binding at times, yet still succeeds in achieving a similar player reaction — one which could be argued to be an entirely unique and wholly more genuine response than to that of big-budget behemoths. The success of games like The Last of Us depends entirely on whether players would forge that instant emotional connection to characters. Fortunately for Naughty Dog, their stellar work had players tearing up within the first twenty minutes — but think about why. It begins with a relatable scene, believable and applause-worthy dialogue between the characters, realistically developed settings, before sticking the knife in with that scene.

Journey, while not exactly provoking such a strong reaction as dramatic titles, still emotionally binds its player to its silent(-ish) protagonist. In absence of dialogue, musical chimes are used to communicate. As other players join your world and accompany you on your journey, you feel personally invested in their companionship. Despite there being no actual conversation between you and the other players around you, you still feel able to distinguish what they’re trying to say by the pattern of chimes they input: a flurry of short notes to signal danger, and longer chimes to point out something important. This universal language is a testament to Journey’s ability to compel, acting as the single common denominator between players that ties us all together as we quest for the mountaintop. Dialogue does not exist, yet the sense of bonding makes us forget that. It is beyond fascinating to experience such parallelism with complete strangers, and continues to be an entirely soothing experience in second and third play-throughs. Had Journey featured some kind of dialogue, the connection between players would still probably have existed but not in the enchantingly primitive form that it currently does.

Another thing that Journey lacks is an unpredictable plot. It doesn’t branch out, or pull any fast ones with some crazy twist; it’s the same every time you play. But that’s alright. Knowing what you’re going to get is a tranquil and rather unexpected idea in today’s market, and despite the plot being an exact repeat of itself, that sense of wonderment lingers long after you’ve put the controller down. Its rather melancholic pace and simplistic concept runs totally diametric to a vast number of intricate and complex current games, yet it still succeeds. It keeps the storyline linear, the plot basic and lets the visuals carry the game along to its spectacular conclusion.

If you want it in one sentence: Journey strips away all the kitschy decoration, overwhelming thespian performances and complex control schemes and reminds gamers of the medium’s facile roots. It feels like a game that predates console gaming itself by reverting to such a basic structure. Its simplicity is what makes it so powerful, proving to players that games don’t have to be galvanised in grandeur to make a lasting impact – creating a classic that has aged well so far and will only become more meaningful as the years go by.

Currently an English, Journalism and Creative Writing student at the University of Strathclyde. Based in Glasgow, I spend most of my free time playing video games ranging from Japanese visual novels to horror games. You can contact me at greg@godsiageek.com!
MORE LIKE THIS
JourneyThatGameCompany

Sky: Children of Light is coming to PlayStation in December