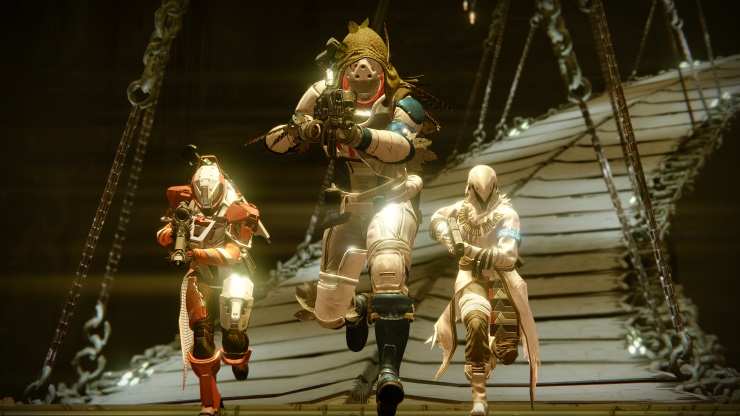 Not ones to let Destiny sit and stagnate, Bungie are bringing forward many changes for Destiny this month.

Chief among these is the return of the Hunter’s Quiver perk for their Shadowbolts. Beforehand an issue was allowing Hunters to fire as many shots as they wanted, now the perk functions correctly, only allowing three shots to be fired.

Other changes now, well, the gunsmith, Banshee-44, will allow you to purchase weapon parts for glimmer. Meaning that you wont have to desperately break down weapons to be able to get that gun upgrade you’re so looking forward to getting.

Fancy owning all three elemental damage sword without having to earn them across all three character slots? Well, in the November update you can. Once you’ve acquired the Exotic sword from the sword questline you’ll be able to buy all the Legendary sword types from Lord Shaxx.

Sherpas are a prime part of Destiny these days. Guiding lower level or less experienced people through areas alien to them is a charitable task. With the arrival of the November update you’ll be rewarded for your benevolence.

Iron Banner will return next week, but with some changes. Clash will now be a game type within the banner, which should spice things up a bit. As well as that Bungie are implementing the below additions:

Not only that, but the Gear Manager that has been in beta is now available to all. It is still in beta, but now everyone can try it and enjoy the benefits.

Phew, that’s quite a lot of stuff. Don’t forget that Xur is back today, he’s in the Tower Hangar. He doesn’t have a weapon. But he does have a gauntlet engram to grab as well as his class specific items.

A lover, not a fighter and an all round good guy (he would say that, he wrote this after all), he's happy to be here as part of GIAG.
MORE LIKE THIS
Activision-BlizzardBungieDestinyDestiny: The Taken King