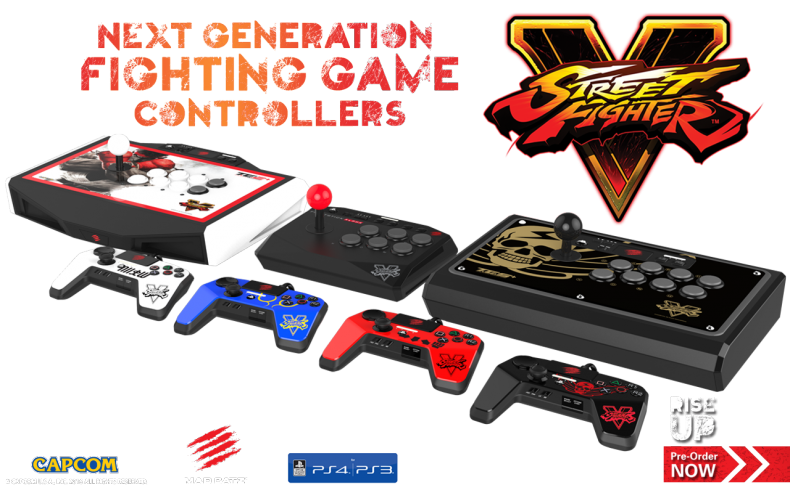 Mad Catz have today announced a range of official licensed Street Fighter V controllers, expected to be released alongside the game when it hits shelves next February.

Mad Catz, perhaps best known for their role in designed the guitar peripherals for the Rock Band series, have settled a licensing agreement with Street Fighter V publisher Capcom to release a line of specialised fighting peripherals including FightSticks, Tournament Edition FightSticks and FightPad controllers.

“With a focus on innovation and performance, the Street Fighter V controllers have been designed to appeal across the full spectrum of fighting gamers – from casual players to tournament-level competitive gamers,” read a statement by Mad Catz.

The controllers will be unveiled via a livestream on Capcom’s Twitch channel on December 5, live from the PlayStation Experience 2015 Event in San Francisco, CA. Pre-orders of the controllers will also be available at the event, with online pre-orders also currently available via Mad Catz official website. Grab them quick though, they appear to be selling out fast.

“Street Fighter V is one of the most anticipated games of 2016 and we’re excited to announce the details behind Mad Catz next generation of fighting game controllers,” said Darren Richardson, President and Chief Executive Officer of Mad Catz. “We’ve worked closely alongside Capcom to ensure we’re delivering innovative controllers that we believe will enable gamers of all skill levels to enjoy a superior gaming experience. Further, we expect these new products to assist us in growing our specialty controller sales throughout 2016 and beyond.”

See the list of specialised controllers below, along with their various traits. Street Fighter V releases in Europe and North America on February 16 and Japan on February 18, available on PlayStation 4 and Windows PC.

Currently an English, Journalism and Creative Writing student at the University of Strathclyde. Based in Glasgow, I spend most of my free time playing video games ranging from Japanese visual novels to horror games. You can contact me at greg@godsiageek.com!
MORE LIKE THIS
CapcomControllersMad CatzPeripherals