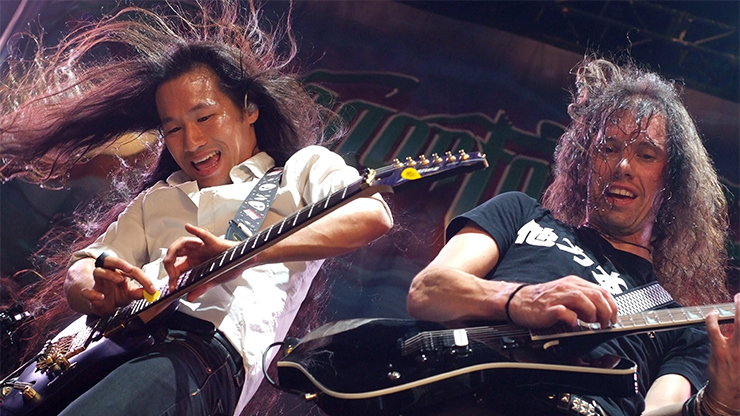 Guitar Hero and Dragonforce are synonymous with each other. Through the Fire and Flames first appeared in Guitar Hero III and, almost straight away, sales of the song doubled, and  over a few weeks, the track went from 2,000 digital downloads to 40,000. It was a mutually beneficial relationship — the song’s infamy led to a lot of one-ups-manship on YouTube and a Guiness World Record for Guitar Hero legend, Danny Johnson. It makes sense that we’re going to see the track appear in Guitar Hero Live when you really think about it. It makes even more sense that it’ll be appearing in something called the Shred-a-thon.

Guitar Hero Live’s Senior Designer, Nathan Coppard, explained the Shred-a-thon to me as a “special event [with] four of the toughest songs already in the game, [with] Dragonforce’s Through the Fire and Flames making it five.” It’s a, “fun community event,” he went on to say, explaining that this song captures everything great about Guitar Hero, in many ways.

I was wondering if the moment had passed, if Through the Fire and Flames should be put to bed as an option in GH and Coppard’s infectious enthusiasm really hit home that the demand from the players is there. “[It’s] the ultimate boss track,” he stated, almost leaping down the phone with excitement. “It’s a classic, top-tier difficulty song [and] the gameplay really holds up. [Through the Fire and Flames] has been re-approached from scratch for Guitar Hero TV. It’s a brand new interpretation [due to the six button peripheral] that offers a more satisfying challenge [than before].”

If you’ve listened to the Game of the Year podcast, you’re well aware of how hot I was on Guitar Hero Live — Freestyle’s ability to take a tired genre and breath new life into it has to be applauded. A lot of that comes down to their streaming service, Guitar Hero TV. When asked about the future of the series, Coppard was quick to tell me that, “GHTV is our platform for new stuff. [We’re] constantly adding new music,” before bringing up that Def Leppard chose to debut their latest music video, Dangerous, on Guitar Hero TV. Since its release, the service has been received very well and by the sounds of things, that will be the case for some time. “We’re always looking at old stuff to add, [while] listening out for more modern music to bring to GHTV.”

The Shred-a-thon, which begins today and runs until the 7th February, will sort the Joe Satrianis from the Joe Allens. The four tracks joining the Dragonforce ripper are Alter Bridge’s Cry of Achilles, Lamb of God’s Ghost Walking, Megadeth’s Hangar 18 and Trivium’s Strife. I informed Coppard of my inability to get past the first few bars of the plastic instrument classic on GH3 — something I hope to rectify this time ‘round.