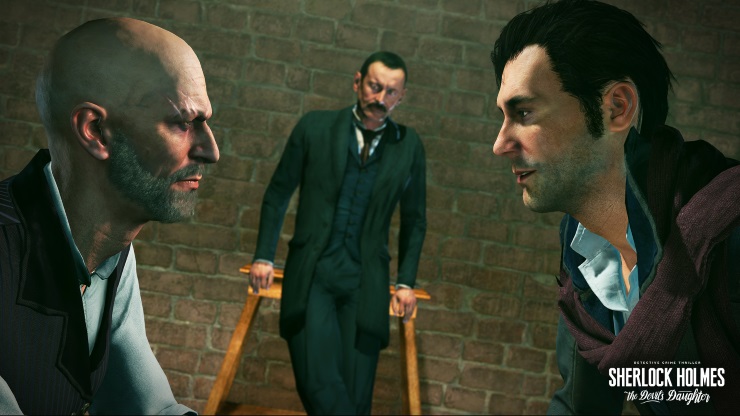 After having the opportunity to play Sherlock Holmes The Devil’s Daughters recently, I came away impressed. In this sitting I played through two hours of the first “case” to get a feel for the gameplay and was also given a demonstration of one of the later missions and some of the more interesting mechanics.

The first thing that struck me during the beginning was how great the voice actors were. I found the distinct and engaging voices of each character very immersive and combined with the meticulously designed study of Sherlock Holmes (the starting location) it really helps you feel “in the game”. The script is also something of note in the opening as it does a great job of introducing us to the key characters and how they interact with each other, for example Watson introduces Sherlock through a series of quips back and forth that establishes the bantering relationship they have. Obviously I can only speak for the English version of the game in this regard, other languages may have varying results based on their voice actors.

Despite the voice acting and script, something that lets these two down is the poorly animated characters. Their bodies don’t seem to quite be in sync with their speech and the mouths don’t seem to fully form the words they are saying. This may seem harsh as many games both past and present suffer from this, but it’s a shame to have the clever script and talented voice acting juxtaposed with clunky, less expressive animation. This ties into my first impression of the graphics, which was not great. The cutscenes looked pretty poor and everywhere other than Sherlock’s study looked like it had far less work put into making it look good. As I have only seen a small part, I cannot conclude that the entire game is like this so I hope there are more points in the story that look better. The first case starts with the interview of a young boy whose father is missing. It is before this interview that the player gets to experience Sherlock’s power of observation and deduction. Carefully identifying features that are clues to the boy’s story rewards the player with a character profile. If the player makes an incorrect deduction of the boy’s story they get an incomplete character profile that limits Sherlock in the rest of the case. In these observations it is down to the player to correctly deduce what each clue means. I like that using intelligence is rewarded while using plain guesswork is punished.

Games that reward smarter players are less common and a lot walk players through gathering and deducing clues. This game is different and for me that’s a good thing. This also applies to the multiple mini games that occur during each case. In the first case there is a shoe shine mini game which I managed to fail. This makes the next stage of the case a little more difficult which adds to the immersion.

From the demonstration given by one of the developers, it was obvious that the element of choice is key in the game. At the end of each case the player is given options on how to handle the evidence and which conclusion to go with. This decision impacts the rest of the story. We didn’t get to see how much this affects the plot, and so it may just be different routes to the same ending, but we will see come June 10th.