previous
Preview: The Legend of Zelda: Breath of the Wild is like The Witcher made by Studio Ghibli
random
next
Final Fantasy XV gets a new 'Wait' mode
0 comments

Preview: God of War could be Sony’s best exclusive 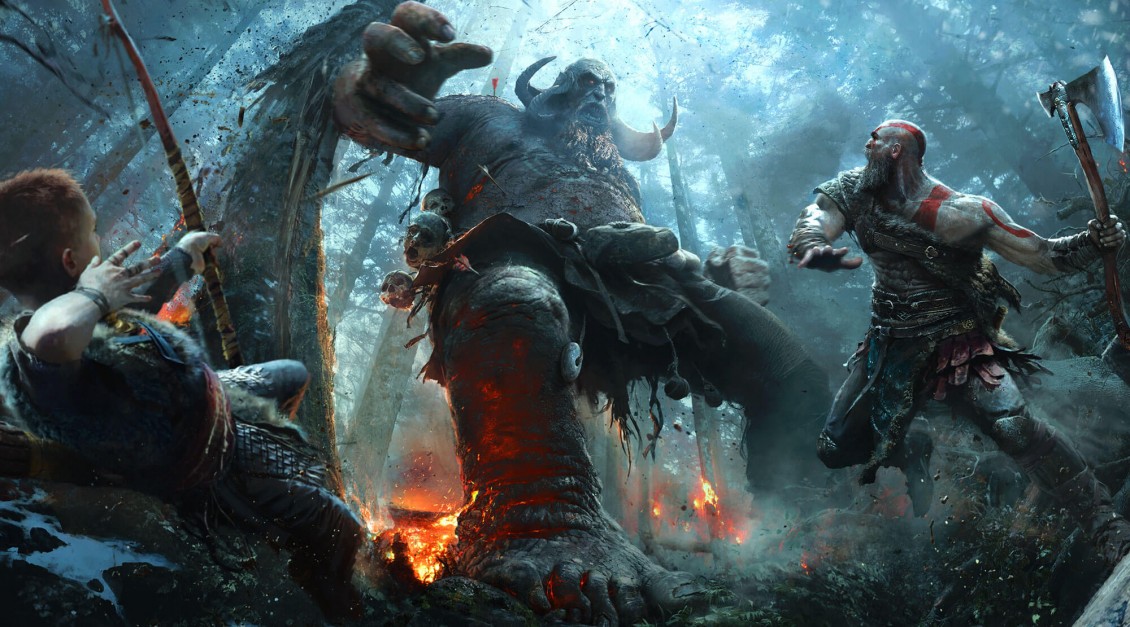 Last year I kicked off E3 with a demo of Dark Souls 3, which was pretty cool. But this year I think I went one better, with a demo of the new God of War, which looks incredible.

The behind closed doors presentation that I saw was a live play of the demo that kicked off the Sony conference. It started and ended in the same way and featured the sames fights, but this time we got to see a little more exploration and was talked through it by Rob Davis, Lead Level Designer who confirmed that this demo was running at 30FPS. If you haven’t watched the original debut at the Sony conference, you can find it below.

Anyway the first noticeable difference in the demo came when chasing after Kratos’ son when he is scouting the deer. Whereas at the conference he followed him directly here we did a little bit of exploring and got to see a glimpse of how big the levels are. Gone are the enclosed environments of previous titles and instead we saw a relatively large open area, with hidden secrets to discover. We went a little way off the beaten path and came across some crafting materials, which we wouldn’t have found if we just went along the clear path.

Apparently stuff like this will be dotted around all over each level. Davis mentioned that if you are in a snowy forest you expect to be able to get lost, and travel in multiple directions instead of being forced down a relatively narrow path that gives the illusion of space, and that is why they have widened many of the areas. In the Q&A afterwards he was asked if this was an open world game and was careful to say neither yes or no, mentioning instead that the idea is to make people feel like they are in a believable space, and unless they intentionally try to find the edge they shouldn’t be hitting any artificial barriers.

As we moved on, we hit the first combat area, and while not drastically different the combat played out in a new way. This time the player put a lot more focus on throwing his axe than in the Sony demo, and this was true throughout. Throwing can simply be done by holding down a trigger to focus and throwing the axe, and it can also be recalled at the press of a button at any time, even after you have just thrown it. However, should you throw the axe and then go straight into a kick ass combo, certain combo moves will recall the axe automatically, allowing for some incredibly cinematic moments when Kartos smashes a guy in the face just seconds after catching his axe mid air while doing a front flip. Later on during the big troll fight, we also saw some new melee moves from Kratos, with standard attacks being done with R1 and L1, and was told about the “son button”. When in a fight, your son, who it turns out is not quite as incompetent as he seems, will automatically fire arrows at enemies, but won’t become a liability. He also, for the purposes of this demo at least, has three special arrows, which I think have some sort of electrical power to them. Hitting the son button at a certain time will make him fire one of these arrows onto the target you are fighting, and this can be done mid combo for devastating effects. While not confirmed, it seems logical that as the son grows throughout the game his powers will too, meaning eventually he will become an invaluable tool against the Norse gods.

It would be almost impossible to do this preview without talking about the visuals, because this was easily the best looking game I saw all day. The environments look incredible, even if there were a few cracks that appeared, such as footprints in the snow just disappearing if you stood still for a while. The landscape looks so harsh and difficult to survive in, but at the same time beautiful and full of incredible vistas. If the final game ends up looking exactly like this, which they promised it would, then we are in for a real treat.

One interesting tidbit they pointed out was that they have intentionally kept the camera angle low and looking up. This allows for easier environmental storytelling and generally allows you to see more of your surroundings. After all there is only so much snow on the ground you can look at before it all becomes a blur. One example of minor environmental story telling was when a flock of birds flew up out of a bush, to signal danger. Then low and behold 10 seconds later the shit hits the fan and we are in a fight. Another minor detail that was easily missed but made a big impact was that during the entire demo, both here and at the conference, the camera didn’t cut once. Everything was one long camera shot, and transitions between gameplay and cutscenes are seamless, to the point where you can’t tell the moment you lose control if you aren’t playing.

With the new Norse setting, which the devs seem to be very excited about, a son to look after and the promise of a true father-son tale, God of War has taken a dramatically different turn. Gone is the crazy rugged maniac that Kratos once was, although hints of that still come through, and in his place is someone who is learning how to become a father.

If you had told me a week ago that the first thing I would see at E3 would be an emotional father and son demo featuring Kratos from God of War in a snowy Norse tundra, I would have laughed at you. But seeing really is believing and now I genuinely think this could be the best exclusive Sony currently have.

eSports! I joined God is a Geek all the way back in September 2013 and since then have spent most of my time on Dota 2, and occasionally posting the odd review, news article or totally wrong predictions for The International. When I am not playing Dota I can probably be seen watching some kind of strange eSport or begging for more Twitter followers (@MikeStubbsy if you are interested). Aside from GiaG I am a computing student, football coach and major Apple fanboy.
MORE LIKE THIS
e3 2016God of WarPS4Sony