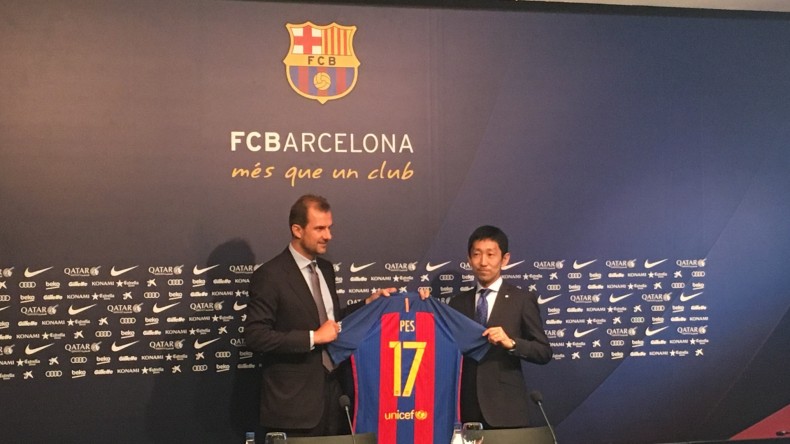 At a press conference in Barcelona, Konami and PES unveiled their cover stars for PES 2017, and it’s rather interesting.

President of Konami Europe; Tomotada Tashiro, and Chief Revenue Officer for Barcelona; Francesco Calvo took to the stage to announce the premium partnership, and we were there to get all the info.

The front cover for the standard edition will feature Messi, Suarez, Neymar, Pique, and Rakatic, while the special edition is the Barca kit front and centre, a steel book nonetheless. If you pre-order, you’ll get Barca MyClub agents.

There will be Barcelona stuff in mobile games, but there was also a new trailer which showed the Nou Camp, our man Dan Murphy said the players look stunning.

On that note, the Nou Camp will be exclusive to PES for three years, and the stadium will be perfectly recreated including chants. The duo claim that the Barca squad are lifelike – exact.

There will be PES legends that are exclusive, too: Ronaldo, Rivaldo, Xavi, Ronaldinho, Puyol, and Enrique, with more coming.

Here’s a few snaps from the conference, taken by Dan Murphy, including some of the goalscoring legend himself, Rivaldo.

Dan even managed to capture the announcement on video! Make sure you subscribe so we can bring you more PES content soon.

Here’s the packshots of both editions:

Editor-in-Chief here at GodisaGeek, I organise almost every bit of content as well as running our weekly Podcast, and being the lead producer on our YouTube Channel. That means I'm very busy and sometimes grumpy. Yay!
MORE LIKE THIS
FC BarcelonaKonamipespes 2017