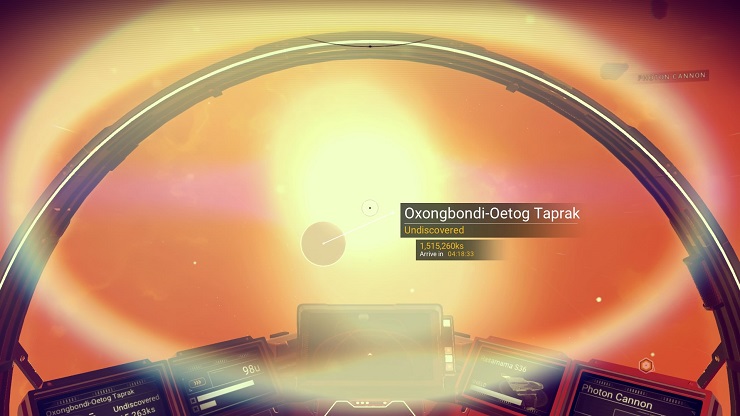 Everything mentioned below has happened in my playthrough so far, therefore it may contain spoilers.

It’s funny really, being able to travel to any star system or planet, but choosing to settle on just one. After everything I’ve seen so far, I missed my home, wherever the hell that was. I wanted to find peace – serenity in the chaos. I knew I had to find answers, but I needed to rest and recuperate. After leaving Luvumageer Eilun, I travelled to one of its moons and found one of the most beautiful planets in the galaxy.

The ground was covered in some of the most exotic plant life in the universe, blowing in the gentle breeze – moving in the most elegant of ways. The mountains in the background were covered with snow and the sky was as blue and as deep as the planet’s oceans. I never expected to see anything as stunning as Otoroitelevs, but I did. I walked for hours and it helped to clear my mind of all the stress and anxiety. I met elegant creatures and peaceful beasts; some were flying through the air like a feather in the wind, others were stomping majestically across the plains. It felt like I was back at home – back where things were simpler.

I met some of the locals, too. Officer Hezucheko was waiting around the trader’s bay, and I couldn’t fully understand what he was saying to me at first. I’d learnt a fair amount of the Korvax’s common tongue, but I was still a little rusty. He ended up giving me a brand new multi-tool and it cuts through minerals a hell of a lot easier than before. Everyone here seemed happy and I wanted a slice of that – I wanted to feel that peace. Sentinels flooded Otoroitelevs and I was targeted. They wouldn’t leave me alone. I’d met some of them before, but none had been this aggressive or full of purpose. I still don’t know what I’d done to piss them off, but I couldn’t take it anymore. They came in a whirlwind and they ruined my serenity. I was happy for the first time in a long time and they fucked it up. I left Otoroiteleus and will probably never go back. I miss it now, I really do. Those fucking sentinels are a poison on the galaxy and I’ll do everything in my power to make them pay.

I ended up drifting for a while, extracting elements from lifeless meteors and checking in at the local space stations to gather as many units as I could find. I wasn’t supposed to live a normal life, I was supposed to fulfil a purpose I still wasn’t sure what it was. I build around 3 warp cells to break into further systems. I managed to locate the Atlas interface a couple of star systems away and I knew I needed to get there, if only for answers – the same answers I haven’t managed to find yet. Yurgurdity 2 Itke was the last planet I arrived on before pushing forward towards the Atlas. I visited there to stock up on supplies and sell off some of the gold I’d harvested a few systems back. After building the fuel for my warp cell and filling up on thruster fuel, I got in my ship and prepared for warp speed.

This was the last step before finding some answers to the questions that’d been a burden to me for so long. The Atlas was so close and I was more than ready to get there. I flew out of the planet’s atmosphere and headed through that glorious tunnel of light towards the Atlas. From the moment I arrived, it sat there in the silence and calm of space with great purpose – a powerful force, dominating the stars like God himself. The red orb shone at its core and provided me with a way inside. I flicked the boosters on and flew towards it with both nervousness and excitement. Would this be the moment I found out what the hell was going on in this galaxy or not? As I entered the Atlas, my nerves multiplied and I realised something strange was going on. This was it.

No Man’s Sky patch 1.63 is available on all platforms adding a new exocraft, increasing inventory space, and a lot more
Support us on Patreon for exclusive content