RIVE looks to be an explosive finale for Two Tribes 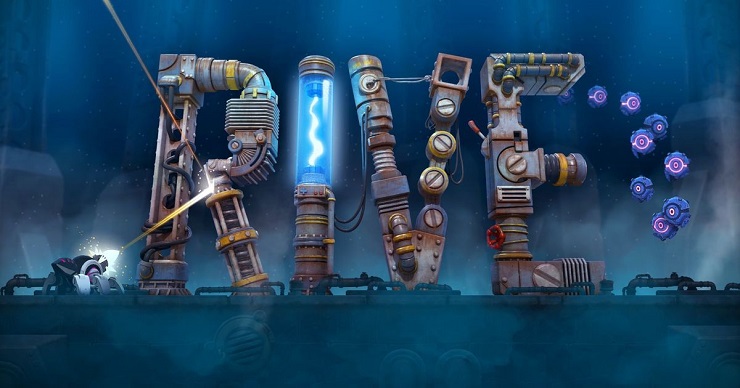 Hard games are all the rage at the moment. The ones that are unapologetically hard, and want to make you work to get a return on your investment. Two Tribes have been around for a while, and in RIVE they’ve decided to give you a damn hard time for their finale. From the start there’s only one difficulty setting – and that’s Hard, with further, more difficult levels to be unlocked. And it is hard, not just to play either.

RIVE is part platformer and part shoot-em-up. You’re a grizzled pilot guiding a walking tank around a giant ship in search of fuel. You’ll jump from platform to platform as enemies pour in from all angles. The action is a good sort of chaotic, with you running and jumping around explosions that really shake the screen in a Vlambeer kind of way, Two Tribes really are making sure they go out with a bang. It’s not all about platforming either as there are times where you’ll need to guide yourself around zero gravity levels; this is a platformer, but it’s a shooter first and foremost. Your tank can fire in a full 360 degrees, and has selectable secondary weapons in the form of mines, rockets and a shotgun. There’s also the ability to hack certain elements around the environments, allowing you to have additional weaponry or even a healbot to ensure you stay topped up during the chaos. This is a requirement for some bosses, such is the nature of the things they throw at you.

A lot of the time the game will blindside you by making you constantly focus on one direction before assaulting you from the other one, and it’s in these moments where you’ll unfortunately need to rely on trial and error, as the speed of some of the enemies can make it very hard to react to. It can feel a little cheap to die to that, but the game is so damn fun that you won’t really mind. So fun in fact that despite the frequent crashes I encountered during the game I kept wanting to go back and try again. And try again I did; until a segment with a fuel tank in a furnace (don’t ask) resulted in an impassable bug that completely impeded my progress and also gave me access to a little corridor underneath the world from which I couldn’t escape.

Two Tribes have a good month to sort these niggles out, and considering this is going to be their last ever game, I’m confident they’ll manage it. RIVE looks to be a fitting swansong for them, and it’s certainly something that should be on your radar.

A lover, not a fighter and an all round good guy (he would say that, he wrote this after all), he's happy to be here as part of GIAG.
MORE LIKE THIS
PCriveTwo Tribes