previous
The good and bad of Titanfall 2: gameplay, upgrades and earning your Titan
random
next
Call of Duty: Infinite Warfare Multiplayer to be revealed on Friday
0 comments 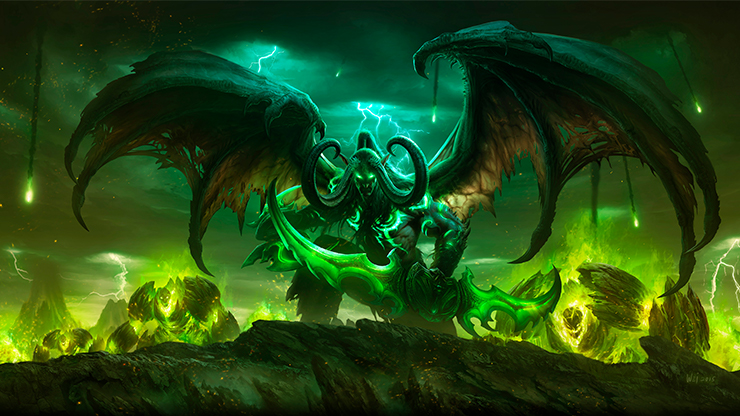 Master the Demon Hunter hero class, take up mighty Artifact weapons, and unlock the mysteries of the Broken Isles in the latest chapter of the Warcraft® saga

PARIS, France – August 30, 2016 – A storm of fel fire rains from the heavens, and demonic armies flood into Azeroth in terrifying numbers. The Burning Legion has returned, and the sixth expansion to Blizzard Entertainment’s acclaimed massively multiplayer role-playing game, World of Warcraft®: Legion™, is now live!

In Legion, Azeroth faces complete obliteration as the warlock Gul’dan brings forth a demonic army more powerful than any the Horde and the Alliance have ever faced. To stop the Legion’s destructive crusade, Azeroth’s defenders must embark on a quest to unlock the mythic secrets of the Broken Isles, seek out and master Artifact weapons of legendary might, and rally like-minded champions to their cause in their Order Halls. In this desperate hour, they must also strike a forbidden pact with the outcast Demon Hunters of the Illidari, fel-twisted disciples of the dreaded Illidan the Betrayer. Should the heroes of Azeroth fail . . . kingdoms will burn.

“We’re excited to return to one of Warcraft®’s core conflicts—the ongoing war against the Burning Legion—and send players on their most epic adventure yet,” said Mike Morhaime, CEO and cofounder of Blizzard Entertainment. “We’ve filled Legion with features and content that give players whole new ways to experience World of Warcraft, including a brand-new hero class, awesome Artifact weapons that unlock a new progression path, and more freedom to explore than ever before. We can’t wait for players to see everything in store in this expansion.”

World of Warcraft: Legion introduces a host of new features and content to aid heroes in their quest to save Azeroth:

New Hero Class: Demon Hunter—Unleash Havoc in the form of devastating and dexterous attacks, or seek Vengeance and use your demonic powers to protect allies from harm. Demon Hunters begin their quest at level 98†, so you can quickly join the battle on the Broken Isles.
New Feature: Artifact Weapons—Seek out and master legendary Artifacts, mighty class-specific weapons from Warcraft lore—such as Ashbringer and Doomhammer—that grow in power as you use them in battle against the Burning Legion.
New Continent: The Broken Isles—Explore new zones that dynamically scale to your level. Brave the vrykul realm of Stormheim, where mythic titan Keepers clash for control; unlock the secrets of the night elf ruins of Azsuna; free Val’sharah from the grip of the Emerald Nightmare—your path is yours to forge.
Boost to Level 100—Head straight to the front lines of the battle against the Legion with an included level-100 character boost. Try out different classes before you commit to boosting, with Legion’s new Class Trial feature.
New Feature: Order Halls—Gather with fellow members of your class and plan your resistance against the Legion. Command troops and champions of your order—including iconic Warcraft characters—to carry out missions to further your cause.
New PvP Honor System—Earn all-new PvP-specific powers as you advance through the new Honor system, and earn rewards that benefit you whether you’re in the Arena, on the Battlegrounds, or engaging in PvE content.
New Feature: World Quests—Experience a vast and ever-changing array of adventures for max-level characters. Hunt for rare treasures, spontaneously join forces to conquer elite bosses, and much more.

World of Warcraft: Legion is available in a Standard Edition (physical and digital versions available; SRP £34,99) as well as a Digital Deluxe Edition (SRP £49,99), which contains a hoard of in-game bonuses for a variety of Blizzard games: an Illidari Felstalker mount and pet for World of Warcraft, a Felstalker mount for Heroes of the Storm®, a helm transmog and wings for Diablo® III, and a pair of fel-infused StarCraft® II portraits.

World of Warcraft: Legion is also available in a retail-only Collector’s Edition which includes the digital bonuses from the Digital Deluxe Edition along with a full-color hardcover art book, a behind-the-scenes two-disc Blu-ray/DVD set, a CD soundtrack, and a Legion mouse pad. Supplies are limited, and players should check with their local retailer for availability. Visit http://collectors.wowlegion.com to learn more.

World of Warcraft: Legion is now live in the Americas, Europe, Australia, New Zealand, and Southeast Asia, and launches September 1 in China, Korea, and the regions of Taiwan, Hong Kong, and Macau. For more information on the expansion, visit www.wowlegion.com.

†Only one Demon Hunter per realm (per account); requires at least one level-70 character on realm.