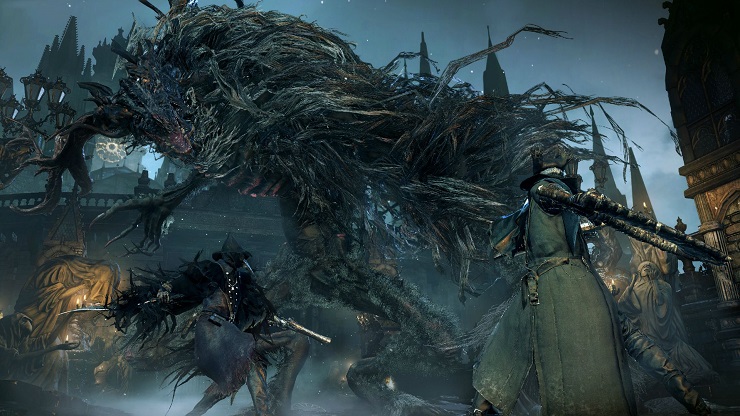 I wasn’t always a fan of Dark Souls. It took several attempts for me to ‘get’ the game, but after having an early hands-on of Dark Souls II and enjoying it, I decided that it was time to try the original game one more time. With a bit of luck, it dropped to £3.74 during an Xbox Live sale, giving me the perfect opportunity to jump back in. And I did, finishing it just weeks before the second game arrived. Unlike a certain unsavoury corner of the Dark Souls community, I loved Dark Souls II.

When Bloodborne was announced at E3 2014, I was definitely interested. Again, I got to play it early at a hands-on event, and although I struggled with the gameplay changes, it seemed like FromSoftware had another hit on its hands. When it finally arrived in March 2015 and I began playing properly, the magic just wasn’t there for me. I quickly grew tired of the opening area of Central Yarnham, and the sheer number of giant werewolf bosses felt like lazy design – obviously plenty of work went into the quality of their visuals and animation, etc., but there was a definite lack of variety and imagination in many of the earlier bosses. I just didn’t enjoy my time with it and I eventually gave up. It just didn’t grab me. So why am I giving it a second chance? Well, I don’t know really, maybe I’m just a glutton for punishment. But here I am, 18 months later, looking at the game with fresh eyes and lower expectations, to find out if I can finally see the game that others see.

Despite the boredom of Central Yarnham, I found myself beginning to enjoy the gameplay this time around. I started to get a handle on the dodge timing, even going so far as to learn how to parry properly using my gun, though that part didn’t always end well. Just when I thought I knew when to hit an enemy or stagger them, I’d get an axe in the face, or claws would turn me into a human sieve.

Death has always been par for the course in FromSoftware’s “Souls” games, but Bloodborne certainly takes it up a notch. It far outweighs the Dark Souls games in terms of deaths, thanks to its removal of a blocking ability and much more unpredictable enemy animations. Its atmosphere helps to keep things feeling dangerous and oppressive too, with some stunning sound design to accompany its disgustingly gorgeous visage. It actually feels more like a survival horror than a roguelike. This, I feel, is Bloodborne’s biggest strength. When you hear the sound of that creature type you fear, or a noise from something you haven’t yet seen, and you’re stuck in a cramped college building or a misty forest full of poisonous snakes, it taps into that side of your brain that tells you to run the fuck away.

Unfortunately, when you’ve been waylaid by yet another group of enemies designed specifically to vex you, with snipers and extremely aggressive mobs that can damage you even as you’re hitting them, that oppressive atmosphere is lessened considerably. No longer will you be dreading the area ahead, instead you’ll sigh as you remember what’s coming up, even going so far as to try sprinting through. This isn’t new to Bloodborne of course, but sprinting through Dark Souls areas was usually to save time, not because you were sick and tired of being overwhelmed for the umpteenth time.

Bloodborne is filled with these moments, with enemies that seem to circumvent the basic abilities of any character. It stems from the game’s fundamentals coming directly from Dark Souls, a game not designed for such fast-paced and relentless combat, and Bloodborne’s controls didn’t feel appropriately different enough or responsive to keep up with the game’s action. It often lags behind, “storing” button presses, leaving your character doing extra moves well after the fact, which often results in a death not wholly of your own making. The bosses are no better. Some are genuinely fun to fight because they’re in keeping with the pace of the game’s controls, but others just attack relentlessly to the point that you have no way of avoiding them. And when many of them are massive werewolves with lots of lank hair flopping around and disguising its animations, you really don’t stand a chance. It doesn’t feel like you’re striving to beat a worthy opponent half the time, it just feels like you’re banging your head against a wall until the wall eventually cracks. But all that does is leave you with a headache and probably some sort of lasting damage.

As with all of the Souls games, Bloodborne’s bosses all come with multiple phases too, but inevitably they end with a phase filled with flailing claws and confused animations. During my fights with the Blood-Starved Beast, twice I got it down to a sliver of health before it just wailed on me, a whirlwind of damp fur and razor sharp claws, completely ignoring my attempts to dodge as it tore me into teeny, tiny pieces. The same thing happened with Vicar Amelia and Father Gascoigne, both of whom devolved into a blur of claws and death in their final phase. It felt cheap.

And so, with an open mind and all the will in the world, Bloodborne still wasn’t fun for me. As much as I began to enjoy myself early on, that enjoyment fell away and was once again replaced with a sense of disappointment and boredom. However, I did see at least a hint of the quality hiding within, but not enough to keep me playing.

It did make this endeavour worthwhile though.