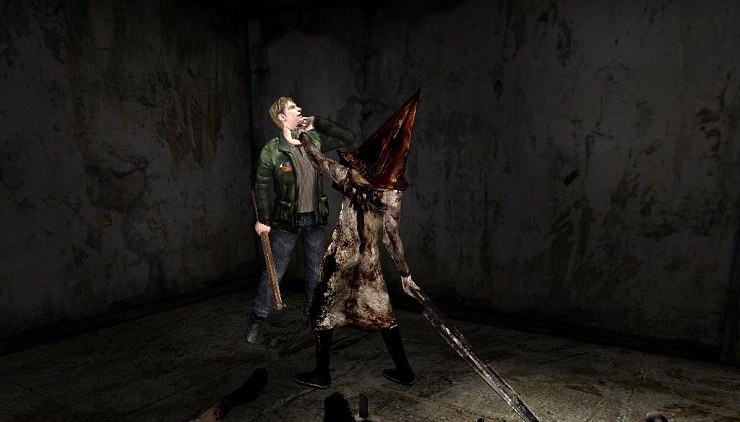 Back when the PlayStation 2 arrived, a trailer appeared at E3. It featured disturbing creatures, strange characters, an incredibly memorable piece of music, and graphics that seemed impossible for Sony’s then new console. When the title “Silent Hill 2” appeared on screen, that was the moment I knew I’d made the right decision to buy a PS2 on launch day.

When September 2001 rolled around, I picked up my copy (the same copy that still resides on a shelf in my home) and raced home to play. With the curtains drawn and the sound turned up, I was transported to that little public restroom beside Toluca Lake, listening to James Sunderland recount the tale of receiving a letter from his late wife, urging him to return to Silent Hill. Right from the start, as I followed the long, winding path that ran alongside the lake, there was that familiar sense of dread that I felt when I entered the dark alleyway at the beginning of the first Silent Hill. There was no darkness here, no industrial music banging away, just the crunching of James’s shoes on the dusty trail. And something else, another set of footsteps somewhere behind me, but nothing ever showed itself. It’s that kind of creeping dread that permeates the entirety of Silent Hill 2, as it eschews gore and jump scares in favour of a psychological horror that plays on more subtle fears. That’s not to say there aren’t one or two moments of immediate terror, but they really are rare.

The moment that sums up Silent Hill 2 for me, and shows off the game’s creepiness, is in the apartments early on. Wandering down a dark, narrow corridor, barely able to see anything, the series’ signature radio static slowly builds up as you move forward. As it reaches its loudest, bars block your progress, but you aren’t alone. On the other side of the bars stands a figure, a rusting metal pyramid for a head, doing nothing but watching you. You enter the door to your right, explore the room a little, but when you exit back into that corridor, Pyramid Head is gone. It’s a simple technique, but all I kept thinking after that was, “where is he?”

This set the tone for the rest of the game.

Although we’re used to this kind of thing in today’s games, with psychological horror and generally more disturbing and heavy topics being displayed in many games, Silent Hill 2 was one of the earlier AAA offerings to deal with things like child abuse and mental illness. There was a lot of symbolism throughout the game too, with everything from the supporting cast to the creatures, being specifically designed to represent something in James’s mind, torturing him during every moment of his visit to Silent Hill. For example, in Brookhaven Hospital, the nurse creatures’ disturbingly erotic sounds, and their seemingly unnecessary display of cleavage, represented the sexual frustration James felt while his wife was in hospital with a terminal disease. It’s not exactly a happy tale, this one. But one of the most tragic stories of Silent Hill 2 is that of Angela. Called to Silent Hill in order to find her missing mother, she seems awkward and mistrustful in the player’s first meeting with her. Throughout the game her behaviour grows more erratic with each meeting, and it is eventually learned that she was raped by her father throughout her childhood. It was only after murdering him with a kitchen knife, that she was able to escape and head for Silent Hill. The scene in which we learn of this is one of the most harrowing and disturbing scenes I’ve ever witnessed in a game, and nothing is explicitly said or shown, leaving it all up to the player to realise the horrible truth of Angela’s past.

This is why Silent Hill 2 is such a pivotal game in the survival horror genre. It doesn’t need to be gory, it doesn’t need to shock you with explicit imagery, it doesn’t resort to leaving you unarmed and defenceless throughout the game, it just unsettles you in the worst ways. Imagination is said to be the most powerful tool in scaring an audience, and Team Silent’s iconic game uses that tool to terrifying effect.

It does also use more traditional methods to scare the player, however. The sound design is astonishing, with an attention to detail not often seen in videogames even today, such as recording several different footstep sounds for every surface to ensure that the sound felt natural and avoiding repetition. Most of the game’s atmosphere is created through the use of sound, with monsters emitting some truly eerie sounds as they scuttle about in the darkness. But silence is key too, and it is used superbly throughout.

Akira Yamaoka has gone on to record most of the soundtracks for the Silent Hill series, but moved on after Homecoming. His work on Silent Hill 2 earned him a reputation as one of the best sound directors in the business, with his music becoming as iconic as the game itself. So much so, that it was used for the Hollywood movie starring Radha Mitchell and Sean Bean. His beautiful and haunting music may seem at odds to the dark and twisted horror of a game like Silent Hill 2, but it works perfectly. It speaks volumes that it’s still remembered today, above more recent games.

To accompany the sound design, the visuals were also some of the best of the PS2 era. Textures were sharp and detailed, giving life to the characters and settings alike, and the lighting and shadows completed the look spectacularly. Shadows move realistically in the beam of James’s torch, reaching off into the distance and dancing around as he walks/runs. Considering this was only around a year into the life of the PS2, it’s an incredible achievement, even more so that it still stands up today, fifteen years on. Despite the downhill turn taken by the series after 2 (although 3 was still very good), it’s really down to this game that the Silent Hill name still carries weight now. It tackled themes that are only just explored more in mainstream gaming, and it’s likely that games such as Amnesia and Outlast wouldn’t exist without the influences of Team Silent’s game. Konami has struggled with the series since Team Silent disbanded, and the failed Silent Hill Collection on PS3/360 showed this.

It managed to take a classic game and ruin it, somehow making it look worse on more powerful consoles, and introducing sound problems that were never fully fixed, leading Konami to offer a free game on 360 as it abandoned any attempts to bother fixing it on Microsoft’s console. The PS3 version was eventually made a bit better, but it never fully recovered from that initial cock-up. Considering the original Silent Hill 2 and 3 were ported to PC with some success, it just shows how badly made the Collection was. This also begs the question: why has Konami not made these games available on Steam or GOG? And with the PS4 now getting access to some PS2 classics, surely making the original version of Silent Hill 2 available on PS4 would be a good idea?

On the game’s fifteenth anniversary, why not remember Silent Hill 2 as it was? Dig out your PS2 or original Xbox and play it for yourself. It deserves that much.