Gravel will be trying to reignite the spark of old, arcade racers when it releases 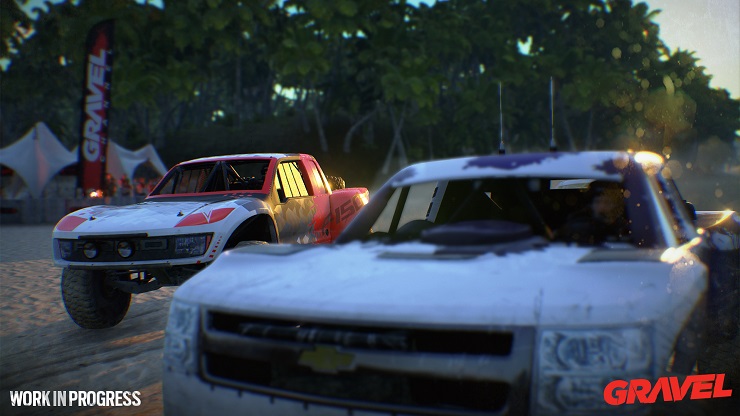 The racing games are in a good place right now. Forza and Project Cars have lead the charge for the genre, and with Gran Turismo Sport on the horizon, it cements that for the moment, simulation is king. With series like Need for Speed and Grid slipping into the background a little over the last few years, it seems the market has moved away from the arcade sub-genre in pursuit of a close to perfect recreation of real life on the racetrack.

Gravel is playing by a different set of rules. It’s a game that has less interest in being a hard simulation of the art of racing, and rather snuggling itself very comfortably in the realm of wild, speed-laden fun. Speaking to Head of Game Design at Milestone s.r.l. Irvin Zonca, when asked what Gravel will have that other in the genre don’t he said: “It’s something very different first of all, it is not simulation, and most the competitors out there right now are simulation. You can count on one hand the number that aren’t simulations. Maybe two, like Forza Horizon and the Crew… Specifically, think about Forza Horizon 3, a game I love. It about being part of a festival. One festival in one location. They have everything like Lamborghinis and Ferraris. We focus on off road racing and we deliver wild racing.

Gravel is something unique. It’s not a rally game, so it is not DiRT Rally, it’s not a festival so it is not [Forza] Horizon. It doesn’t have storylines so it is not The Crew. It’s more a sim-cade. It’s based on games found in the past, but you can’t find them anymore. It’s more like Screamer [a 1995 arcade racer] or something like that.” In fact, to say the game feels “arcade-y” almost has some literal connotations. Gravel feels like it would be right at home in a modern day arcade, something you’d find in a collection of cabinets at a bowling alley. That’s not to sell the game short either. In a world where the genre is more focused on slow, considered corners right now, there certainly is something to handbrake drifting around one. This comparison to something you’d find in a bowling alley actually seemed to excite Zonca who proclaimed:

“Yes! I love that description because that is what we were trying to achieve. It’s something different. It’s funny! You can have fun and play and not ask yourself why. It’s more about speed and overtaking everyone.”

So, what actually is Gravel? Taking you on a trip around the world in several pocket open worlds, it’s a game that will let you loose in some of the more “dangerous” environments on the planet. With over 50 cars to race with, you’ll be taken on a journey from beaches to snowy mountains, all built around the framework of a TV show, working kind of like the festival idea in Forza Horizon. On the structure, Zonca said: “Yeah, we took inspiration from some American TV shows where off-road racing is the focus like Baja. So, it’s something very light, the game is more focused on racing. But you know, it’s a plus because you think, ‘now I have a structure I’m put in. I have opponents and I want to become the best one’. It’s not really a storyline and it’s not something heavy, but you will have some full motion video which will introduce you to different steps in the competition.”

Having spent a while with the game on a beach map, it became very clear the nostalgia that Gravel wants to draw from its players. It has a real late 90s vibe, with rock concerts played on open beaches, and drums of fire buried into the sand. It really does have that tinge of corporate brewed ‘teen rebelliousness’ that ran rampant around the turn of the century. There’s a tiny something homely to that feeling.

One thing the game has kept from that time is its look too. The game looks a little rough in its current state, with cars looking blocky and details looking a bit like stickers rather than dynamic objects. However, it’s early days on that front. Gravel still has some time to come together on the graphical side of the coin. In terms of play, Gravel certainly wears its less realistic aspects on its sleeves. The cars feel like they’ve recently applied several layers of soap to their wheels as it is clear Milestone really want ‘drifting’ to be a part of the gameplay loop. In true arcade fashion, you’ll get points for elongated drifts, with score counters into the thousands flying over your screen. You can also get these points for little stunts and going particularly fast too. While not exactly encouraged or rewarded, I also found myself crashing into and flipping over a couple of my opponents. It all feels really wild, which also feels like kind of the point.

One thing that did seem a little at odds with this focus on fast and pure fun though was in the race I got to play through. It’s laps were well over three minutes each, meaning a full race of three laps took over 10 minutes. This may well have been a case of Milestone wanting to show off the scale of its map, but it was hard to maintain that arcade-y enthusiasm over such a long period of time. Luckily, it was just one race of which there are said to be hundreds, across different modes like Elimination and Waypoint. In short bursts, this style will most likely be much more palatable.

Gravel is certainly boasting a feel unlike much else in 2017. That will be to its strength almost certainly. To those nostalgic for when racers had score attacks and bright colours like the kind you’d see with an elaborate arcade cabinet, there’s certainly promise here. How far the depth of the racer will go remains to be seen, and it certainly has stiff competition from others in the genre right now. Most racing games can last you tens of hours if not more, and while it feels completely different to much out there right now, Gravel will still need to keep the same kind of staying power. The game also needs a fair lick of paint to hang with other racing titles. It’s focused on fun over simulation, and that gives it some leeway for not needing to look like a photo-realistic simulation of the cars it portrays. Having said that, a good touch up would go a long way. There’s most certainly a spark of something different here though, or at least different for the state of racing games right now. It’s actually an old spark, but one that has been lost in the race to recreate reality. That is what Gravel will need to trade on if it is to succeed.

Milestone announces GRAVEL
Support us on Patreon for exclusive content