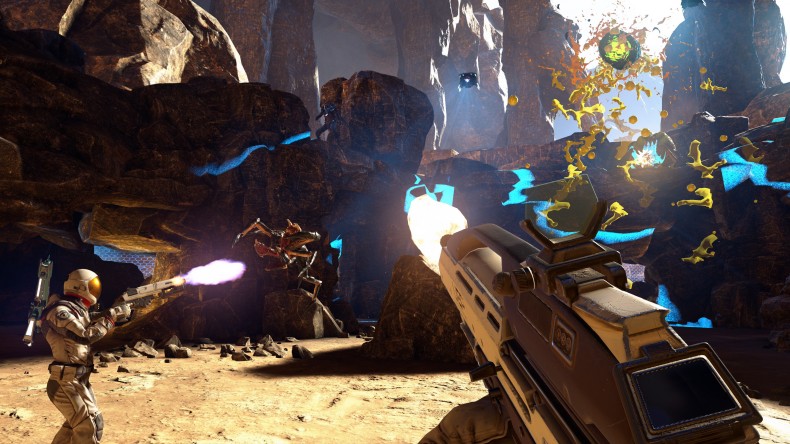 Last week, I attended a PSVR Showcase where I had the opportunity to test out a number of games and experiences using Sony’s virtual reality headset. As a HTC Vive owner that had only briefly experienced PSVR at a preview event last year, I was excited to compare how well it stacks up against the Vive. Unsurprisingly, the Vive still takes the top spot for me, however, I was particularly impressed with the variety of virtual reality experiences that Sony currently have on offer. The showcase had a solid selection of games and also gave attendees the option to test out some of the 3D-VR-360 video experiences on YouTube. If you’re a fan of the BBC’s Planet Earth, this experience is certainly for you. First Life VR whisks you along the ocean floor, while David Attenborough narrates, bringing you face-to-face with long-extinct prehistoric animals. At fifteen minutes long, this experience felt incredibly calming, all the while informative and educational.

This experience was originally developed for use in the Natural History Museum but has now been ported to PSVR. While it suits its intended setting perfectly, I also think it would do well at home, serving as a great introduction to virtual reality for those that have not been exposed to it before. All of the movement in First Life VR is quite gentle as it requires you to stand still and move your head to look at each of the creatures. It may sound as though First Life VR is quite short, especially when you consider the fact that it retails at £5.35 on the PlayStation Store. However, I think its the perfect length as it doesn’t give you time to get bored. If anything, I’d like this to be part of a series that explores other regions and creatures, too. Accompanied by David Attenborough’s soothing tones, First Life VR is probably the best place to start your PSVR journey. Players begin the game by placing a base at one end of the map. The aim of Korix is familiar and simple: build a strong base while acquiring more territory. In the demo, I placed walls and lasers which could be upgraded to cope with the waves of enemies that began flooding in from the other side of the map. I was also encouraged to place workers and soldiers in my base to generate more money that could be spent on more defences.

Korix opts for a minimalist artistic approach which makes it a lot easier to spot enemies from far away while you’re busy fortifying your defences and setting up lasers. You’ll spend most of your time placing objects and will need to spin the map around quite frequently, so the Move controllers felt slightly more natural than a regular PS4 controller in that regard. However, the Move controllers don’t feel anywhere near as comfortable as the Vive controllers. You’ll still be able to see all of the necessary buttons labelled on the controllers in VR, but the square layout of the buttons just feels slightly off here, especially when the difficulty ramps up and you have to place objects faster.

I can’t say that Korix is a game that everyone would enjoy, but it’s nice to see that this genre is available in PSVR for those that want to play it. Before playing StarBlood Arena, I was already bracing myself for the inevitable wave of motion sickness that was sure ruin my enjoyment of the game. As someone that is particularly sensitive to movement in VR, I was unsure how severely this would impact my experience with this game. I was therefore relieved to discover that I didn’t feel ill after a few rounds blasting up the bots in the demo. In fact, after getting to grips with the controls, I started to have a lot of fun.

Opting for vibrant, cartoony style, this game will have players flying around in various ships, engaging in fast, arena-based combat. StarBlood Arena is a good demonstration of how developers will be experimenting with VR shooters for years to come. It’s developer, Whitemoon Dreams has tried to map the controls in an intuitive yet unique way. Many players will be used to locking-on to enemies by pushing R3 on a PlayStation controller, something that you wouldn’t necessarily expect to change in PSVR. However, Whitemoon Dreams has customised the controls, encouraging players to lock-on to enemies simply by moving their head and focusing on them. At points, I may have been thrashing my head around a bit too energetically, but this is still an interesting way to shake up the shooter experience. The majority of the controls are still located on the PS4 controller, so it won’t take players very long to adjust. Once I felt climatized, I also began to notice the game’s potential.

Overall, StarBlood Arena gives us a good idea of what we can expect from seated VR shooters and it looks as though we’re off to a pretty good start. Movement is always a concern with these types of VR games and I’m sure that some players may not appreciate Whitemoon Dreams’ approach, especially if they suffer with severe motion sickness. Nonetheless, if you own PSVR, and want to jump into a shooter, StarBlood Arena is worth checking out. One thing that often stops me from playing a lot of VR games at home is that most of them are single-player. Virtual reality headsets are an expensive luxury so it sucks that many VR games still focus on single-player experiences. Thankfully, developer Firesprite feels the same and has consequently created a stealth-horror title that caters to those of us that want to play VR games with our friends and family.

The Persistence places players on a research vessel, destined to study a collapsing star. You probably already know where this is going: something goes wrong, there are some nasty enemies lurking around the ship and you need to try your best to survive. The similarities to classic space-horror stories end here though as Firesprite are going above and beyond to ensure that this VR experience is different to others in the genre. Thanks to procedurally generated levels, each time you die, you’ll respawn as a new character on a different ship, which will be teeming with a variety of threats and items. As a result, you could argue that The Persistence already sounds quite promising, but what really makes it stand out is its multiplayer element.

This game supports up to five players: one using the VR headset and four using a companion app on a tablet or mobile phone. Players using the app will have access to a map of the ship that player one is wandering around on and they will be able to see one room ahead of them, in any direction. Items and threats are marked as question marks on the map and the tablet players will be able to tap these for more information. It’s up to the additional players to decide whether they want to help or hinder the player in VR in exchange for points, and this is what makes The Persistence look awesome. For example, let’s say that you’re using the app and your friend is using the headset. They’re about to enter a room with two enemies inside. Upon checking your map, you notice that you’ll gain points if your friend defeats the first enemy but will lose points if they defeat the second. You’ll want to help your friend defeat the first enemy by tagging them and periodically freezing them, to ensure that your friend wins the fight. However, you can also choose to remain quiet about the second enemy and hope that they kill your friend so that you can rake in those extra points. To make the stakes even higher, you’ll also be competing with the other players that are using the app as they’ll have different motives to you.

I really like the ideas that Firesprite are experimenting with here and I’d definitely like to try this out again with a group of friends. Whether you want a solo stealth-horror experience, or fancy an evening of jokingly betraying your friends’ trust, you should try out The Persistence.

Farpoint was, without a doubt, the highlight of the PSVR Showcase, for me. I’m a giant baby when it comes to dealing with spiders in real life but I didn’t have any problems shooting spiders twice my size in Farpoint. If you’re unfamiliar with this title, it’s a first-person shooter that leaves you stranded on a dusty extra-terrestrial landscape that is crawling with eight-legged foes.

The demo made use of Sony’s PlayStation VR Aim Controller which, despite its basic look, felt very comfortable to use. Developer, Impulse Gear, has tried to use the Aim Controller to its full potential, enabling players to quick-swap between weapons by knocking their gun back, utilising the front buttons for regenerating health and launching rockets, and adding extra options to the buttons located on the back of the controller.

One of the aspects that didn’t feel as natural in this game was the movement. Players traverse the world using the analog stick on the Aim Controller, but in VR this made me feel as though I was gliding along the floor, rather than walking. This wasn’t as noticeable when I was weaving in and out of the rocks that I was using for cover, but in the stretches of land between the enemy encounters, moving felt very strange. I understand that it’s difficult to achieve natural movement when utilising hardware that doesn’t support room-scale (where you can literally move around), but it appears that this is something that developers will need to continue to work on in PSVR. That aside, Farpoint looks amazing and I’d love to play the rest of it with a friend. I’m a huge fan of first-person shooters so finding one of this calibre so early on in PSVR really impressed me. If I didn’t already own a Vive, this game may have swayed me to invest in PSVR.