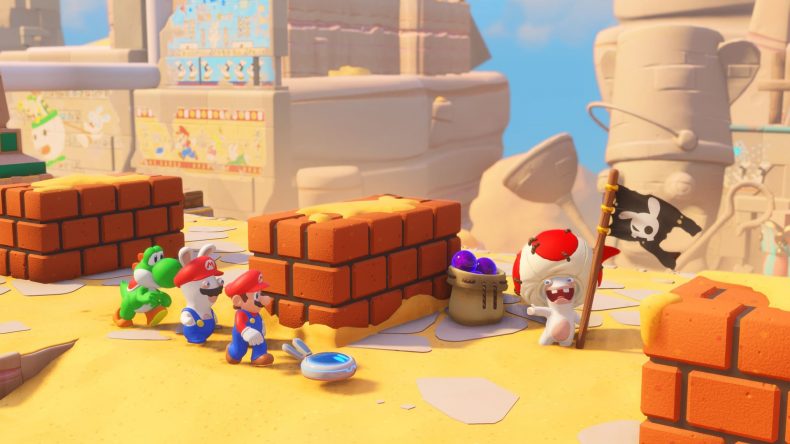 I would never describe myself as a hardcore Rabbids or Mario fan. Strategy games, however, are king: be it turn-based, real-time or even the dreaded MOBA. I’ve enjoyed many a night burning the midnight-oil for that “one more turn” invariably lasting until sunrise. XCOM 2’s E3 expansion reveal was a personal highlight of the show for me this year: while the base game had its fair share of issues I am still more than happy to dive back in at the cost of a few evenings. So it goes without saying that the Ubisoft reveal of Mario + Rabbids Kingdom Battle caught my interest – albeit with some trepidation.

My immediate concerns were that Kingdom Battle would forgo complexity for the sake of accessibility, thus never reaching the same level of its competitor. Mario and Rabbids are both family orientated licenses and their titles are naturally targeted towards younger audiences, so some simplicity is to be expected.

After a few hours of hands on, though, it seemed my caution had been misplaced. My fears of it being nothing more than a re-skin seemed almost insulting now. From what I played it appears that Kingdom Battle has taken the XCOM framework, added the unique charm of both of the titular franchises, and made it their own with new, interesting ideas. It’s less filler, more killer For example, the pipes used to traverse levels in the original Super Mario games have been incorporated here true to form, allowing for quick movement around levels which, used in conjunction with the jump ability, creates a much more mobile and fast paced combat. The lack of fog-of-war was another missing shackle, so I was no longer carefully edging forward wary of ambushes and instead charging forward with abandon.

Carefully positioning and overwatching my squad behind the best cover available took a backseat in favour of propelling them off of enemies so I could smack them with a hammer. Most of the mission’s main objective was to simply reach point B, with various obstacles in the way, such as ghost traps that when activated would teleport the character to the other side of the map. Alone. Never a good spot to be in.

Even the time you spend preparing in between battles is minimal: there appears to be no base to upgrade, no tech to research, no staff to manage and no global map to traverse. Instead you have some simple puzzles, one involved reflecting light via mirrors, which while hardly a devilish challenge like those faced in The Crystal Maze, it was a nice change of focus. The progression system is simple, each character has unique skill trees that allow you to specialise in the way you want: extra jump damage, more health, more overwatch shots, etc. You can purchase new weapons each with various traits. The “Bounce” trait for example would push enemies in the direction they had been shot, usually out of cover and off of the map, dealing extra damage. All of this with the same intuitive design that has become a staple of a Nintendo title. Mario and pals are not out of place here.

The main hook that caught many players of the XCOM series is the stories they created for their soldiers, the personality that they imposed upon them from a few innocuous lines of dialogue and a terrible haircut. Some modeled their squad on real life friends and co-workers while others recreated celebrities, characters of fictions and world leaders.

Mario + Rabbids Kingdom Battle currently does not have this self creation process, half the cast consists of the most well known and recognisable characters in video game history – the Prime Minister of Japan dressed as Mario at the Olympic closing ceremony for goodness sake. Capitalising on this, the Rabbid characters I faced were written as foils for the Nintendo cast. The Rabbids could never realistically compete for the spotlight, so why bother? A supporting and antagonistic role fits them perfectly here. The boss that I fought was a ghostly opera singer who throughout the fight, threw some pretty decent digs at Mario that even I chuckled at. Touching on his overused catchphrases, terrible luck with women and his (let’s all finally admit it) poor moustache. It was the right side of charming and a good few shades away from obnoxious.

I am very interested in seeing what the full game has to offer and what it will add to the XCOM formula. Competition breeds innovation, and this could be the shake up the scene needed.

Mario + Rabbids Kingdom Battle is a Nintendo Switch exclusive, coming out on August 29, 2017.