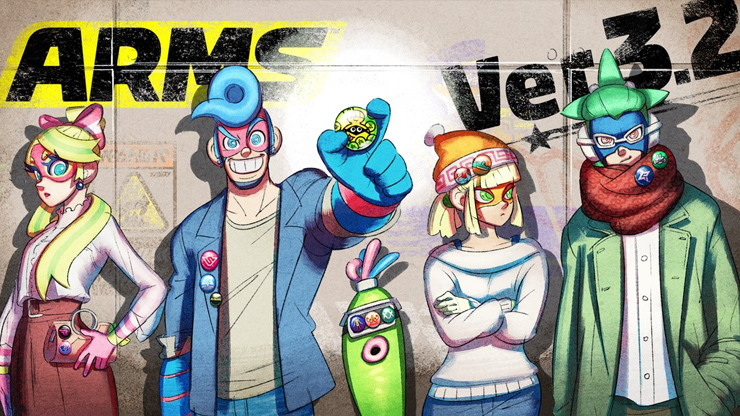 This update adds a lot. The full patch notes including balance fixes can be viewed here.

Outside of balance changes and fixes, the following are the update notes:

Added new “Badge” feature.
Receive neat badges as a reward for fulfilling certain conditions.
Wear your favorite badge and show it off to your opponent.
Added new “Recent Replays” feature.
Select from a list and view replays of past matches.
Replay data is automatically deleted when necessary, starting with the oldest data.
Also, future ARMS updates will cause all replay data from past versions to be deleted.
During replay playback, ZR will no longer switch between targets. The X button instead is used for all camera angle switching.
During replay playback, + – buttons no longer toggle HP gauge display, and instead now bring up the menu.
Fixed issue where, at certain timings, follow up attacks after wind attacks would not land.
Fixed issue where, after suffering an ice attack, players on a snake board could repeatedly jump and the snake board would continuously accelerate.
Fixed issue where, when battle rules are set to 1-punch KO, under certain conditions fighters would become unable to move.
We’ve identified an interloper who has been disrupting the Grand Prix, going after our fiercest competitors. If encountered, we advise you to dispatch them with prejudice.

Watch the video showcasing the update below:

ARMS is available on Nintendo Switch. Read our review of it here.