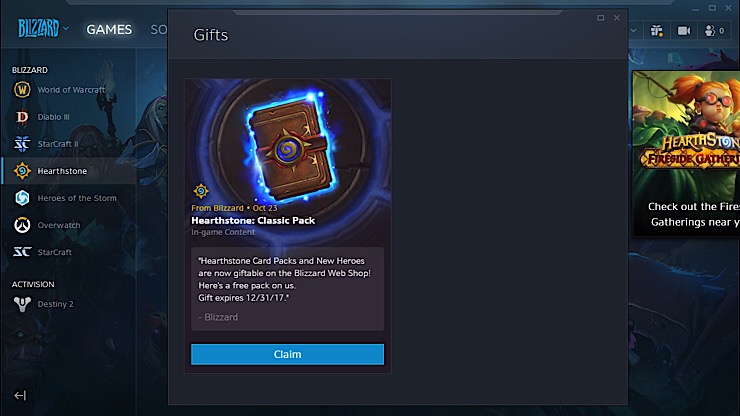 Blizzard has brought a new social tab to the Battle.net platform that allows you to gift things to other players, and more.

First and foremost the ability to message someone offline has been added, which means you’ll be able to contact a friend and they’ll be able to pick it up when they next log in. This will work across the platform and across the iOS and Android apps as well.

You’ll now be able to create groups for chatting no matter what you’re doing, say you’re getting ready for a raid, and your friend is playing Hearthstone, while another person is cheering on their favourite Overwatch team, you’ll all be able to talk together no matter what it is you’re doing.

If someone on your friends list has a birthday coming up you’ll be able to purchase something for them, like an Overwatch loot box or a Hearthstone card pack and gift it to them through Battle.net.

You can now also select an avatar to represent you online and also customise a profile to describe just what type of person you are….as long as you don’t act like your Twitter persona. Not only that, but you can now, finally set yourself to appear offline, so you can game in peace without distractions…but it’ll be awkward when your friend logs on to WoW and finds you picking flowers.

So, thanks that. All things many other platforms were already doing, but now available from game to game and platform to platform.

A lover, not a fighter and an all round good guy (he would say that, he wrote this after all), he's happy to be here as part of GIAG.
MORE LIKE THIS
ActivisionActivision-BlizzardAndroidbattle.net