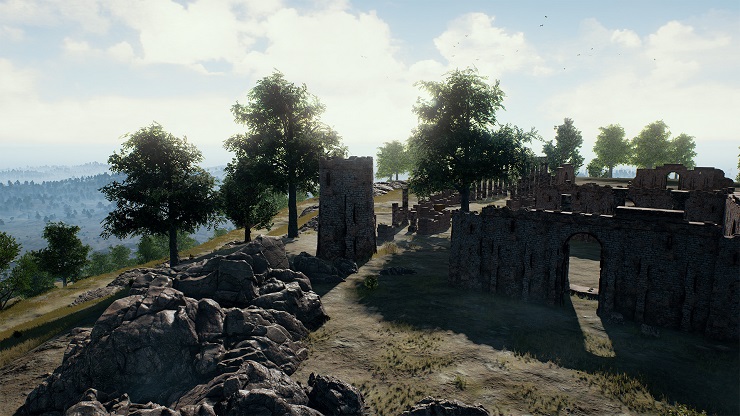 A phenomenon. There is really no other way to describe PlayerUnknown’s Battlegrounds, is there? After releasing on Steam via Early Access back in March, it has grown exponentially. Within a couple of weeks of its release, it had sold over one million copies. One. Million. Some AAA releases don’t reach that in a year. Yet here we are, less than a year after its early access release and reaching full release as of 20th December; PUBG’s sales sit at around twenty million. That’s even before counting the recent Xbox One Game Preview release.

If you’ve been Gordon Freeman’d and only just come out of stasis, you might be wondering what I’m talking about. Also, stop waving that crowbar at me. Rude. PlayerUnknown’s Battlegrounds is the brainchild of a man named Brendan Greene, who had previously created a mod for Arma 2 that took DayZ’s PvP survival idea but mixed it with that of the movie/book, Battle Royale. Eventually the game would become its own thing, thanks to Korean company Bluehole, and so PUBG was born.

Up to one hundred players are pitted against each other, tasked with being the last man (or woman) standing. Although that sounds simple, PUBG adds a caveat or two to spice things up; every player starts aboard the same cargo plane that flies over a giant map, and it’s up to each individual to decide when to jump, at which point they’ll skydive and then parachute to their chosen location; everyone enters the ‘arena’ with just the clothes on their back, meaning they have to scavenge randomly-placed weapons and supplies from buildings on the map; finally, every few minutes the play area will shrink to a designated blue circle on the map, killing anyone caught outside of it, until only one individual or team remains. Quite honestly, I’ve experienced very few games that can match PUBG for tension. From the moment the round begins and you’re plotting your dive and subsequent landing zone, you’re keenly aware of the sheer volume of other players that you’re up against. When you do decide to jump, accompanied by the gunshot-like ‘bang’ as you begin plummeting to the earth, you can almost guarantee that others will have jumped at around the same time. Indeed, when you pull the cord and the parachute slows your descent, you will find yourself anxiously looking around to see if any other ‘chutes are visible nearby.

Like many others, I discovered PUBG via Youtube. Including our very own miniseries featuring Adam and Chris. At the time, my PC would have melted at the thought of running the game, so I watched a few videos and resigned myself to waiting for the Xbox One version. This meant that I learned a few things beforehand, such as the need to switch an automatic rifle’s firing mode so that it isn’t on its default single-shot setting, though that didn’t stick originally. We’ll come back to that later. I learned that if a building’s door is open, you should steer clear; it will either be ransacked of weapons and supplies, or worse, somebody is still inside. A lot of things seem like they should be second nature, but we often forget that genuine survival is rarely a part of PvP shooters; sure, you don’t want to get shot, but the simple fact that respawning exists removes any feeling of real self-preservation. But if you die here, that’s you done for that match. No second chances. Trust me when I say that you cannot rush in; PUBG is about the long game. Assuming you have the skill (or luck) to last until the end.

Before you get to that chicken dinner though, you’ll have to experience the terror of your first jump. You’re stuffed onto a plane with up to ninety-nine other people, knowing that any one of them could be your killer. You’ll study the map, to see from which direction the plane enters the combat zone, and you’ll make the decision when to jump. Thoughts rush through your mind; about whether you’ll find a weapon or not, about who else is landing nearby, and about where that first circle will be. If the circle is on the other side of the map, you’ll have to book it to get there in time. Do you choose to drive that car and have the engine noise give away your location, or sprint across the fields and leave yourself open to snipers? Either way, you will be looking all around you at all times, nerves frayed from the ever present threat of death. It’s a cheery game, is PUBG. I still remember my first game, as I nervously touched down near a cluster of small houses. Nobody landed nearby, as far as I could see, but I still rushed straight into cover and began searching houses for weapons and body armour. I was lucky enough to find an assault rifle (I think it was an AK or something similar) and after clearing out the houses nearby, I found a parked car and decided to take the risk of driving to my next location. Turned out to be a mistake, as I discovered soon after entering a large house in a clearing close by. In the middle of my scavenging, I caught sight of someone outside, through the front window; they had either been drawn to the house with the closed door (always close it behind you, just in case) or, far more likely, heard the car engine and decided to let the hunt begin. “Fuck it,” I thought, as I raised my gun and opened fire through the window. Or would have, had I not forgotten to switch to full-auto. That brief moment between the confusion and realisation of what had happened, was all that was needed for my target to put a few bullets into this idiot, thus ending my first experience of PlayerUnknown’s Battlegrounds. Still, I wasn’t the first one killed, so that was a plus point for me. It lessened the embarrassment.

Luckily, in my second game I didn’t forget to toggle full-auto on for the SCAR that I found. Not so luckily, the second circle was miles away, over the river. Now, if you know this game at all, you’ll know that crossing the bridges is a game of death. Teams love nothing more than to camp at one end, happily murdering anyone trying to cross; so I decided to find another way. I’d sprinted most of the way to the river, but found a jeep within a few hundred yards of the bank. I wasn’t the only one who’d spotted this potential lifeline, with time rapidly catching up to us and still a fair distance from safety, but this time I was quicker on the trigger and thus I got my very first PUBG kill. Of course, my relief was short lived. Shortly after entering the jeep and embarking on a quest to find a good crossing point, another vehicle began chasing me; bullets peppered my poor jeep and despite doing my best to lose my pursuers around buildings and through fences, my match soon came to an end via a bullet to the brain. A car chase isn’t a bad way to end a match, at least.

These are just a couple of stories that come from the countless online battles of PUBG, many of which can be found on Youtube and various streaming platforms, and every single one is just a small part of what makes the game so special. Special mention has to go to its sound, however. Much like a horror game, most of Battlegrounds’ atmosphere comes from its excellent directional sound and how it helps to heighten the tension of every moment. Scavenging is a terrifying experience, but when you hear gunshots in the distance or the sound of a vehicle passing by, or especially when you hear a door opening in the building you’re currently checking; so many games neglect this level of detail in their audio, but PUBG is up there with the best. Playing with headphones is an intense experience, but also the best.

Every year, a few games come along that surprise everyone. Some are Youtube sensations like Five Nights at Freddy’s, others find a footing thanks to the likes of Playstation Plus (hello there, Rocket League), but I don’t think anything has come close to the explosive popularity of PlayerUnknown’s Battlegrounds.

I can give you twenty million reasons why it’s 2017’s biggest surprise.