previous
Warframe: Shrine of the Eidolon is coming to PS4 and Xbox One next week
random
next
NARUTO SHIPPUDEN ULTIMATE NINJA STORM TRILOGY releases on April 26 on Nintendo Switch
0 comments

Is the contrast between Far Cry 5’s story and its game play too jarring? 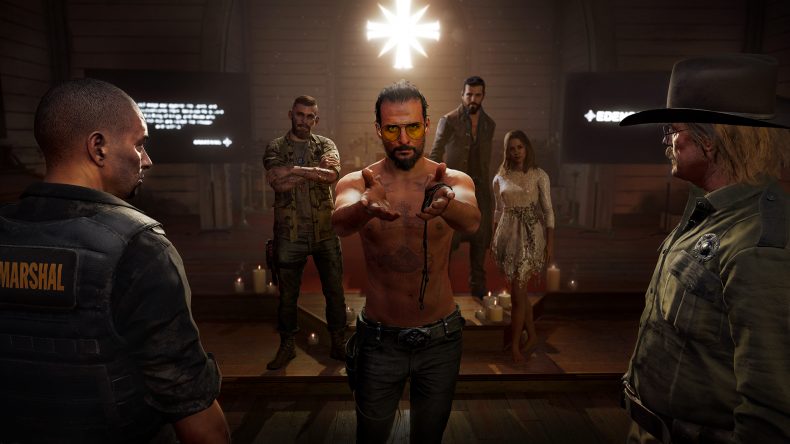 The helicopter soars across the stuffy Montana night and the tension within is palpable. Six people – a pilot, co-pilot, marshal, federal agent, a copper and yourself – are en-route to go and arrest perhaps the most dangerous man in America. The marshal is terrified and implores the bullish agent to call off the mission, but brimming with bravado and blinded by arrogance he presses ahead to the compound. They land in the mud and the spooked, hushed whispers of the locals immediately begin to pick up: “Who are they?”, “What are they doing here?”, and “Have they come for the father?”

You go deeper into the compound, through gates that resemble Auschwitz, lambs voluntarily walking to the slaughter house. Vicious dogs bark, crazy people’s eyes follow you, the whispers grow louder, but all that is drowned out when you get to the church at the heart of the compound as angelic singing fills the air. You go inside and there he is. The leader of the Project of Eden’s Gate. The Father. Perhaps the most dangerous man in America.

His flock are startled, but he calms them and tells them it’s all god’s plan. He allows himself to be handcuffed, but not without exclaiming with complete and utter certainty that “God won’t let you take me”. Guns out you rush back to the chopper but things go awry. The Peggies don’t want you to take their leader. They begin to throw rocks. They begin to hit you. You get to the chopper, but it doesn’t help. They are selfless, devoted to their Father. As the chopper takes flight they launch themselves on. They try to pull you out to no avail. But there is one on the front of the helicopter. What? It looks as though the nutter has just thrown himself into the propeller, sacrificing his own life, to bring the whole thing crashing down. You awake upside down in a spangled mess of burning metal, and who’s there to meet you but a chirpy, I-told-you-so Joseph. He emerges from the blaze to his followers like the rebirth of Christ and then he sets his acolytes upon you.

This is how Far Cry 5 begins and just like the previous numbered entries in the series, we’re immediately introduced to the main villain before having to run for our lives out into the open world. It’s a very strong opening that sets Joseph Seed out as perhaps Far Cry’s most captivating and interesting villain yet. He may not become as iconic as Vaas Montenegro, but there’s something about Seed that’s unsettling and makes your skin crawl, and I think it’s that he’s a character that can, and in fact has, existed in real life.

Framing his own ideas around religion and his holier-than-thou language, Seed makes a striking resemblance to Jim Jones, the cult leader who took over 900 Americans to the Guyana jungles to create a settlement and then ordered their murders, or “revolutionary suicide” as he called it, after Congressman Leo Ryan turned up in Jonestown to try and take as people many as he could back home. All but two of the 918 people murdered at Jonestown were killed by either voluntarily or forcibly drinking Kool-Aid spiked with cyanide. Congressman Ryan, some of his colleagues and some of those he tried to save, were shot and killed on the runway as they tried to leave the country. It’s a fascinating, terrifying story that I recommended you look up, which not only show the real life inspiration for the crazy, charismatic cult leader, but shows plenty of other real life parallels as well. The opening to Far Cry 5 sets a very dark, psychological tone and this is backed up when you see some of the horrors that the Project of Eden’s Gate are committing throughout Hope Valley. Kidnappings, forced indoctrination, crucifixion, the mass burning of people alive, feeding starving children the charred flesh of their parents: there is some disturbing, fucked up shit in Far Cry 5.

However, this really dark subject matter and story line clashes with the silly, balls-to-the-wall, constant action of the moment-to-moment gameplay. You can go from a mission in which you have been kidnapped and psychologically tortured in attempt to make you a brainwashed soldier to doing extreme quad bike stunt races in honour of legendary stuntman Clutch Nixon. You can go from watching an ally getting their brain smashed in with a baseball bat to rescuing a friendly grizzly bear with diabetes called Cheeseburger who will fight by your side.

It’s not to say that those things aren’t a blast to do (because let me tell you, Cheeseburger is a legend), but it’s just so jarring with the story Far Cry wants to tell that it causes a bit of ludonarrative dissonance. Imagine if in the middle of The Last of Us Joel decided to go wing surfing down a mountain. It’d be weird, wouldn’t it? It makes me concerned that people will expect Far Cry 5 to be more meaningful than it actually will be due to the obvious parallels to the current political climate. So it makes me wonder: is a game able to take on such serious subject matter and still be “fun” to play. I’ll stick with The Last of Us because it’s not as if it was a drag while playing, but everything you did made sense within the world and the predicament. Yes, they are obviously very different games and Far Cry has a brand it needs to stick to, but I think this could end up being a missed opportunity as the story seems so good that the rest of the game should follow suit.

Far Cry 5 Associate Producer, Phil Fournier, said: “I think for me, the most important thing is offering a wide variety of feelings. Like life in general there are some super fun moments, there are some more serious moments and I think a game can be the same. I think it was important for us to really, really be able to have more earnest moments where you can really experience all of that.” It’s an interesting viewpoint to have. Far Cry 5 is creating a world that feels very lived in and organic, with countless characters you can talk to that just aren’t mindless NPCs there waiting for you – they have their own lives to live and all of them just aren’t focused on destroying the cult all the time. One of the changes from previous entries in the series that I really like with 5 is that most missions won’t just appear as a marker on the map once you’ve been up a tower anymore, you actually have to talk to people to find out what’s interesting near by.

But yet, it just feels like to me that the fun, bombastic nature of the game will be too harsh of a contrast with the very serious, and interesting main story – so much so that maybe it should have been its own game and not be stuck with the Far Cry expectations. It may be an unfortunate coincidence that Far Cry 5 has ended up being so culturally relevant, but I foresee people being disappointed that Far Cry 5 won’t say something meaningful enough with the subject matter its chosen to deal with. We’ll find out soon, I suppose.

Ubisoft paid travel expenses to Paris for this preview.
Liked it? Take a second to support GodisaGeek.com on Patreon!