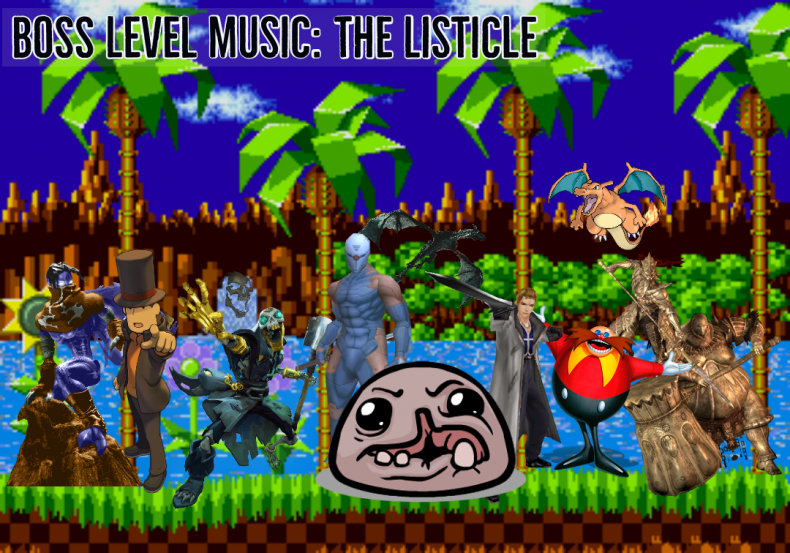 There’s nothing that gets the blood pumping and adrenaline rushing quite like a boss fight. Although, if the music for the boss fight is of absolute banging quality then it makes that jump to an epic fight that will stick with you for years to come.

With that in mind I thought I’d treat you 10 of my all time favourite boss themes. The themes that have stuck with me through my numerous video gaming years and can easily transport me back to that memory of my first encounter of their respective boss level. I can remember playing a fair few games when I was younger but nothing made as big an impact as the Final Zone in Sonic the Hedgehog on the Mega Drive. Up until that point there was always the fall back of grabbing a ring or two just in case you take a hit, but this safety blanket is yanked away for the last fight against Robotnik/Eggman. You either get crushed or take a hit from the energy balls that appear, both leading to an insta kill.

Luckily 5/6 year old me (can’t quite remember) persevered through the stress of the insta-death and I eventually got that ending.

As if fighting one Dark Souls boss wasn’t hard enough you get two thrown at you for the fight against Ornstien and Smough.

The first time I ever played Dark Souls I had such an awful time trying to get past these two. Eventually I grew to love this fight as it challenged me unlike any other boss outside of the DLC and their theme fits the fight perfectly.

What’s not to love about it? There’s a full orchestra with amazing brass kicking in as the music builds and the choir helps mix everything perfectly. Even if I have no clue what they’re actually singing. I may be biased as VIII is my favourite Final Fantasy game of the series but Force Your Way just delivers. I can’t listen to it without all those past boss battles rushing to the forefront of my mind. The way the music builds and continuiously climbs up the musical scale is perfection.

Also, the Distant Worlds version of Force Your Way is something that needs to be listened to if you haven’t had the chance already.

The Champion Battle Theme compared to the rest of the battle themes in the original Pokémon series stands out thanks to it sounding so totally dramatic and over the top.

There’s also the slight tinge of panic I get anytime I replay Pokémon and get to this stage as I always forget if I’ve saved and healed my team before I started the battle.

I also love the fact that your rival who’s the champion and only gets to be champion for what feels like 5 minutes by the time you hand their arse to them. Get it roon ye Gary Oak! I love and hate the Skeleton Ship theme all at once. The hate part comes from the fact that I’m about to take on a skele ship, usually on a solo run which isn’t easy especially if I get hit with a jig ball, but the love part comes from it being so dramatic.

It kicks off with a loud trumpeting fanfare mixed in with strings and uses the old creepy sound effects with a fast few notes on additional string instruments with a chorus making a weird “oooing” type noise kind of like how the wind sounds. Look, perfectly describing chorus sounds isn’t my forte but I’m trying.

The best thing about this theme though is around the 2 minute mark. If you listen to it carefully you’ll hear the SoT main theme but much spookier and more in fitting with a big ship battle. There is no shortage of music in Skyrim, with the album totalling 53 tracks and over 3 and a half hours worth of tunage. However, I have somehow managed to pick out one of the more boss-like themes in the form of Watch the Skies.

Watch the Skies is what you’ll hear as a dragon fight kicks off and you know it’s about to go down when you hear those drums, and then the chorus, kicks in. The drums are usually accompanied by a dragon roar which will cause you, or possibly just me, to stop dead in my tracks, pull out the warhammer and frantically scan the skies. Mostly cause I’ll have been caught short with barely any health items and, knowing my luck, will be an ancient dragon deciding to show its face. The boss theme for Metal Gear Solid is probably the best theme out of the whole Metal Gear series and it’s all thanks to the Snake vs. Gray Fox fight.

Aye, the other fights are good but nothing compares to the Gray Fox character. I loved that up to this point I’d been using guns and stealth to get my way around but this fight forced me to ditch that and go full on hand to hand.

The voice acting helps a massive deal for some reason. No offence to the Twin Snakes remake but I feel Greg Eagles absolutely smashed it as Gray Fox in the original. I can’t state enough how much I love Legacy of Kain: Soul Reaver and part of it is due to its particular boss theme.

There’s a bit of background to this song. It’s known as Ozar Midrashim, which was composed and released by a group called Information Society, before it became the main theme for the Legacy of Kain series.

Throughout the series you’ll hear different versions, depending on the circumstances, but the best one is the Kain Encounter which plays at the end of Soul Reaver with Raziel facing off against Kain in attempt to stop Kain from activating a magical time machine.

I don’t know what it is that makes it so good but to me this seems like the perfect piece of music to accompany a 90s vampire game. I get gothic vibes from it but whether that’s an influence from the game or the music, who knows? Now while the Theme of the Diabolical Box isn’t technically a boss theme, as there’s no “traditional” boss fights in the Layton series, it’s the closest thing you’ll see to a boss fight when it comes to Professor Layton.

Layton and co. come up against the Diabolical/Pandora’s box main villain, Anton, where one thing leads to another and Anton loses his temper and challenges Layton to a duel by sword, as you do.

This leads to my favourite “vs. a boss scene” in the Layton series. Layton’s wee angry face is something to behold and his sword skills left me in awe. There’s a fair few types of boss fight in The Binding of Isaac; Vs Mom, Vs one of the Seven Deadly Sin, Vs Satan or even Vs Isaac but none of their themes hold a candle to the basic boss theme named Crusade.

Everyone that’s played BoI: Rebirth will have came across this theme as it kicks in at the end of the very first level. I can still remember the first time I played Rebirth (which was the first version of BoI I’d ever played after hearing how good it was from a couple of mates) and getting to that first boss room. I’m pretty sure the first boss I ever faced was Monstro and considering I had no clue what I was doing you can bet that bricking it was not a phrase strong enough to describe how I was feeling.

The tempo of Crusade feels perfect for the speed of the minor boss fights, as the fight against Mom, or even some other major boss fights, feels a little sluggish to me in comparison. The settling panic could also be the reason the fights felt so fast but I’ll just file this under one of the great unanswered questions in life.

And with that you have my complete listicle of boss themes spanning my something something years of gaming. Remember you can hit up my or the Geeks Twitter and let us know how much you agree, or disagree I suppose, with my musical musings.