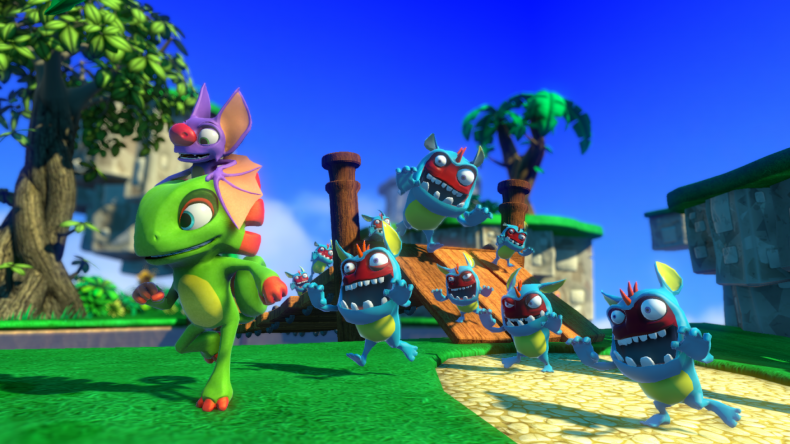 Yooka-Laylee and the Impossible Lair is now available to play, and with it comes the second game from developer Playtonic. You can read our review to see exactly why we loved it so much, and to coincide with its release, we sat down to talk with Harry Robinson, Design Director at Playtonic Games. With ten years of working at Rare, Harry has used his talents to help make Yooka-Laylee a special and exciting new franchise, and with the release of Yooka-Laylee and the Impossible Lair, it was interesting to find out more about the development and ideas that make it so much fun. Yooka-Laylee was a game designed with a colourful 3D world, so changing the style for a sequel seemed like a bold move. The 2D platforming works exceptionally well, with levels seeing plenty of design choices and ideas thrown into the mix. “We knew that after the original Yooka we didn’t want to go straight into another 3D platformer, because at Playtonic we want to be seen as a company that keeps its fans on their toes and you never know what we’re going to release next. We knew that we weren’t going to roll into a sequel – we wanted to do something different. With a 2D platformer it would be a really great next step. It was something we were confident we could do a good job of. We were excited about the prospect of doing it, so it just felt the right next type of game to do for the studio.” So if you’re doing a puzzle and could divert a river nearby that turned the level into a swimming level – it just organically grew from there. It wasn’t originally planned, but it gradually merged from developing the overworld along with the 2D levels. We wanted them to feel like a singular cohesive experience as opposed to these two disparate experiences. I think that’s what works really well, that you potter around the overworld and you’ll do something and it’ll feed back into the 2D levels.”

The humour is incredibly well-written and layered, featuring jokes that adults and children will find funny on various levels, and that was the plan of the writing team on the game. “That is kind of the aim. When you look at the best kind of animated films – like Pixar film or something like that – you can see that the writing is very clever. They’ll write a storyline that anyone can enjoy and understand, but they often have nods in for the parents. We do write it with that in mind, that there’re a couple of jokes in here and there that you’ll maybe get as an adult and you’ll miss as a kid. It’s tricky. It’s a fine line to get it right. One of the barometers is that if we think it’s funny – and we haven’t gone over a line – then other people will think it’s funny as well.” Having the final boss battle of a game at the start isn’t typical of most platformers, but it was something Playtonic definitely wanted to feature, and there was a clear reasoning behind this. “We thought it’d be cool to flip up the structure of a 2D platformer. Particularly with speed running in mind, and it being a popular thing these days, we thought it’d be a fascinating thing to see. How many people are going to jump in and finish the game immediately and ignore the rest of it. We think from a speed running perspective that will happen. I don’t know how anyone will manage that. I certainly can’t manage that and I’ve been working on this game for a while, but someone will manage it. There’s one person in the office that has done it, so we know it is possible. We’re really excited to see when that will happen, and we’ve got bets on to see when it will happen. Will it be day one, or is it week one?”

Playtonic has crafted something special in their second game to feature Yooka and Laylee. It has a lot of heart, and plenty of great levels that are both challenging and fun to play. However, they’re still a small studio, but with a stronger foundation this time around, they were able to focus solely on the development this time around. “The big difference with this game and the original is that we were still building the company. It was a challenging game to make whilst still building the company at the same time and having all the Kickstarter promises you want to deliver on. With this game, we knew what we wanted to make going in. We had our studio and we had everyone hired – we were in a really strong place. We could focus on making the best game we could, and make sure it was polished, such as making the gameplay really refined. We put a lot of work into making sure it was really responsive and fluid, and it’s something that takes time.”

Perhaps the best feature in Yooka-Laylee and the Impossible Lair is the Tonics. They’re a collectable that can be equipped to help make levels easier or more of a challenge, as well as adding silly visual effects that add variety and fun to the overall experience. Much of the studio had an input in choosing which ones were included. “We knew we wanted a lot of them because one of the key reasons to explore the overworld is to collect the Tonics. The overworld would’ve been a fairly empty place if there were no Tonics to find. We wanted those to be the reward for players who explore this vast world. We did a company-wide brainstorming session where we came up with ideas, then me and a couple of other guys whittled them down so we had a wide variety of Tonics to change the visuals and the gameplay.

We have to invest a lot of time into making them, so we had to think which ones would be a lot of fun. In terms of coming up with ideas we had loads. Some of them were ridiculous, but we love that. That’s how we work at this company. If someone comes up with something ridiculous, it might spark you to come up with an idea that’s not ridiculous. I love that free-from idea generation process where any idea is valid. Initially everyone is in that open mindset of, “what about this?” and “what about that?” You end up with ideas that one person would never have come up with if they were just sat in a room on there own. You get this broad canvas of creativity from all different walks of life, and have all different life experiences. We thought they’d be a great way of giving the game flexibility that suits them. If you’re struggling and pick up a tonic that helps then brilliant. Conversely, if you find the game too easy and you want a bit more of a challenge, then we’ve got you covered.”

Video games are cool. Don't let anybody tell you any different.
MORE LIKE THIS
Interviewplaytonic gamesYooka-Laylee and the Impossible Lair