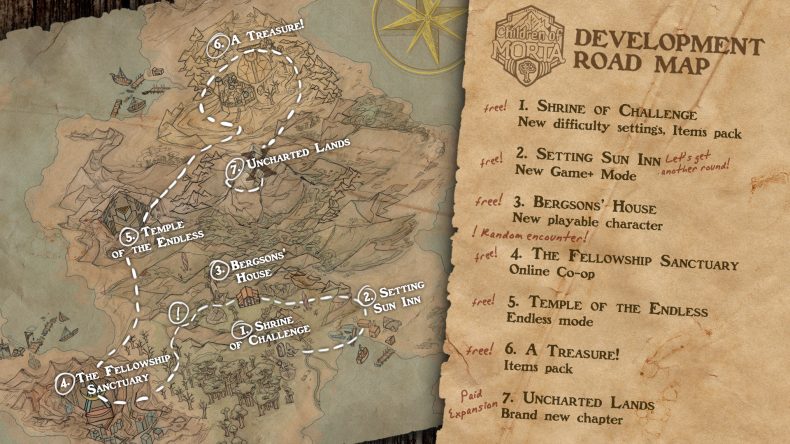 Today, Dead Mage and 11 bit studios have released their 2020 roadmap for Children of Morta, detailing tons of new content coming to their story-driven rogue-lite RPG. Apart from the Uncharted Lands expansion, all content will be free to everyone who owns the game, and there’s a lot to come.

-Shrine of Challenge (I) introduces hard difficulty and an item pack with more than 20 new items including Charms, Divine Graces and Divine Relics.
-Setting Sun Inn (II) invites you to New Game+ mode in which players carry their unlocked characters, skill tree, Morv, and Workshop Upgrades into a new playthrough after completing the game.
-Random Encounter (!) means what it says and says what it means – you’ll never know what you might find here!
-In the Bergsons’ House (III) a new playable character awaits.
-The Fellowship Sanctuary (IV) adds the much anticipated online co-op to the game.
-Temple of the Endless (V) contains a series of arenas with waves of enemies, mini-bosses, and a new boss. This Endless Mode fully supports online co-op.
-The Treasure (VI) update will contain more than 30 new items including Charms, Divine Graces and Divine Relics.
-All this should prepare you for The Uncharted Lands (VII). The next journey for the Bergson family will be a brand new DLC chapter with a main quest and a home event, another playable hero, new enemies, and a new boss.

Also announced, the Children of Morta soundtrack is now available to listen to on YouTube, Spotify, and iTunes.

Video games are cool. Don't let anybody tell you any different.
MORE LIKE THIS
11 Bit StudiosChildren of MortaDead Mage