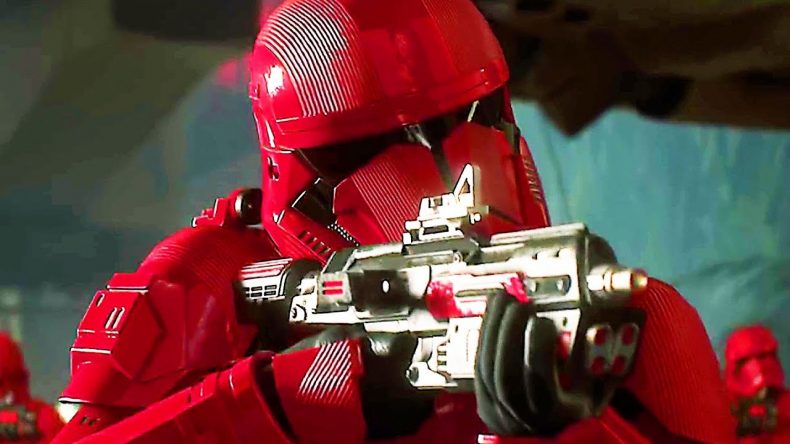 With the impending release of the final part of the Star Wars Saga, The Rise of Skywalker, new content based on the film is coming to Star Wars Battlefront II. New locations, reinforcements, heroes, and more is available today.

If you’ve seen the trailer, there’s a brand new jungle planet in it, and you’ll be able to visit in Co-Op playing as either the Resistance or First Order. It’ll also be available in Heroes vs Villains, but you’ll have to wait until December 20 to visit this new world. However, joining the Co-Op rotation from today will be Takodana, Jakku, and Starkiller Base, with all mentioned planets featuring both attack and defend scenarios.

There will be four additional sequel era reinforcements deploying on the battlefront. The Infiltrator class Sith trooper adorned in striking red armour, and the First Order Jet Trooper are coming, but so are two new alien species straight from Rise of Skywalker.

Finally, new hero appearances for Finn, Rey, and Kylo Ren will be available, inspired by the versions seen in Rise of Skywalker. They’ll be included in the Star Wars Battlefront II: Celebration Edition, or you can purchase them separately with Credits or Crystals. This edition, which came out on December 5, will include all Rise of Skywalker content.

-More than 25 Hero Appearances – Including six Legendary Appearances, plus one Appearance each for Rey, Finn, and Kylo Ren inspired by Star Wars: The Rise of Skywalker, coming December 17th

-More than 125 Trooper and Reinforcement Appearances

-More than 100 Hero and Trooper Emotes and Voice Lines

To celebrate the new Rise of Skywalker content, EA released a trailer which you can watch below:

Video games are cool. Don't let anybody tell you any different.
MORE LIKE THIS
EAstar wars battlefront II