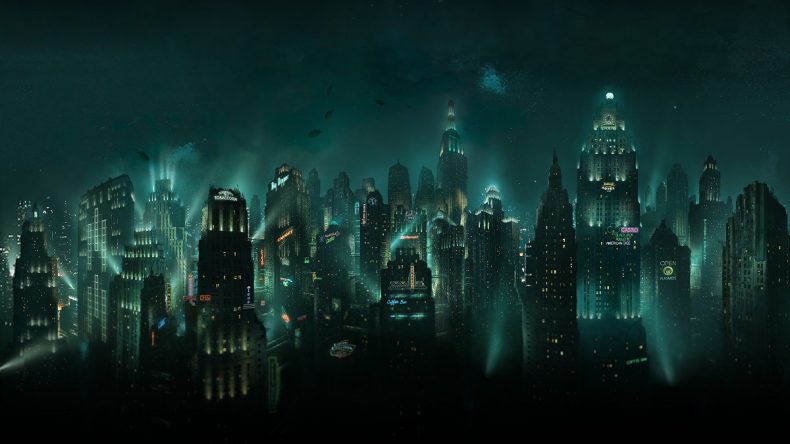 Few games are as beautiful as Bioshock. From the moment you step foot in Rapture, the grandeur of the city overwhelms you. The beautiful art deco, neon signs, and oceanic colour palette leaves you in awe. If it wasn’t for ADAM destroying this utopia for the social elite, you’d quite happily live there. Even though you encounter countless Splicers and psychopaths hellbent on ripping your throat out, it’s a remarkable place, and to celebrate The Bioshock Collection releasing on Nintendo Switch this week, we’ve decided to highlight some of our favourite locations.

From the original to Bioshock Infinite, we’ve picked the most breathtaking places you can visit. We won’t ruin anything for you, because if you are picking it up for the first time, we want you to experience these amazing games without having anything ruined for you. However, if you’re a veteran to the world of 2K Games’ masterpieces, allow us to take you down memory lane. Your first journey in the bathysphere allows you to see Rapture in its entirety. Even before you step foot in Rapture, you’re given a breathtaking view of many locations within the game, although you won’t know it at that point. As you arrive (and after witnessing your first Splicer), the stunning architecture is presented in all its glory. The lounge is one of your first port of calls – a place where people could relax before their journey or upon their arrival. The Welcome Center’s main role was to introduce people to the hospitality of Rapture, providing fine dining at Kashmir Restaurant, and entertainment at Footlight Theater. The lush forests and plant life within Arcadia provided oxygen to the entire city. Its colour and vibrancy is filled with myriad of flora that provides the only natural location in Rapture. It helped to give citizens a chance to escape the hustle and bustle of the Welcome Center and Farmer’s Market to have a picnic, take a walk, or sit on a bench and enjoy the scenery. The Waterfall Grotto and Tea Garden were just two of the standout spots for lovers and families to enjoy the serenity. Julie Langford was one of the main scientists behind its creation, using ADAM to help improve Arcadia, but like most things, Andrew Ryan began to charge people for the privilege to enjoy the benefits of Rapture’s natural haven. Luxury oozes out of every corner of Fort Frolic. Filled with casinos, shops, bars, and restaurants, it is a place for those with money to spend in abundance and unwind with a cocktail or two. It provided a juxtaposition between glamorous and seedy, allowing every kind of person to submit to their vices. Whether you wanted to admire the fine arts or a good steak, or satisfy your lust in a strip club, Fort Frolic was the place to be. Sander Cohen was the man behind its success, but when civil unrest broke out, he took matters into his own hands with dire consequences. Poseidon Plaza, the Southern Mall, and Eve’s Garden were just some of the most popular hangouts, unfortunately, they’re only a shell of what they used to be when Rapture was yet to be corrupted by ADAM. The story behind Ryan Amusements is as sinister as it gets. On the surface, it was an amusement park built for the children of Rapture, whether they immigrated or were born there. Aware that once older, these children may wish to see what existed outside of the city, destroying the secrecy of Rapture. In an attempt to quell their curiosity, Andrew Ryan hired various people to build an amusement park that would deter the children from leaving and teaching them about the fundamentals of Ryan’s beliefs. An animatronic engineer Carson Fiddle, Sander Cohen, and psychiatrist Dr. Sofia Lamb were responsible for the park, The El Dorado Lounge and Rapture Memorial Museum are a couple of the main attractions, but it is the Journey to the Surface ride that helped to make Ryan Amusements such a hit, despite its malevolent connotations. Once a home to Rapture’s architects, this high-class area became sought after living quarters. It was a home to the architects responsible for Rapture, with many of the buildings showcasing their work, but as time went on and after the economical collapse, it became a very different place. Unable to afford their rent, many resorted to prostitution. With that, Siren Alley became a red light district, filling with bars, casinos, and brothels instead of the upper class shopping district and elegant homes it was once known for. The Pearl was once a fancy hotel, but since everything went south, it became the Pink Pearl, a hub for prostitutes and pimps to make their money. Whilst not in the original game, Minerva’s Den was part of Bioshock 2’s DLC. It was the technological center of Rapture, and home to many companies such as the Rapture Central Computing executive wing, Air-Tite Archives, and McClendon Robotics. Rapture’s mainframe computer known as The Thinker was based deep within Minerva’s Den and controlled much of the city’s automated processes. It showcased much of the work Rapture’s greatest minds were capable of, and despite it not being a part of the main story, it was an excellent piece of DLC, thanks in part to the design of the Den. Bioshock and Bioshock 2 featured an underwater haven known as Rapture. It broke boundaries in level design, and to this day features some of the best level design of all time. Columbia was a different kind of city, but it was just as breathtaking, featuring a city built high among the clouds instead of deep under water. The Town Center is filled with beautiful architecture, such as New Eden Square and The Fairgrounds. Reminiscent of the Old West, Columbia embodies America in every way, filled with plenty to do and locations to admire. It’s also where you find out what the Sky Hook is, a key piece of equipment you use throughout your journey in Bioshock Infinite. Battleship Bay features a sandy beach and clear simulated ocean, a quaint arcade and plenty of shops for the people of Columbia to enjoy. It’s similar to the seaside resorts you remember as a child, and is located at the foot of Monument Island. The arcade is home to the Motorised Patriot, and you’re free to watch episodes of Dimwit & Duke on the theater machines. It allowed residents of Columbia a chance to relax, thanks to the faux beach setting, providing entertainment thanks to the Dancing at Dusk attraction, boating and surfing opportunities, and so much more. Home to the wealthiest citizens of Colombia, Emporia was filled with the upper class, as well as the home of Zachary Hale Comstock, the creator of the city. Comstock House is visible before you even step foot in Emporia, highlighting how wealthy Comstock was, with the rest of the city featuring huge skyscrapers, stately houses, and the main source of transportation within Emporia, the Grand Central Depot. The rich were free to ride a gondola or hovercraft from Port Prosperity, as well as spending their money in the high end stores and restaurants downtown. Unfortunately, when you visit Emporia, it is nothing but a warzone, thanks to the Vox Populi.

Video games are cool. Don't let anybody tell you any different.
MORE LIKE THIS
2k gamesBioshockBioshock 2bioshock infinite