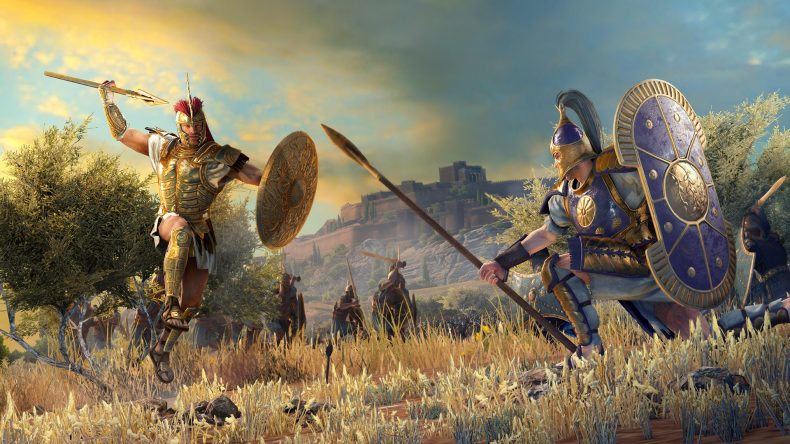 Arguably, the most enjoyable part of any game in the Total War series are the battles. Groups of troops are all lined up on the battlefield awaiting your command. You not only need to survey your surroundings to look for advantageous environments, but also react on a sword-edge to how the enemy is moving and respond accordingly to not get caught out. It requires you to be a great fighter and strategist all in one. And with Total War Saga: Troy, it’s clear things are being taken to a whole new level.

The Saga sub-series of Total War always focuses on a single conflict. For Total War Saga Troy, the lens is on the Trojan War, taking inspiration from Homer’s Iliad.It is Creative Assembly Sofia’s first stand-alone Total War title – having previously only worked on DLC for other titles – and it’s clear from the preview build of the combat, that they have a few new ideas of their own to faithfully recreate this historic period.

The first major change you’ll notice is in the mix of units on the battlefield. Given the early setting, infantry units were by far the majority of troops on the field, with cavalry rarer, and not necessarily used in battle at the time. Whilst there are a few mobilised units, most will be on foot, creating a slightly slower, more considered approach to the fighting. To account for this specific change, a lot more emphasis has been placed on the different types of infantry units. There are three weight types of infantry – light, medium and hard – and they all have much broader differences than different infantry classes in previous games. Lighter infantry move much quicker than their heavier counterparts but aren’t as strong in battle. Conversely much heavier units are slower, and can be easily flanked by more sprightly troops. However these heavy units can be deadly in close quarters and can take a beating before they fall too.

There’s new terrain too, which further adds to the strategy. Sand and mud will both slow down your troops as they move through it, but again depending on the type of infantry you are using, will depend on the penalty. Heavy units for example will really struggle to maneouvre in mud as they wade through it with their heavy armour on. Also there’s now also Long Grass which can actually hide your lighter units from view. It means you can use it to your advantage and ambush other units, or more easily position them for flanking or approaching from the rear.

Heroes of the Trojan War are well-known in the annals of history. Fighters such as Hector and Achilles were infamous of the time for their exploits, and are represented in Total War Saga: Troy. They are powerful units that can turn the tide of battle. They build Rage as they attack and this can be used on abilities to further enhance your infantry to help with flanking or damage for example. Their power makes them more akin to the Romance version of Generals in Total War: Three Kingdoms as powerful, almost invincible leaders based on their legendary status. And legends are a key factor in Total War Saga: Troy, with the Trojan War and the period surrounding it being steeped in myth. Aside from Heroes, there are also representations of mythical creatures, reimagined as troops. So for the first time you can bring a Minotaur or a host of Centaurs to fight alongside your regular troops. The Minotaur representation is a large, hulking masked warrior with incredible strength and durability. Centaurs on the other hand are horseback fighters, at one with their horses, symbolic of the mythical creatures themselves. It’s a nice touch that nods to the fantastical whilst keeping the concept grounded to the gritty strategic reality that Total War is famous for.

These new additions and refinements, make the combat feel quite different to other Total War titles, but certainly no less enjoyable. The pace initially seems slower, as the removal of many mobile cavalry units means the tide of battle is down to the trudging of infantry. However the pronounced nuances of each infantry type then really come into play once troops clash. If you just meet head on, light and medium infantry will likely be trounced by their heavier counterparts, meaning a more fluid, intelligent approach is required. Flanking and the use of tactical cover becomes key so you maximise the mobility benefit of lighter troops to gain strategic positioning on heavier, lumbering enemies.

It means that pressing an advantage is a lot more reactive than in other games. Simply gaining the upper hand initially with better troop placement and movement at the start of battle isn’t enough. To win consistently in Total War Saga: Troy you’ll equally need to be able to respond to changes on the battlefield and deal with emerging threats accordingly. Do you charge the enemy Minotaur straight away to weaken him and limit his damage early on, or do you flank him and chip away at him from afar with archers, saving your tougher troops from harm? And more crucially, what’s the back up plan if this doesn’t work?

Thankfully, once you’ve gotten to grips with its key principles, it’s easy to strategise in this fluid way. It may seem overwhelming at first, but a few battles in, you’ll understand the dynamic nature of the battles, and be coming up with new tactics on the fly. You’ll likely be slowing down battles to react to new threats, or trying a new tactic if your initial plan fails. But if anything, this increases the intensity of battles when they do play out as you’re much more in control and able to influence the outcome, making victory all the sweeter.

Battling was always a highlight of the Total War series and it’s clear with Total War Saga: Troy that a lot of care and attention has been given to its historical accuracy and a new level of nuance in its strategic execution. It has certainly whetted my appetite to see and play more of these legendary battles, and I look forward to doing so when the game launches later this year.