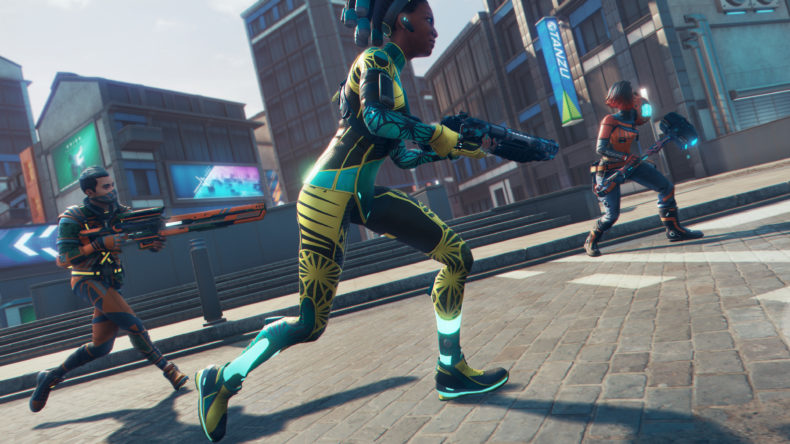 Ubisoft has announced that their FPS battle royale Hyper Scape is now available on PS4 and Xbox One. The launch also coincides with Hyper Scape’s Season One: “The First Principle”.

Set in the virtual city of Neo-Arcadia, Hyper Scape puts up to 100 players against each other to attempt to become the champion. There are also new gameplay mechanics to come along with this battle royale such as; Hacks, the Fusion, the Decay, the Showdown and more.

Ubisoft created this with content creators in mind and created the Crowncast extension with Twitch. This offers a unique way to watch and provides new tools for streamers to interact with their communities.

“We are tremendously proud of today’s launch across PC, PS4, and Xbox One. We’ve worked passionately for over two years to get to this milestone and we’re excited to say this is just the beginning,” said Graeme Jennings, Executive Producer on Hyper Scape. “With our fast-paced urban gameplay and one of a kind Crowncast Twitch extension, we’ve introduced a fresh new way to both play and interact with a Battle Royale.”

With Season One kicking off this also brings the start of Hyper Scape’s story. A mystery, created by Prisma Dimensions, has appeared that you will need to figure out. You will need to collect Memory Shards to discover more about the characters and events. Comics will also be released during Season One, and further Seasons, to build on the story.

Season One also introduces some new weapons for you to play with. The Dragonfly, a new mid-range weapon, and Magnet, a new hack , to use on unsuspecting players. Season One will include a total of 11 guns and 11 hacks.

Not only that but along with Solo and Squad Crown Rush domes additional limited time games modes. These new modes will be available throughout the duration of Season One.

As mentioned there are some new things for content creators in the Hyper Scape Crowncast Twitch extension; Kudos. This new tool allows viewers to produce in-game visual effects within a streamer’s match. The Kudos can be purchased with Twitch Bits.

Not only that but you can progress on the free and premium Battle Passes by watching Hyper Scape streams on Twitch. Streamers will also be able to invite viewers to join their squad in a few clicks.

The Vote on Events feature is also extended in Season One with a new event card called “Lethal Melee”. During this new event a player’s melee weapon can take out an opponent in one hit. With this new event card, this brings the total Event cards to nine through the

In addition to everything Twitch related above there are also new emotes to unlock. From 17-31 August, if you subscribe, gift a subscription or cheer with at least 300 bits you can unlock emotes that are yours to use permanently. These are also Hyper Scape inspired emotes.

And finally, Season One comes with new customisation items via the Battle Pass. The free and premium tracks feature up to 100 tiers full of cosmetics to unlock.

If the premium track is up your street then it’ll cost you 950 Bitcrowns, which is the in-game currency. Bitcrowns can be bought for real money or by playing the game.

Now that you’re all caught up with the goings on of Hyper Scape, sit back and enjoy the latest trailer that’s just below this.