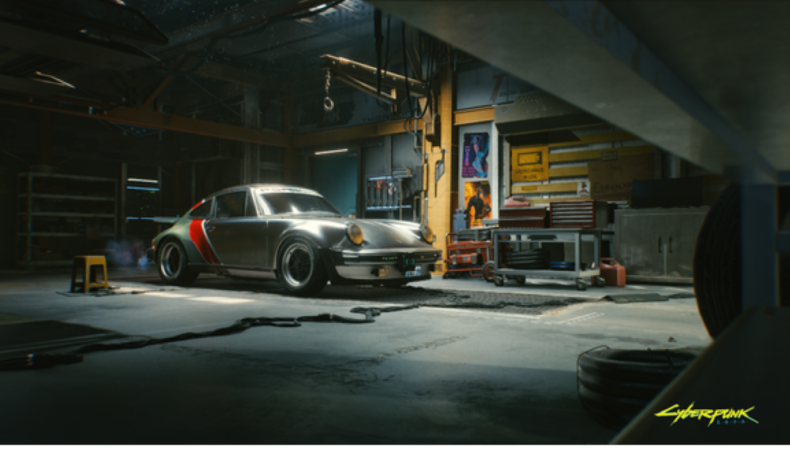 CD Projekt Red has announced today that the studio has recreated the classic Porsche 911 Turbo to be featured in its upcoming video game, Cyberpunk 2077. Eagle-eyed viewers may have noticed it during the latest Night City Wire episode for the game. It will be included in the game as a unique, fully-drivable vehicle. Its presence is tied to Johnny Silverhand, played and portrayed by Keanu Reeves.

The team at CD Projekt Red has used sketches, photographs, and photogrammetry to try and recreate this beloved 1977 automobile. But that’s not to say it hasn’t changed in the century leading up to the year of 2077. The model has been adapted through the addition of a lidar attached to the front, a set of sensors and elements to identify the vehicle from the air, and electronic mirrors with monitors inside the vehicle.

Paweł Mielniczuk, Art Director of Characters, Weapons and Vehicles, CD Projekt Red had this to say about this famous inclusion:

Johnny’s a legend of the Cyberpunk universe. When thinking about what kind of car he’d be driving through the streets of Night City, we knew it would have to be one just as legendary as he is. Having Johnny’s story in mind, and being huge fans of Porsche ourselves, the answer could only be the classic 911 Turbo.

To see the car in all it’s glory you can watch the Cyberpunk 2077 Porsche 911 Turbo Announcement trailer below:

Cyberpunk 2077 will release November 19, 2020, for PC, Xbox One, PlayStation 4, and Stadia. The game will also be playable on Xbox Series X and PlayStation 5 consoles when available.

At a later date, a free upgrade to Cyberpunk 2077, taking full advantage of next-gen hardware, will become available for owners of the Xbox One and PlayStation 4 versions respectively.