previous
Fall Guys is now Free for All
random
next
Conan Exiles update 3.0 is coming in Q3
0 comments 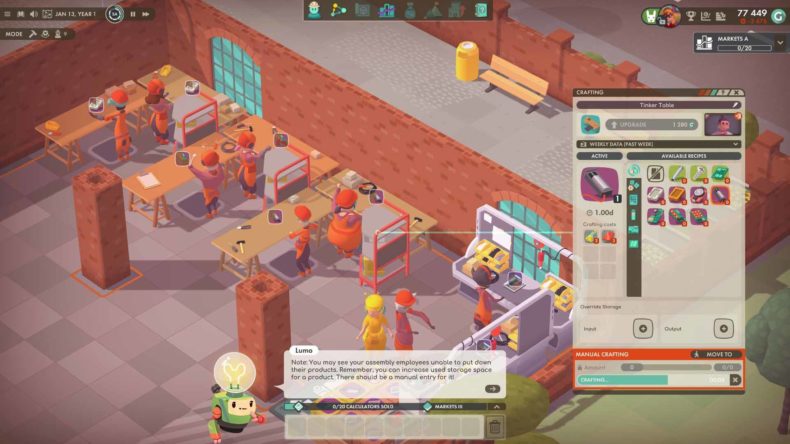 Remember back in May when we brought you the news that Good Company would be leaving early access and hitting version 1.0? Well, that date has finally come, and it’s today!

Developed by Chasing Carrots, version 1.0 is bringing plenty to the table, not least of which is (up to) 4 player co-op mode, a full campaign with two new missions, new products, module types, reworked levels, and a load of balance changes. You can see the launch trailer below.

Players will need to keep their business afloat in Good Company, but they’ll be able to achieve financial success however they choose. Do they run small and lean, focusing on dependable revenue over the long term? Or perhaps explosive growth is more appealing, expanding the operation whenever possible in an attempt to overwhelm the competition?

Regardless of the route they take, virtual executives will need to consider a host of factors including personnel and employee logistics, managing supply lines, and optimizing operations to become the best tech company in the county – or go broke trying.

The game already has a “mostly positive” rating on Steam, with nearly a thousand votes. As to why it was in early access, the developer said ““We believe that involving the community in the game development process is a crucial part of creating a good game. This is especially true in the management simulation genre. Player feedback in the early stages of development is the most important ingredient for finding the right game balance and pacing. The game has reached a stage in which the core mechanics are stable and the most important frameworks are finished. Now it’s about forming the best game experience together. The community is very important to us and we’re excited to see it grow through Early Access and beyond”.