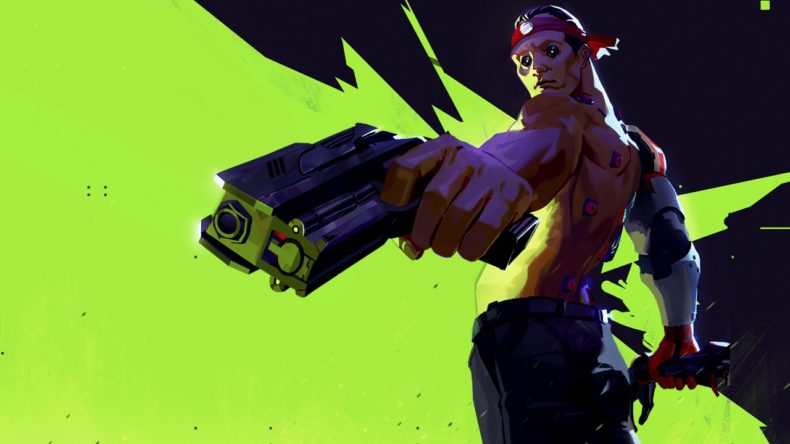 I love Cyberpunk as a genre. I love the aesthetic, the associated music, the idea of a future world as equally brightened by ideas and innovation as it is darkened by corporate greed and shady science. I adore the neon jungle look of a towering megalopolis, and bizarre technology that might one day, maybe, become achievable. After the recent success (ish) of Cyberpunk 2077, the setting has seen a massive boost in popularity, with titles like Ghostrunner and Severed Steel rising to the fore. Deadlink, from Gruby Entertainment, was cast in a similar mould – a fast-paced, neon-drenched FPS with a cracking soundtrack and thrilling action.

In Deadlink you play as a nameless agent volunteered for the Deadlink Project, an experimental initiative that allows you to remotely pilot a synthetic combat Shell via a neural link. Think of the Stacks and Sleeves in Altered Carbon. This allows you to be sent out on highly dangerous missions to take down corrupt corporations and the private armies of immoral billionaires with relatively minimal risk. 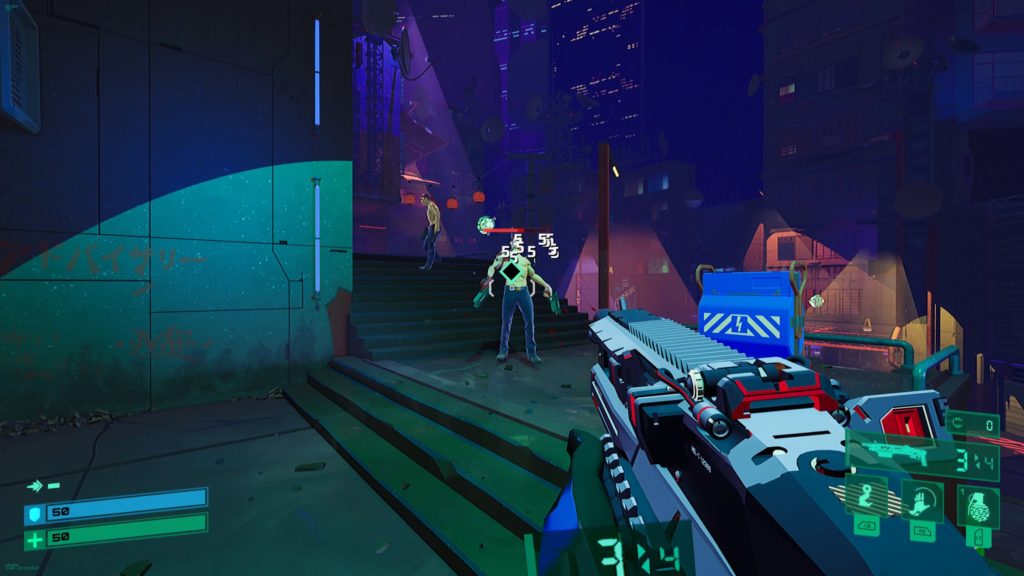 It also allows Deadlink to be a roguelite, as death is never the end. As with most games of this nature, repetition is baked right in, but tempered by the smooth, addictive nature of the combat. You’ll unlock new weapons and abilities, and steadily become stronger during each run as your enemies get faster, deadlier, and more numerous.

It’s smooth and reactive, brutal and immediate. Like Ghostrunner, the action is set in closed arenas separated by short sections of traversal. While there’s nothing like Ghostrunner’s incredible parkour, the combat itself is very reminiscent of Slipgate Ironworks’ title. The onus is on staying mobile and aggressive, using a hookshot to catapult yourself around the combat area, hurling grenades and scoring hyperviolent kills.

You regenerate health by killing “marked” opponents, and you can mark them in various ways. Catching them in a grenade’s blast radius or hitting them with your Scrambler gauntlet will do the trick, which encourages you to mix up your offensives and keep moving. Initially you’ll have a Soldier Shell and a shotgun / rocket launcher combo, but there are other Shells and weapons to unlock. These are permanent, though upgrades earned during a run are not. 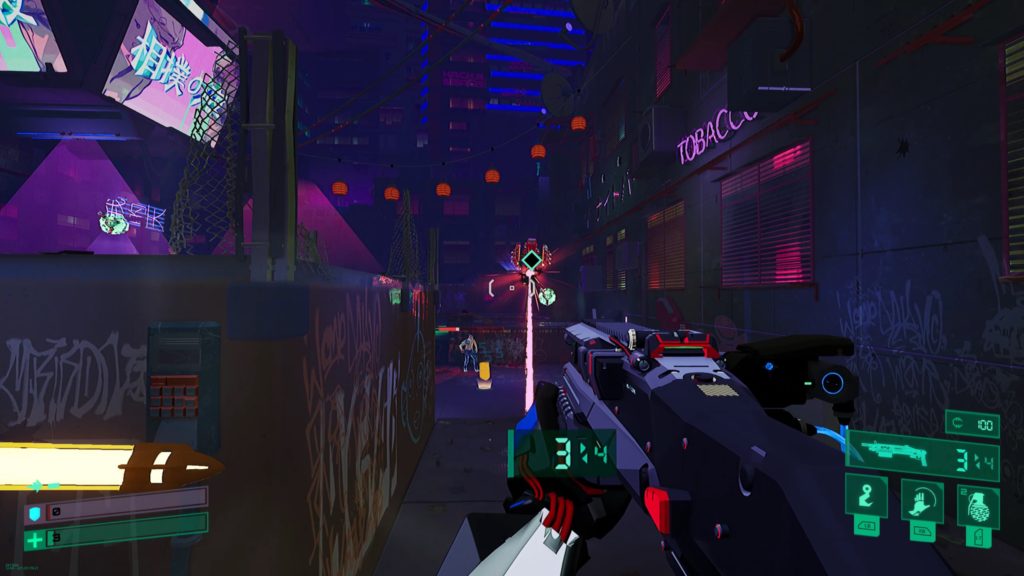 Each arena has multiple exits that open when everything is dead. Some offer credits or tokens for permanent upgrades, some offer Shell modifiers or personal buffs. These slot into your Shell’s utilities and require a certain amount of energy to activate. This creates an interesting dynamic whereby the buffs are triggered by using the associated utility. For example, you might attach a fire damage mod to your grapple, which will cause the next shot after you use the grapple to set an enemy aflame. Other buffs include health regeneration or skill cooldown modifiers, creating a huge number of possible combinations.

So far, Deadlink doesn’t have the most diverse missions. Being in early access, we can expect to see more Shells, locations, weapons, and abilities added over time. It’s a nice-looking game, although not the most technically fluid. Here and there I experienced some nasty slowdown and stutter, whether on PC or Steam Deck. It’s a great fit for the latter though, the immediacy of the Roguelite gameplay making for a superb time-killer on the handheld. 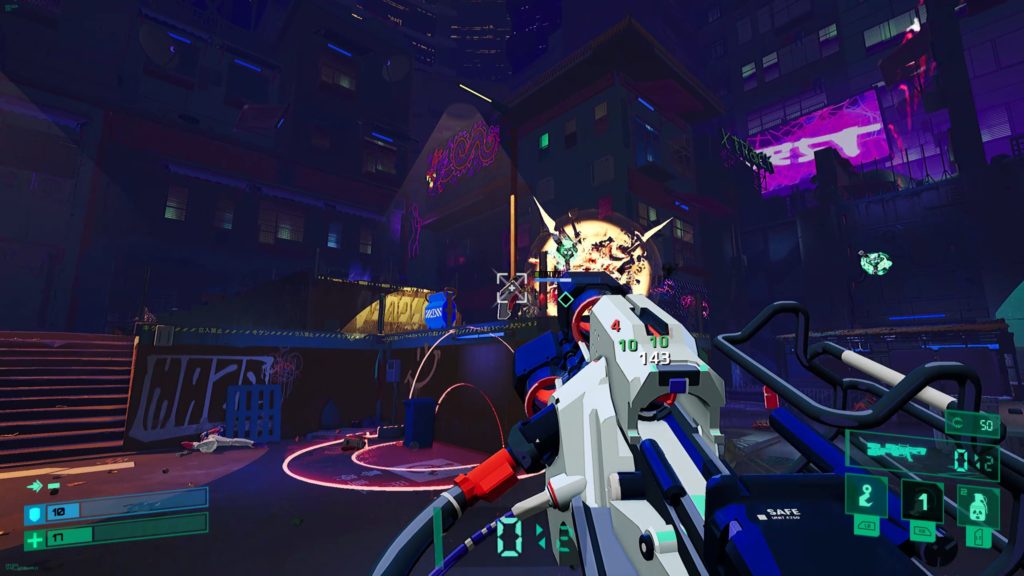 It also has something of a story, as you’re observed by Project Director Thomas Crusher and cyber upgrade specialist Rumiko Usagi. Even when you fail runs, the story advances, with new expositional dialogue and more insights into the corporate-controlled dystopia of Deadlink’s future.

With a killer soundtrack, fast and fluid FPS action, and a gorgeous world of neon-lit violence, Deadlink has an incredible amount of potential. Fans of frenetic blasting and Cyberpunk media in particular shouldn’t hesitate to try this one. Deadlink is definitely one to watch as we get closer to the full release.

Deadlink is out now in Steam Early Access on PC.

Senior Content Editor Mick has been playing games for over 30 years and writing about them for around 12. After drifting from site to site for a while, settling briefly at the now-defunct Made2Game and freelancing for the gone-but-not-forgotten NintendoGamer Magazine, he came at last to rest at Godisageek. Mick has been a reviewer, staff writer and content editor here for some time, while also moonlighting a little for Red Bull Games. He has 4 kids, has written 2 novels, and sometimes even manages to pay a bill or two. You'll usually find him defending the galaxy in Destiny 2, battling evil in Diablo 3, or lurking in the background on Twitter. Find him there @Jedi_Beats_Tank, or on XBL (JediWaster247), PSN (Jedi_Waster) or Nintendo (JediWaster).
MORE LIKE THIS
CyberpunkFPS