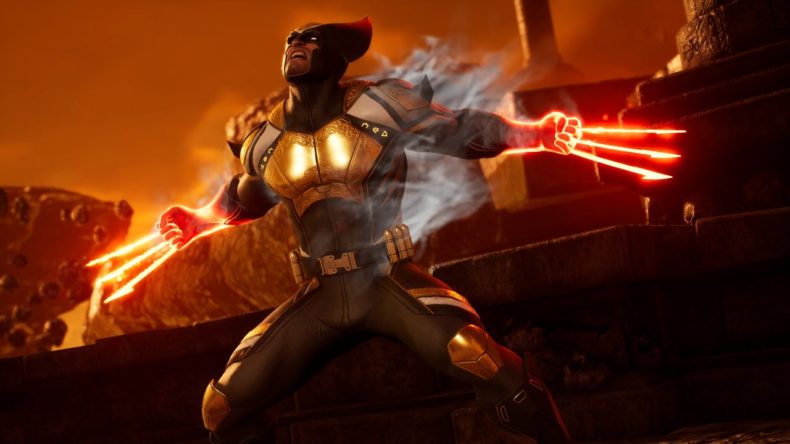 There’s a great line-up of heroes in Marvel’s Midnight Suns, but if you want everyone to reach their full potential, you’ll need to get real pally with them. Even characters that are notoriously distant, such as Wolverine, will warm up to the Hunter with enough fishing trips and gifts of chocolate. When they hit level 5 Friendship, you’ll unlock their Legendary Hero Challenge. These are structured puzzles that utilise each hero’s unique strengths. They’re all tough, and the Midnight Suns Wolverine Challenge is no exception.

The reward is a black and gold super-suit and the Midnight Special ability, which is absolutely devastating with full Heroism. But how do you get it? Read on, and we’ll tell you. 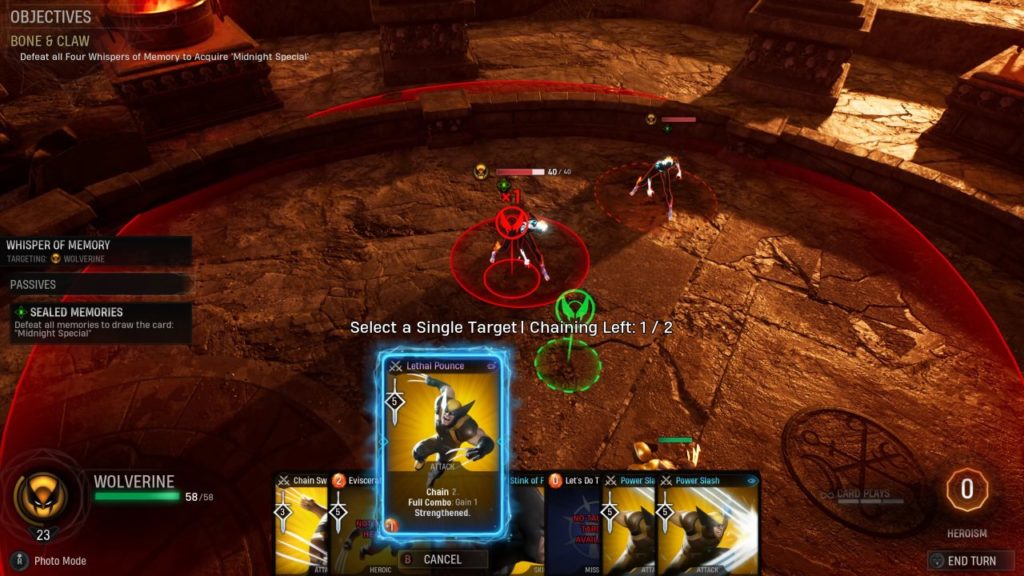 Logan’s challenge focuses on bringing the fight to him. You have no moves or redraws, but you’ll begin with a selection of offensive cards. You have Lethal Pounce, Stink of Fear, two Powerful Slash, Chain Swipes, and Eviscerate. There’s also Let’s Do This mission card, which is the giveaway. Let’s Do This triggers all the taunted enemies in the arena – even those not within reach – to instantly attack regardless of turn.

You have two enemies in front, and two behind, so starting with the front left and moving clockwise we’ll label them 1, 2, 3, and 4. 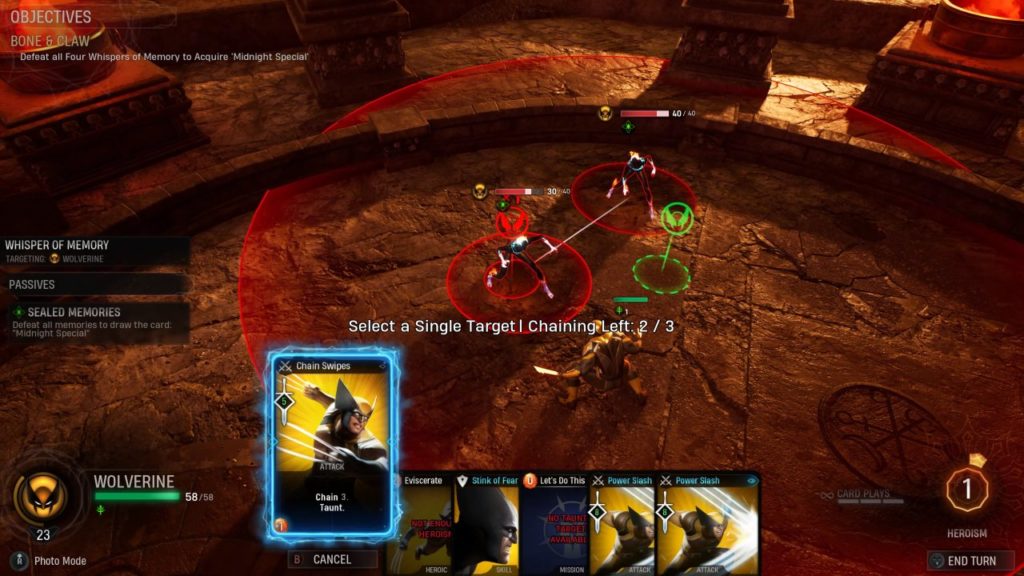 Use Lethal Pounce on 1. Although you can chain it, don’t. Use both attacks on one. The onus is on softening them up for the kill. Lethal Pounce will also grant Strengthened to Wolverine, increasing his damage output. Now use Chain Swipe, but stack two attacks on 2 and the remaining attack on 1. This will taunt both of them. 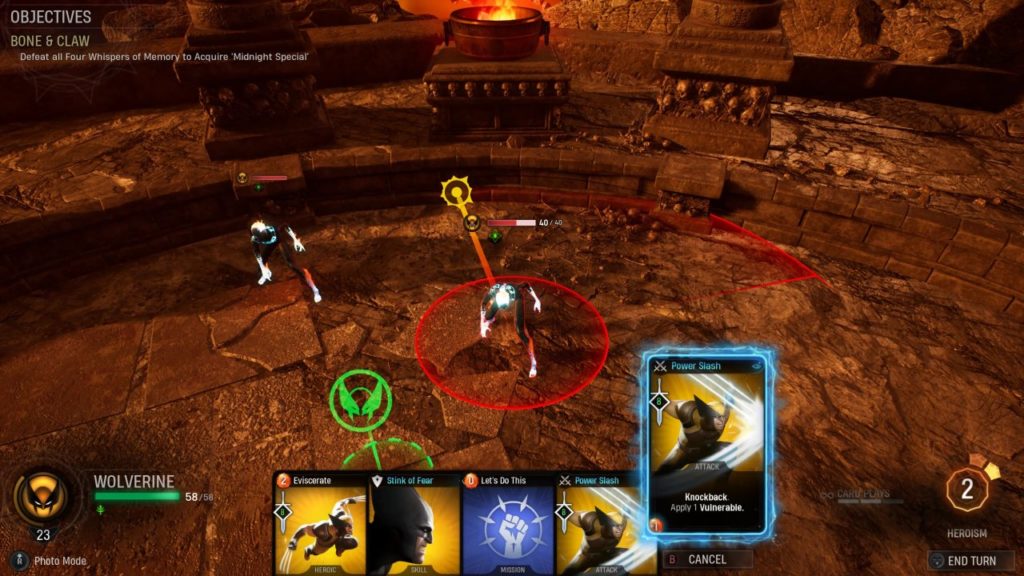 Now use the first Powerful Slash on 4, and the second Powerful Slash on 3. You should now be standing between them and they’ll both be Vulnerable, so use Stink of Fear to Taunt both and apply Counter to Wolverine. 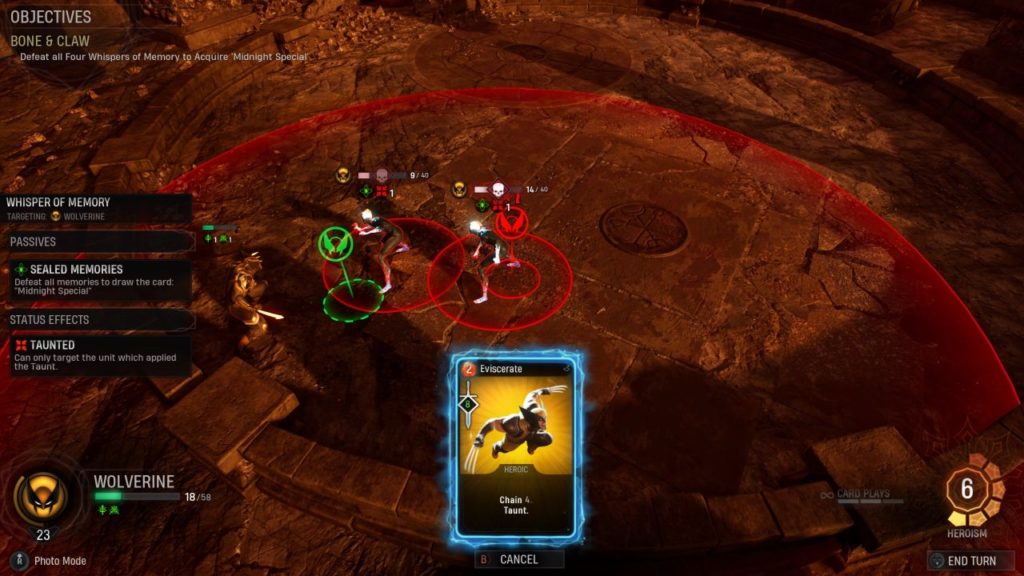 At this point all the enemies will be damaged, all will be Taunted, and two will have Vulnerable. Coupled with Wolverine’s Strengthened status, it will allow Let’s Do This to kill 3 and 4. Trigger it, let them attack, and Wolverine will Counter all four attacks, killing 3 and 4. Now simply stack two chains of Eviscerate each on 1 and 2, and you’ll receive the Midnight Special card. Use it on the crystal to complete the Challenge. See the video below for a clear demonstration of what to do.

We hope this guide helped you out with the Midnight Suns Wolverine Challenge. If it did, why not check out the others, as well as the review on Godisageek.com.

Senior Content Editor Mick has been playing games for over 30 years and writing about them for around 12. After drifting from site to site for a while, settling briefly at the now-defunct Made2Game and freelancing for the gone-but-not-forgotten NintendoGamer Magazine, he came at last to rest at Godisageek. Mick has been a reviewer, staff writer and content editor here for some time, while also moonlighting a little for Red Bull Games. He has 4 kids, has written 2 novels, and sometimes even manages to pay a bill or two. You'll usually find him defending the galaxy in Destiny 2, battling evil in Diablo 3, or lurking in the background on Twitter. Find him there @Jedi_Beats_Tank, or on XBL (JediWaster247), PSN (Jedi_Waster) or Nintendo (JediWaster).
MORE LIKE THIS
GuidesHintsmarvelMarvel's Midnight Suns. Guide