previous
Voodolls will be getting a closed beta ahead of April launch
random
next
Backbone is getting a prequel next month, demo available now
0 comments 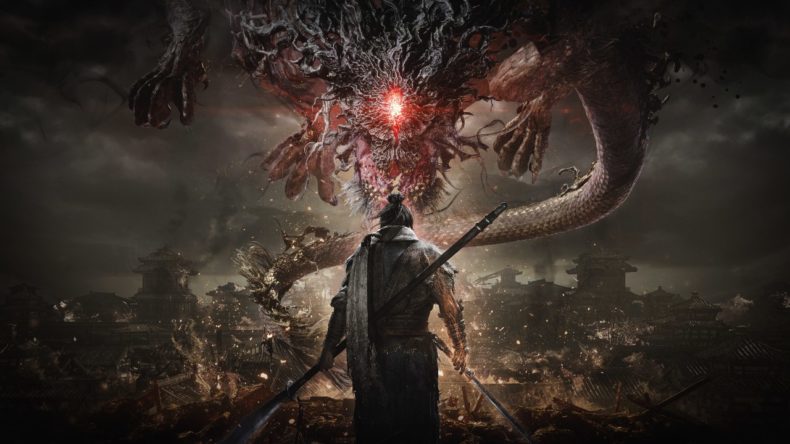 The first thing I thought when I stepped into the Wo Long: Fallen Dynasty preview build was “Oh, so this is Nioh 3 then. Gotcha.” I mean all the parts are present: Far East setting, army of demons sweeping the land, plucky hero leaping from place to place on the map, killing and looting minor beasties until the boss rocks up.

It’s not like Team Ninja are trying to avoid it, either. The differences between this and Nioh 2 are about as stark as the difference between, say, Dark Souls 2 and Dark Souls 3 (though not necessarily in terms of quality, before you twist my words). They’ve moved the setting from Japan to China, circa the Three Kingdoms Era, and Onmyo is called Wizardry. And that’s more or less it on the surface. 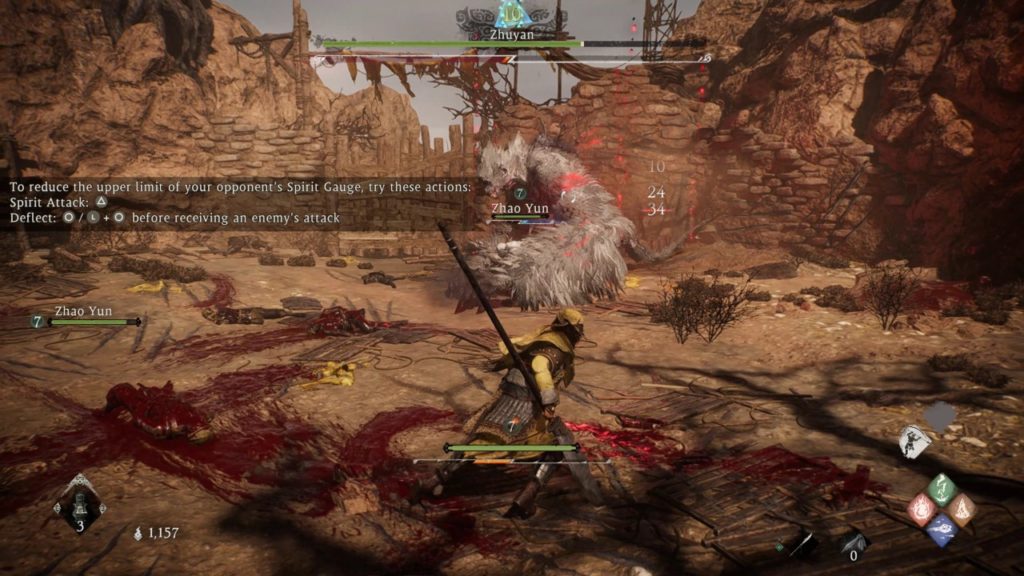 But Wo Long also borrows ideas from Sekiro. Notably, this is a game that requires you get more familiar with the block and parry button than you currently are with the contours of your own Chevy Chase. You might as well learn to love the parry button, because without it you simply can’t succeed. Well, I mean, normal people can’t. I’m sure some crazed challenge hound will try a no-parry run on a Rock Band guitar at some point and prove me wrong.

The new preview build features different areas and a few different bosses to the recent public demo. It begins with what I assume will be the start of the game, as your nameless militia soldier is speared through the belly button and then resurrected by a magical jade amulet. And yes, you guessed it, the amulet brings you back whenever you either die or use its power to grow stronger, but it also inexplicably respawns the local bastards as well.

Parrying is absolutely integral. Any normal attack can be blocked without penalty, but if an enemy glows red you’ll also need to move in the direction of the incoming attack to perform a critical parry. It’s all about balancing your Spirit, you see, the catch-all resource that acts as stamina, mana, and poise all in one. There are no stances to awkwardly switch between, but you must always be aware of your Spirit and the enemy’s. 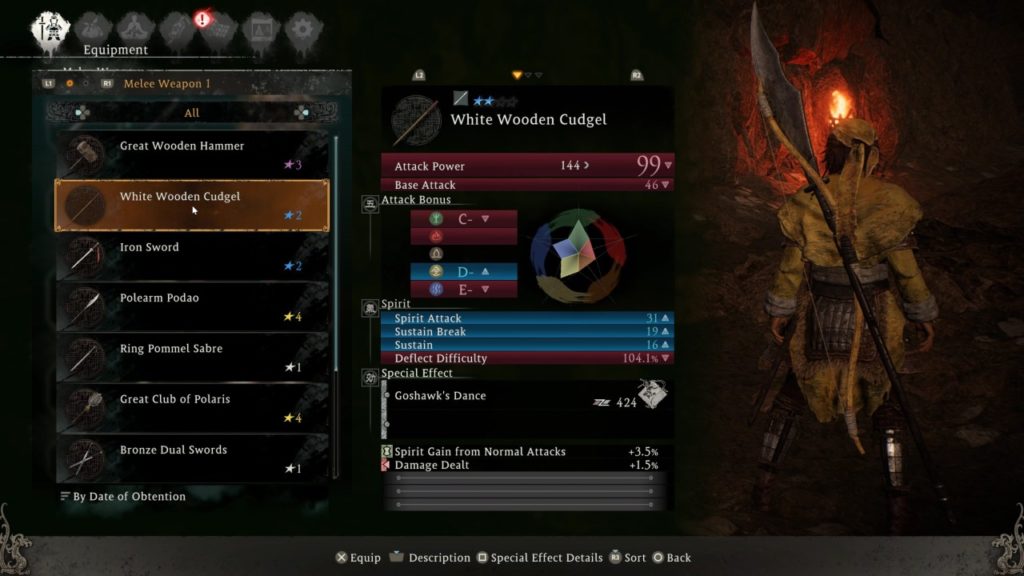 When it’s blue, you’re in a positive state and will do more damage to the enemy’s gauge when you block or parry, and you’ll be able to cast spells and use abilities faster. When it’s in the red, the opposite is true. Attacking and parrying fill the blue, while blocking or casting fills the red, and when you’re doing neither it returns itself to neutral. It’s a fantastically dynamic system that’s deceptively simple, but utterly essential to your success.

Bosses, for example, will soak up your attacks until you fill their red spirit gauge, at which point they’ll be open to a Fatal Strike which deals massive damage. Of course, this being a Team Ninja soulslike, you’ll slowly build a huge arsenal of melee weapons, bows, throwing knives, bombs, spells, special abilities, martial arts moves and Spirit animal summons. While there are limited options in the preview, we nevertheless got a glimpse at just how many tools there will be. Build diversity is going to be high, as it is in Nioh 2, and we can’t wait for that.

The second stage in the preview sees you making your way through a body-filled battlefield alongside Zhao-Yun, a friendly officer looking for his missing scouts. You’ll face a lot of Wo Long with allies by your side, who can take the focus of the bosses at times, or offer advice and backstory for the things you’re seeing. There’s also summoning-based coop multiplayer, of course, though we couldn’t sample that in the preview. We did get a glimpse at the Vengeance system, whereby if you kill an enemy who killed another player in their world, you’ll receive a reward. 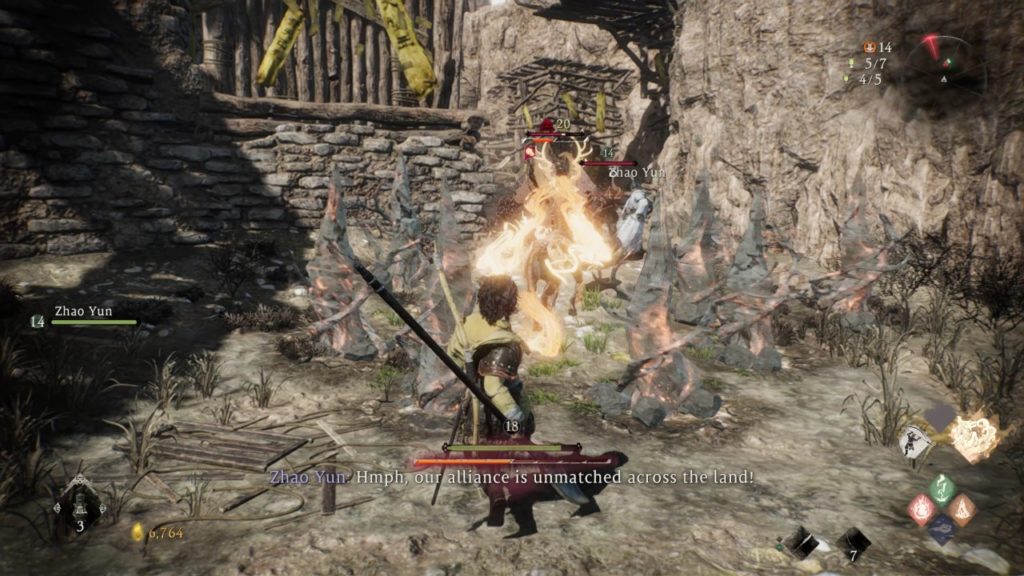 Life and death is tied to Morale. While you find Battle Flags to save, level up, adjust your spells and resupply, smaller flags boost your morale rating and lock the minimum level. Essentially, when you die you’ll lose half your Qi (souls, blood echoes, etc) and a point of morality. This makes enemies in the area tougher until you restore the balance, meaning death will punish you – but not too harshly.

As you level up you’ll increase one of five attributes based on Earth, Water, Fire, Wood, and Metal, which increase specific stats and determine which Wizardry spells become available. You can have four spells equipped at any time, alongside ranged weapons, two melee weapons, and unlockable martial arts that are tied to the currently equipped weapon.

The mind boggles at the potential builds that will come with the full release. The preview is very limited, but certainly offers a taste of the difficulty level and the scope of the world. The enemy design is fairly rote until you reach a boss or miniboss, which take the form of colossal mutated abominations that will challenge you thoroughly.

Even based on the two stages in the preview build, there’s no doubt in my mind that Team Ninja are about to drop another fantastic Action RPG. It will be a hardcore challenge for sure, but there’s potential for Wo Long: Fallen Dynasty to match or even surpass Nioh 2, and from me that’s high praise indeed. It’s early days yet, of course, but unless the devs start to drop some serious balls, there’s every chance Wo Long will be another solid offering.

Wo Long: Fallen Dynasty is due for release on PlayStation, Xbox, and PC on March 3, 2023.

Senior Content Editor Mick has been playing games for over 30 years and writing about them for around 12. After drifting from site to site for a while, settling briefly at the now-defunct Made2Game and freelancing for the gone-but-not-forgotten NintendoGamer Magazine, he came at last to rest at Godisageek. Mick has been a reviewer, staff writer and content editor here for some time, while also moonlighting a little for Red Bull Games. He has 4 kids, has written 2 novels, and sometimes even manages to pay a bill or two. You'll usually find him defending the galaxy in Destiny 2, battling evil in Diablo 3, or lurking in the background on Twitter. Find him there @Jedi_Beats_Tank, or on XBL (JediWaster247), PSN (Jedi_Waster) or Nintendo (JediWaster).
MORE LIKE THIS
Action RPGKoei TecmoniohSoulslike