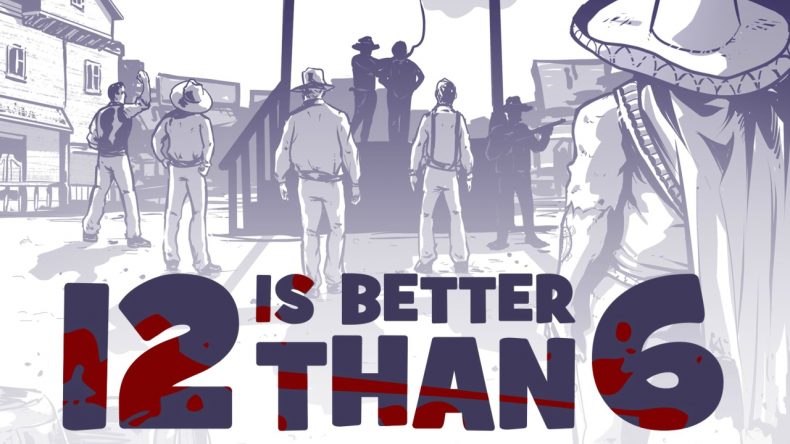 12 Is Better Than 6 is a top-down action game in a similar vein to Hotline Miami, but with a Western flair. It boasts a gorgeous pen and paper visual style in monochromatic tones contrasted with a shocking splash of red whenever you die or kill one of the various enemies that patrol each level. Brutally difficult in places, it puts you in short, puzzle like environments that have you trying to get from start to finish by either employing stealth or going in guns blazing. Death is frequent and often frustrating, but underlining that is a definite “just one more go” feeling that helps pull you through some uneven difficulty spikes and a camera that doesn’t seem to want to work with you at all.

You begin in a slave mine, a Mexican of dubious past and no recollection of who you are or why you are there. It seems you do have a knack for killing though, and you are quickly set on that path, blasting your way through droves of bandits, military men, native Americans, men who look at you funny, couple of rats that crossed your path, a horse or two…maybe. To be honest I lost track of what I was doing and why as the rhythm of inching my way through each level took over. I struggle to decide whether 12 Is Better Than 6 is a very good game or not; all I know is that with each death I often burst out laughing and tried again. You have a few tools at your disposal: knives, pistols, rifles, dynamite and even a bow in later levels. Stealth is an option, with a limited amount of routes through a level where you can bypass or sneak up on most enemies, knifing them in the back and stealing their weapon. In the tutorial section you are taught that you can smash through windows to provide you a viable alternative route to that which is clearly laid out. Mercifully it seems that your enemies are hard of hearing (perhaps too much “yee hawing” and firing their guns into the air has done some irreparable damage to their eardrums?), however they do not suffer with poor eyesight, and are able to spot you at the slightest error in moving out of cover.

Stealth was more often than not my preferred option through the levels as the timing required to take on the waves of enemies suddenly alerted to your progress was slightly past my ageing capabilities. That being said, there were plenty of times when the red mist would descend and I would just throw caution to the wind and chuck a stick of dynamite into a group of enemies huddled around a camp fire as I needed to get past them to progress. At times like this I would then spend a few moments of intense, heart-in-throat action trying to outwit the surviving enemies before they got me. The controls and difficulty are utterly unforgiving, and your lethally accurate foes can, and will, one-shot you. If you do find yourself in a position where it’s all guns blazing, it is entirely possible to funnel your enemies into a charnel house of your choosing, perhaps chucking a stick of dynamite behind you to thin the crowd, but be aware that in such situations you will need excellent timing management as after each shot your gun needs to be cocked and loaded again – a rhythmic blend of first clicking ZL and then ZR. By far your biggest enemy in 12 Is Better Than 6 is the camera that constantly restricts your field of view. Whereas in Hotline Miami you could equip an animal mask that extended your visible range, there is no such ability here. A large portion of each level is entirely invisible until you move within the range of your character’s vision, which means you will almost certainly be killed by an enemy whose path you did not see until it was too late, especially in later levels. Understandably the core element of 12 Is Better Than 6 is that you are supposed to die, and with each death you begin to learn the routes and pathways throughout the level, however having your vision obstructed in this way does make for a frustrating, staccato feeling of progress, particularly when you have fought through a horde of enemies, the end is in sight and you get blind-sided by the one left standing because he was ever so slightly outside of your visible range.

I really enjoyed 12 Is Better Than 6. It is at times frantic, requiring excellent control and timing management, but the fact that you can approach it in a more stealthy way adds an element of puzzle solving that I really appreciated. The visual style is quite arresting as well, with the vivid slashes of red providing a stark reminder of just how ruthless and barbaric your character is. There is also something faintly comical about the deliberate top down style where each character is basically a moving hat with a gun poking out manoeuvring around a space. It demands pitch perfect timing that won’t appeal to everyone, but being able to play on the Switch in hand-held mode, means there is a very definite hook that fools you into thinking that next time, maybe next time, you’ll remember that fella who comes out of the outhouse that you can stab in the back, before moving on to the chap sleeping soundly by the campfire – so actually go on then, grab a cup of tea and have another go.

12 is better than 6 is a frantic, top-down shooter with a lovely pen and paper visual style