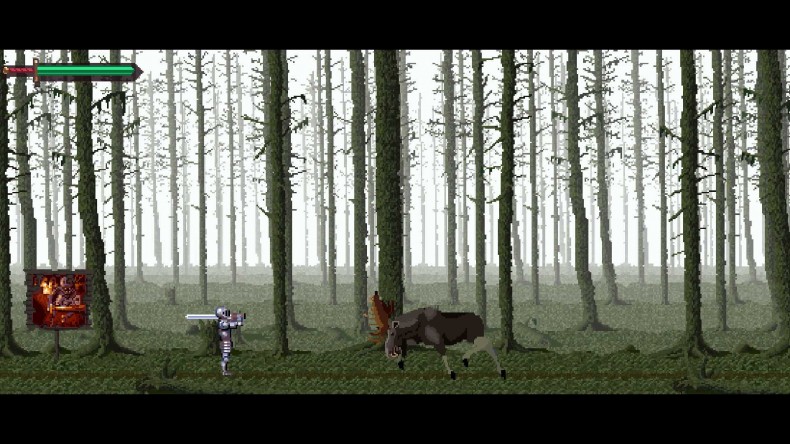 It’s an 8-bit side-scrolling fighting game that sees your nameless Knight strolling through the countryside killing people who run at him. There doesn’t appear to be much rhyme or reason as you carve through farmers, soldiers, other knights and cows in your daring quest to go from the left side of the screen to the right. There’s not really much to A Bastard’s Tale if I’m honest. Initially it’s incredibly frustrating, as actually dodging correctly or timing your swings is bloody hard, and reading your opponent is tricky given the simplistic graphics. After every one you vanquish, you move on to the next and repeat. Sometimes other obstacles like charging cows and rolling barrels are sent your way, but you just hit them to continue.

Blocking is a combination of pushing the direction and a corresponding button, which is the way it is purely to engineer challenge. There’s no reason block couldn’t be a single button press based on timing. Enemies have varying weapons, speeds and reaches, so it’s easy to walk into a hit box and take a sicker punch. Two or three hits is all it takes to send you back to the start of whichever of the five levels you’re on. If it wasn’t for the difficulty, A Bastard’s Tale would last less than an hour. That’s fine in itself, but it shows just how many times you’ll die and restart that I’ve spent several times that trying to succeed. Luckily, it’s nostalgia-heavy. The simple aesthetic, chiptuney music and challenging core design take me right back to my Commodore 64 days, abs that alone earns it a thumbs up.

This is an easy game to recommend to a certain type of gamer, one who hackers for retro stylings and borderline-unfair difficulty, but those who like a modern touch, it’s unlikely to satisfy.

This is an easy game to recommend to a certain type of gamer, one who hackers for retro stylings and borderline-unfair difficulty, but those who like a modern touch, it's unlikely to satisfy.