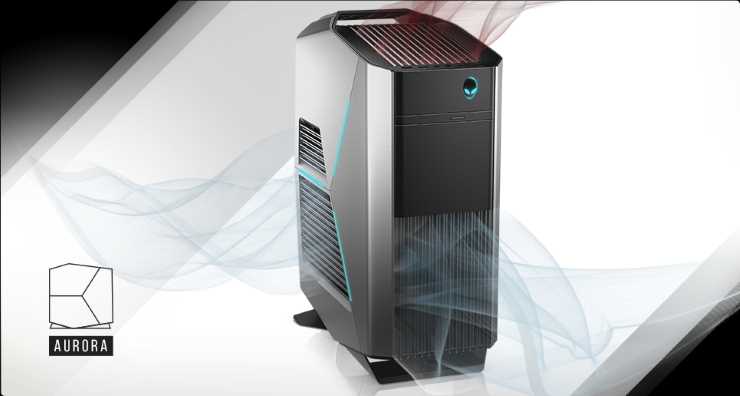 I don’t like to start reviews with hyperbole, really. But it’s hard not to be exited, here, because after setting up the Aurora and pressing the on button, I turned away to start picking up the boxes and packaging it came in, and then I realised it was already on. In seconds. I’m not saying I’m used to it taking ages, because my gaming PC is a beast itself, but the Aurora has made it feel aged in a way I wasn’t quite ready for.

Look, of course part of that is that the Aurora is a new, freshly unboxed gaming desktop, and it doesn’t have the years of programs and data that are slowing my self-built PC down, but the combination of seeing a higher resolution that I’m used to, mixed with the rapid bootup was just, well… it depressed me, because now I need a new GPU sooner than I thought I would. Perhaps more telling, I would have always recommended to people that if you’re buying a new PC, you should build your own. Now, though, I’m not so sure, because while the top end model we’re using starts at the hefty price tag of £1789, it is about as future proof and well made as you could possibly have, and to build your own model to this spec wouldn’t be much cheaper anyway. Aesthetically, it’s very much an Alienware build. Greys and blacks make up the tower, and there’s plenty of USB ports and space to expand should you ever need to. The glowing logo that we all know and love is present, as is the ability to program lighting zones to your own tastes, but in fairness, compared to Alienware’s laptops, the Aurora is fairly quiet and inoffensive to look at. It’s not subtle, being a mid-range (I’ve seen way bigger) tower, but it’s discreet enough to slot into most desk setups. Five USB 3 ports (2×3.1 and 3×3.0) mean that you’re VR ready right out of the box, and as you’d expect, the Aurora handles VR like everything else: with ease.

The i7-6700 overclocked to 4.3Ghz is part of the impressive package, as you’d imagine – this is a seriously high end processor, but throwing in 16GB of RAM (which I have on my PC) helps make everything so rapid. On top of that there’s a 1TB HDD (SATA) for data, but a 256GB SSD HDD for boot, and unless I’m mistaken, it’s the first time I’ve used a PC with an SSD. That, obviously, explains why it goes from off to on so damn quickly, and again, like with the GPU, if that’s what an SSD boot HDD can do, I’m converted, and every device that has a HDD should be an SSD. Wow.

But the star of the show is naturally also one of the most expensive components: the NVIDIA GeForce GTX 1080 Founders Edition. An 8GB GPU, then, and another first experience for me with that card. All I can say is, well, bloody hell, my 970 suddenly feels very old. To test it out, I decided to run a game I know can look good on lower end cards, but I’ve never seen running on the absolute ultra-settings: Rise of the Tomb Raider.

And, again, wow. It ran so smoothly it was just stunning to look at. Using the GeForce Experience I let it decide the best specs, and it was well over the 1080p resolution most are used to. Deciding it’d be a good idea to push the Aurora, I set everything to max – everything. So now we’re looking at a 4K resolution, and it can’t hit 60fps, but it damn well tried. Most often you’re hovering above 30fps comfortably, but at this point I’m left wondering just what it would take to actually achieve 4K at 60fps, short of a supercomputer, or throwing a second GPU in there (which the Aurora can handle, despite it’s mid-range form factor). Elsewhere, not much phases the Aurora. Every game is a dream, though the more GPU intensive games (as with Rise of the Tomb Raider) can’t hit that absolute 4K/60 dream. Having a good PC for VR is important, and while my PC runs Oculus Rift fine, it struggled with HTC Vive – despite extensive testing it was something USB-driver related that I never solved. As you’d expect, the Aurora runs everything you could demand from a high-end requirement: an Elgato HD60S requires a fair bit of power, but you wouldn’t know it with the Aurora. Oculus Rift – check. Video editing, audio production, music creation – check, check, check.

It’s a beast of a machine, and to get the kind of PC the Aurora is, it will cost you a fair bit of money. That said, once upon a time when asked about buying computers, my response would always have been “don’t buy a gaming laptop, build your own desktop”. The very highest accolade I can give the Aurora is that, while it’s not perfect, my answer has changed, because now I will include the Alienware in that category, because for the price, you’re not going to have to touch the insides of a PC for quite a while (though even if you do, the 850W PSU means you can add anything you need to it), and there’s something to be said for simplicity.

So there you go, after a lifetime of saying one thing, the Alienware Aurora has made me rethink. Now there is an answer for those who just want to go and buy a PC, and it’s the Aurora, though to get the kind of gaming experience I had, you’ll need to spend big.

Review unit supplied on loan via Alienware. Yes, we wanted to keep it, it’s amazing.
Liked it? Take a second to support GodisaGeek.com on Patreon!

Very expensive
Still can't do 4K/60fps (but what can?)

After a lifetime of saying one thing, the Alienware Aurora has made me rethink. Now there is an answer for those who just want to go and buy a PC, and it's the Aurora, though to get the kind of gaming experience I had, you'll need to spend big.