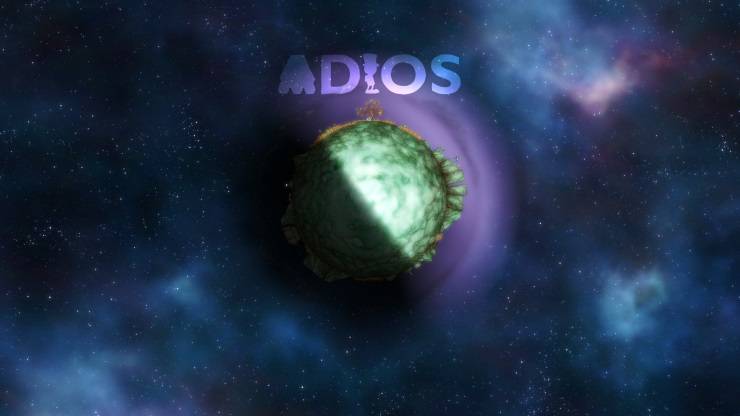 Space really is the final frontier. Personally, I am fascinated by the infinite unknown of space. What is out there? Are we alone? The sheer, unfathomable expanse of it terrifies and fascinates me in equal measure. It is in part this feeling of the vastness of Space that Amazing Discoveries in Outer Space (ADIOS) tries to capture.

ADIOS is a procedurally generated rogue-like space sim where you are tasked with finding a route home. Your spaceship is broken from some sort of accident and you find yourself on an unknown planet in an uncharted area of space. Much like Out There you will need to manage your resources and make decisions about whether to land on a planet or not, otherwise things will go wrong very quickly.

You are thrown into the game straight away, there is a minimal tutorial which does a very basic job of explaining how the game works. You are introduced to new ideas and tools as you progress which makes the first few hours a little confusing and frustrating. For example you get a grappling hook with which to move objects in your way, but this is not given to you until you have managed a few light jumps. Furthermore, the controls are a little fiddly and the camera is something you constantly need to wrestle with, making it a difficult game to get in to. And it feels very much like Out There and even FTL in that there is potency in every decision you perform. Make the wrong one, and it is game over. Decisions have a consequence and a cost. Stay too long exploring a planet and you might use too much fuel which means you don’t have enough to land on the next planet, and therefore cannot perform the next light jump. Games are often short, and in my case ended with me either burning through my fuel trying to get the right trajectory to land on a planet or achieving the correct angles, only to press too hard on the propulsion system, have too much momentum and crash on the planet in a burning ball of fire. Thankfully though there does appear to be some kind of persistence within the world, in that discoveries and clues you have already found remain as knowledge for the next attempt. There is also a short-cut system whereby you can restart the game at a certain point in your journey so that you don’t have to repeat the earlier stages over and over again. This does help you feel like you are making some kind of progression towards your end goal.

ADIOS is a pretty game with charming 2D painted visuals. There is some variety on the different planets you land on with flora and fauna to discover and each planet even has a day and night cycle as it orbits the sun. Each planet is a mystery until you land; some may be barren offering nothing but the opportunity to waste fuel, whereas others have resources and secrets which will help you get closer to home. On some planets items are hidden away so that you will need to leave the confines of your little space ship and take to the planet on foot. If you get stuck you can easily switch back to controlling your ship to come and help your little character out of a tight spot. It’s a neat little twist, especially as some planets may be perilous to your characters health in the form of too hot or too cold, some even have little gravity and you run the risk of leaping off the earthly plane to float for evermore in the dark expanse of space. Despite its simplicity of design and concept, ADIOS is a very difficult game to master. You will be playing the same parts over and over again trying to understand the particular quirks of the propulsion system. There are leaderboards which you can compare your progress against, but your main goal is to do just a little bit better than you did last time. It’s a shame then that the controls make this a bit of a chore over time. Despite the procedurally generated worlds looking different each time, ultimately you will be repeating yourself a lot, and unfortunately, unlike other rogue-likes in this genre, there doesn’t appear to be as much charm or focus on the more cerebral elements of what it is like to be lost in space. ADIOS is not a study of loneliness in the way that Out There manages to convey, it feels more like a jolly jaunt across differing pretty balls which more often than not ends in you running out of fuel because the camera angle has screwed with your trajectory again.

But there is definitely fun to be had. The ship computer is amusing, and the visuals are filled with little funny items and quirks, but the bare bones tutorial, overly sensitive controls and camera erodes that fun over time. Furthermore, without any meaningful story about the horror and claustrophobia of being lost light years from home there feels very little reason to keep going back.

ADIOS is an interesting little game, but fiddly controls and annoying camera can quickly erode that fun.