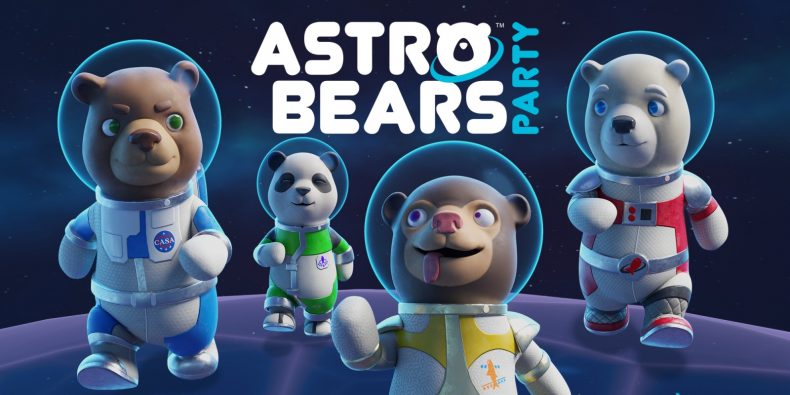 Saying that a game is a ‘perfect fit for the Switch’ is getting old fast. When we saw the console’s original reveal it was obvious what the machine could do for local multiplayer at home and out and about, and it’s really delivered. There are plenty of games out now that make use of the idea that people will be guaranteed to have at least two controllers.

Astro Bears Party is another such game, one built from the ground up to be a multiplayer title and tags on a single player mode for those who can’t wait to have their friends round for a bit of bear astronaut action. The premise (if you can call it that) is a bear, on a small planet running around leaving a ribbon trail in their wake. The ribbon behind you has a certain permanence but retracts after a certain distance, if you make contact with it then that’s the end of your run; so, basically, this is the age old Nokia mobile game Snake in 3D.

In single player you run around collecting rocket fish, collect enough and you move on to the next stage which is faster, your ribbon gets longer the more fish you collect and as a result dodging it as you pursue the fish becomes harder. Thankfully the bears have a jetpack as well, meaning you can jump over the ribbon should dodging it be impossible at the time, it has fuel as well, so you can hover but only for a short time. And that’s basically it. There really isn’t anything more to the game, in single player at least anyway. The game supports (in true Switch game style) up to four players, and in the multiplayer mode there are no fish to collect. Instead the idea of multiplayer is competitive, you’ve got to run around dodging each other’s ribbon trail until one of you makes a mistake and runs into someone else’s. It’s fast, and fun but only really in short bursts because once you’ve done it a few times you’ll want to move on to something else, and the game just doesn’t have that to offer.

The graphics are solid, clean and colourful, there are no jagged edges, it’s bright and moves extremely fluidly, but you’d expect that from a lack of on-screen furniture. The music is a sort of retro techno pop that seems to be all the rage in future based Switch indie games at the moment. It’s all done well, but there just isn’t enough of it, a single player mode with bots or a couple of extra multiplayer modes would have been very welcome. At the end of the day Astro Bears Party is good clean fun but ultimately that fun is short lived.

Not so hot alone, Astro Bears Party comes alive with friends only to quickly run out of steam.