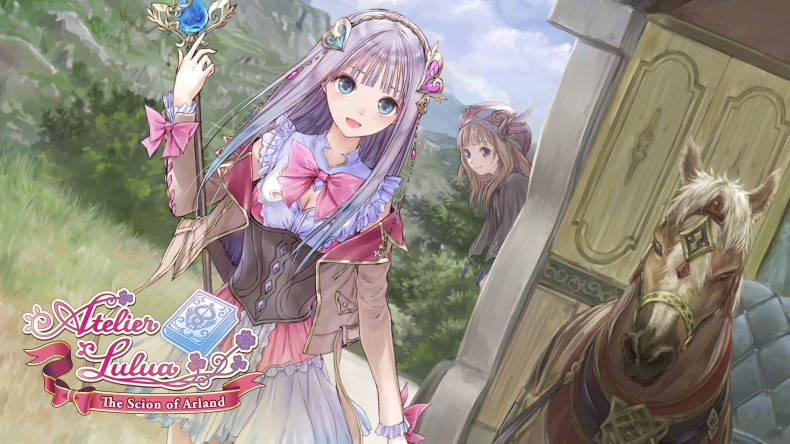 Gust’s Atelier franchise has become one of my favourite gaming franchises when it comes to relaxing experiences. Unlike most JRPGs, these games are more focused on “slice of life” stories, exploration, crafting, and a lot of great art and music. While some entries like Nelke have been disappointing, the core series has mostly maintained its quality. Koei Tecmo and Gust recently brought the Atelier Arland Trilogy to PS4, Switch, and PC and while that set of ports felt out of character, the announcement of Atelier Lulua made the decision of those ports make sense. Atelier Lulua is the fourth entry in what is no longer a trilogy for the Atelier Arland series of Atelier games and it has quite a legacy to live up to. Thankfully, it does a lot right and is definitely a worthy Arland entry and a great Atelier game.

One of the best parts of the Atelier games is the stories never really take the usual “save the world from a massive evil” approach and really focus on characters and their relationships with others in-game. Lulua is Rorona’s daughter (I know, right) who is trying to surpass her mother in alchemy which is quite the task. She discovers a book that no one else can read. This book isn’t your everyday book and you need to fulfil certain requirements to decipher the pages, and this is how the story progresses as you learn new recipes and more. The story is definitely a slow burn but it is super relaxing. I will say that while you can probably play this directly, you’re better off getting the trilogy of games that are definitely worth playing before jumping into Lulua. Barring exploration and gathering, interacting with characters and alchemy are definitely the focus for gameplay here. While you will partake in turn-based combat, it never feels boring and encounters end fairly quickly. Chaining combos is fun and the catchy battle music definitely helps. It feels great to play a new Atelier game that still manages to have the quality of the better games in the series. I also like how Lulua doesn’t really force you into looking at guides online for things to do; everything is very clear when you want to advance the story and progress.

Atelier Lulua sees Gust try to push visuals quite a bit and it mostly pays off. Environments look beautiful and are quite open. They don’t feel as barren as those in Firis either. Character models remain Gust’s strength and I’m still blown away by just how well they transition gorgeous portraits into 3D character models without losing any charm. Lulua even has a very nice interface that is basically a staple for the series at this point. Performance is fine but it is disappointing to have a game that doesn’t really push the hardware to run at a higher framerate. Shadows are the biggest issue with visuals and they are almost always plain ugly and sometimes flicker. You might get used to this but it is noticeably annoying for me on the big screen, though may be less noticeable if on the Switch’s screen. Gust games are known to have great music, with Atelier games the creme de la creme of Gust music. Lulua’s soundtrack is fantastic. I was sceptical about a lot of things going into Lulua given Nelke, but it looks like Gust definitely knew what they were doing here with an excellent soundtrack. Voice acting is sadly Japanese-only and while this is something everyone is used to in recent Gust games, having the 4th entry in a series that had English dubs as an option drop that for Japanese voice acting only is disappointing.

Lulua’s issues are mostly confined to two aspects which are localisation and visuals. The localisation itself is fine for the most part but this release suffers from something many Japanese-only voice over releases suffer from which is a lack of subtitles for every spoken line. Scenes or lines that had no subtitles in the Japanese release likely won’t have subtitles here. This occurs while synthesizing and it isn’t a dealbreaker but if you’re going to just skip out on a dub, the least you can do is add subtitles for every spoken line since this is an English release. Some translations feel a bit too literal and in many cases, the titles above names don’t make much sense. While it is good to see Gust push for better visuals, Lulua has a few visual issues like very poor quality shadows and a lot of shimmering and straight up aliasing even on PS4 Pro. This definitely feels like a direct port of a Switch game rather than one taking advantage of PS4, let alone PS4 Pro hardware like Atelier Firis or Sophie did well. Overall, I wish Koei Tecmo had done a dub for this. I get why they stopped doing dubs and while I am still annoyed by that decision, having a new entry with characters people love and have followed for a long time drop English voices and pull a BlazBlue Central Fiction is very disappointing. Many fans enjoyed the Arland games with English voice acting and having the fourth one straight up drop it is not doing right by the fans. Thankfully, the rest of the game is great and it is good to see Gust get back on track with good quality releases after a misstep. I wouldn’t recommend this for newcomers to the franchise since there are much better entries to get into this series, but longtime fans will find a lot to love in Atelier Lula.

Some visual issues
Some localisation problems

Atelier Lulua is one of the better Atelier games in recent times and a worthy follow up to the Arland trilogy with its relaxing gameplay and superb soundtrack.