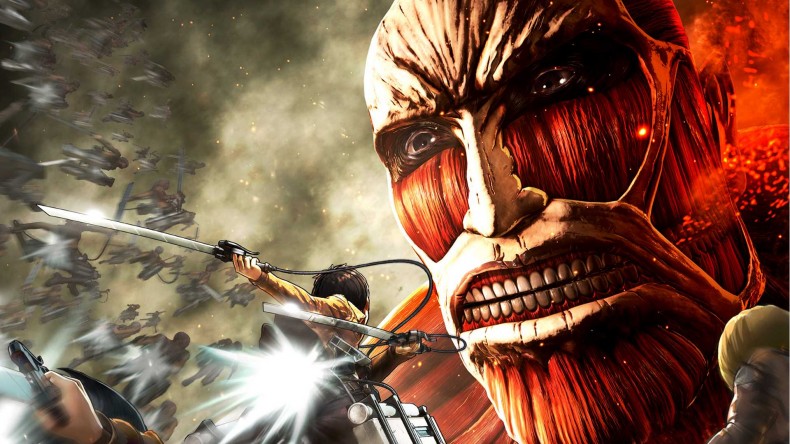 When I reviewed Attack on Titan: Humanity in Chains on the 3DS, I said the IP deserved much more. Fast forward to today, Attack on Titan gets another game based on the anime in the form of AoT: Wings of Freedom. AoT does a superb job of capturing the badass feeling of slicing the nape off a Titan and even has some great visuals backing it up. A handful of flaws and the lack of certain features bring it down a bit though.

Wings of Freedom covers the complete first season of Attack on Titan story wise and has a few cameos from later on in the Manga in the form of certain Titan side missions. A lot of the key moments from the anime have been shown off in Omega Force’s engine which has character models looking really good. The story is split up into chapters representing different moments from the anime. I did enjoy seeing characters like Sasha be as quirky in game as they are in the anime. This is not a Musou or Warriors style game; it’s not all slicing Titans up. The tutorial mission is very good and I’d recommend playing it twice to properly get the hang of things. The main flow to subjugate a Titan is hooking a body part followed by boosting towards it and eventually slicing with your blades. This combo doesn’t change much until you acquire more skills that have you mashing triangle once you attack the Titan. As you score hits, materials are acquired from key body parts indicated by a gold nugget. This adds a slight element of strategy to the mix as you need materials to upgrade your gear. Chapters sometimes end with a boss Titan, which is the same as a standard one, really, but harder to subdue and with more health for each body part.

During missions there’s tons happening on the battlefield, ranging from smoke signals that have you complete certain side missions during the main objective and others that have you rescuing cadets to be rewarded with consumable items for that level. There are some annoying missions early on that have you leading Titans to a trap, and some that require you to protect a target against waves of enemies. The AI here is pretty hard to deal with. Outside of those flaws, the only real problem I have with the gameplay is how repetitive it gets. Given the subject matter, it’s no surprise that a lot of time is spent subjugating Titans, but a difficulty bump would have helped to keep things fresh. There’s an online multiplayer mode available that has you doing survey missions and I played online with a friend for a few hours. It was fun slaying a Titan in coop for sure, but the repetitiveness cannot hide. Visually, Omega Force has done a bang up job with character models. Even the Titans manage to look good and match the anime episodes. The environments, however, make you feel like you’re suddenly playing on PS3. There’s also a lot of visual pop-in from a few meters away, where buildings from far away have loaded but a tree suddenly appears. The characters and expressions look great and will bring up good memories from the anime for any fan. I just wish more effort was put into performance and environments. The frame rate is variable and really drops when a lot of Titans are near you attacking and destroying buildings. There’s also an annoying amount of motion blur that can’t seem to be turned off.

Voice acting is only available in Japanese so if you’ve been watching the anime with the English dub, you’re out of luck here. I like the Japanese voices but an English dub would have been a nice option for fans. Sawano’s amazing score for Attack on Titan is absent here and you have an original score used in the game, which is a bit of a shame as to many, Sawano’s score is integral.

Fans of the anime have a lot to enjoy in Wings of Freedom, even with the flaws. If you have never watched it, I urge you to at least watch the first episode. It will definitely be enough to get you to continue watching. This could have been fantastic if performance issues were ironed out and it had the Sawano soundtrack. I’m still waiting for the definitive Attack on Titan game, but this is the closest we’ve been to one.

A great way to re-experience the first season of Attack on Titan in game form, and Omega Force have done a fantastic job making you feel like a complete badass despite repetitive missions.