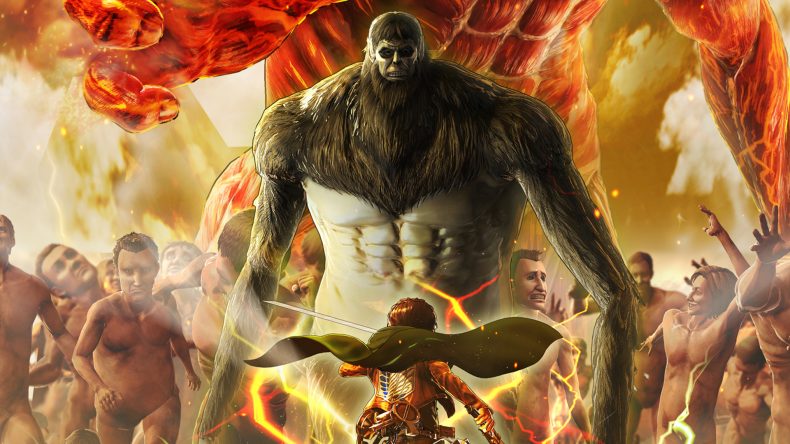 AOT 2: Final Battle is available in two formats for consoles and PC. The first is the complete experience which includes the base game from last year and the Upgrade Pack that has the new mode and the Season 3 anime content for the game. This is priced the same as any full priced release. The Upgrade Pack is available to bring the base game from last year up to speed with this new release and the pricing is a bit high given the content. This release feels like excellent value for new customers, but people who sprung for the base game last year are kind of getting the short end of the stick with the asking price for the expansion. In terms of the anime, AOT 2: Final Battle covers the story from all three seasons. If you missed the original AOT: Wings of Freedom, you don’t really need to bother with it since AOT 2: Final Battle includes it alongside the second and third season content. The naming is really something, isn’t it? When the final season of the anime airs next year and Koei Tecmo announces a game, I look forward to playing AOT 3 that covers season four. In terms of core content, Final Battle includes a new strategic mode that impressed me alongside the story content from season three in its own mode.

If you’ve played AOT 2 already, you will be a bit disappointed to realise that the season three content is completely separate from the campaign you experienced already. It takes place in its own mode called Character Episode Mode that has a flowchart split up into action sequences with gameplay and story segments told through visual novel like panels and actual cutscenes. If you are going into this fresh, you create your own avatar for the story from the first two seasons and play alongside everyone you love from the anime. The Territory Recovery mode is actually pretty great and a fantastic addition to this game. I hope they give this mode more focus with the next game because it absolutely deserves your time. Your aim here is to progress turns like a board game or a recent strategy game while reclaiming territory and leveling up characters and gear. The inclusion of the thunder spear is amazing and it feels superb to use during gameplay. I love it when developers make games more accessible. I enjoyed the default controls for AOT 2 and didn’t really have trouble with them but I know a few people who struggled. Omega Force has added a new control assistance option that lets you slay titans with greater ease and without worrying about timing your button presses right.

Visually, AOT 2: Final Battle is gorgeous almost all the way. The biggest visual issue is the pop in for textures and foliage. This affects every console version of the game I played. Character models and cutscenes look great though. On the performance side of things, the game felt very good but it tanks when there are too many titans close to you and you start panning the camera. I would’ve preferred a dynamic resolution to maintain 60fps on Xbox One X and PS4 Pro.

Having just reviewed Kill la Kill the Game: IF that not only had the anime music and also all the English voice actors come back for an English audio option, it is even more disappointing seeing AOT 2: Final Battle still have no licensed music and no English voice acting option. I’ve watched all three seasons of Attack on Titan with Japanese audio so that aspect only really bothered me in chaotic moments when I’m trying to do multiple things and someone shouts in Japanese and I have to read small subtitles to figure out what they want me to do. The big downsides to this release barring the asking price for previous owners for the expansion are no doubt the flow of the new story content and the fact that your created avatar are not present here. The way the flowchart and story is structured, I feel like this was initially planned as a budget standalone game rather than an expansion for last year’s entry. While Omega Force has absolutely nailed season three’s content and having only recently watched it, things are superbly done, I still would’ve preferred being able to use my created character.

AOT 2: Final Battle is an absolute essential for fans of Attack on Titan. Having now played it on Xbox One X, PS4 Pro, and Nintendo Switch, the Xbox One X version feels like the best version (as expected) of an already amazing anime game. While I still am annoyed by the lack of Hiroyuki Sawano music (more so because Kill la Kill The Game: IF managed to include all licensed music) and with how the subtitles get annoying during combat, AOT 2: Final Battle is most definitely worth your time as a new purchase. For those who already own the base game that was released last year, the asking price for the expansion DLC might be a bit too much.

AOT 2: Final Battle is no doubt one of the best anime games ever with Omega Force absolutely nailing the source material.