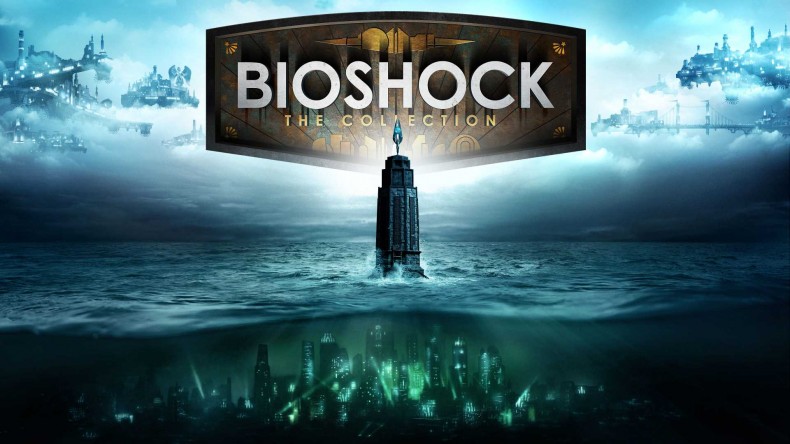 Bioshock is one of those games that defined the last console generation for many people. An utter masterpiece in almost every sense, that it’s subsequent sequels could never quite match up to its glory was hardly a solid criticism. Very few games before or since have bettered it for gameplay, story, setting, or atmosphere. Just the remaster of the first game would have been enough to part many fans with their money, but the Collection features all three games in all their splendour.

The original and its immediate sequel have had the most work done to them, with full re-skins adding wonderful detail to the decaying halls of Rapture, the underwater Utopia that never was. The first game’s story is masterfully told through audio logs and often disturbing visual clues, or imparted by the various NPCs called upon to help out nondescript protagonist. Trapped in Rapture, a sub-aquatic city torn apart by the drug known as Adam, your only hope is to follow the guidance of the mysterious Atlas and discover who you are and why you’re there.

Mixing melee combat with an assortment of guns and sorcery-like genetic enhancements called Plasmids, Bioshock offered an almost unprecedented level of choice for an FPS as you discovered more and more new ways to defeat Adam-addicted splicers and the terrifying Big Daddy, a diving suit-clad monstrosity whose sole purpose was to protect the “Little Sisters”, horrifying little parodies of children created to suck the Adam from the recently deceased with massive needles. The atmosphere was extraordinary then, and it’s even better now thanks to the vastly improved visuals. Rapture feels more alive than ever now, with glittering water effects, powerfully effective light and shadow play and a smoother, faster frame rate. Shadows play tricks on your eyes and mind, while flickering flames and sparks of electricity combine with neon lights and the tell-tale golden flash of items worth investigating to spread a dusting of stark, twinkling colour upon the bleak, burnt flesh of the rotten city. As a result, Bioshock Remastered is nothing short of beautiful.

Likewise, Bioshock 2 looks great. The environments are rarely much different to those of the first game, although you spend more time actually underwater thanks to something I won’t spoil here that’s story related. The mystery is no less compelling, however, and the gameplay is so similar you can’t really criticise one without the other. The multiplayer is absent though, which is oddly pleasing as no one wanted it then and we still don’t want it now. It does include all the DLC (including the fantastic Minerva’s Den), as does Infinite. What’s remarkable is how well the first two games have aged. Fair enough, the improved shadows and textures are incredibly welcome and make a major difference to the aesthetic, but the gameplay hasn’t been altered and both games are still so utterly playable. I was engrossed in both within minutes of starting and, although the first one is the better game, both were still hugely compelling. An option to modernise the control schemes would have been welcome, though. I mean, who jumps with Y in 2016?

Being only three years old, third game Infinite has had less of a graphical overhaul and has instead simply been sharpened in places, with greater detail added to the environs and, of course, a boost in frame rate and resolution. Maintaining similar themes to the other two, Infinite relocates from beneath the Atlantic Ocean to the skies of an alternate America. Big Daddies are out and Handymen are in. Little Sisters are no longer your concern, and instead your focus is on Eizabeth, Infinite’s most charming and important character.

As Booker DeWitt, your job is to keep Elizabeth safe and find a way to escape the flying city of Colombia, a twisted utopia ruled by Comstock, a self-proclaimed Prophet with a god-complex. Arguably it lacks some of the decrepit charm of Rapture, but Colombia’s sun-drenched architecture and endless blue skies create a false sense of security and prosperity that hides a dangerous cancer beneath its surface.

Gameplay here is a familiar mix of guns and plasmids, here renamed Vigors. The greatest addition beyond Elizabeth’s oddly calming and reassuring presence is the sky-hook, a mechanical device that allows Booker to flit about the various districts of Colombia using its mooring lines. It’s slick, fluid and always exhilarating, and it’s so well-implemented that it allows BioShock Infinite to maintain its own identity while keeping the established themes of the series afloat.

Playing them in order, despite Infinite’s aesthetic departures, still makes most sense. Flitting between them forces you to keep adjusting to the different control schemes, and the bright sunshine is a system shock after wandering around Rapture’s shadowed corridors, but that’s all entirely up to you. While I remember certain elements of Bioshock more fondly, playing them again now, altogether, throws up moment after memorable moment that remind me, minute-to-minute, why a few dips in quality here and there can’t rob this trilogy of its “masterpiece” status.

Like The Nathan Drake Collection, this is an essential purchase for anyone who has left the last generation of consoles behind or who has never had the pleasure of playing these titles. While they vary ever so slightly in quality, with the original edging out the others and number 2 valiantly bringing up the rear, they are all incredibly playable and deeply compelling. With all the DLC chucked in for good measure, Bioshock: The Collection is worthy of a place on anyone’s shelf.

While they vary ever so slightly in quality, with the original, for my money, edging out the others and number 2 valiantly bringing up the rear, all 3 games are incredibly playable and deeply compelling.

New Tales from the Borderlands review