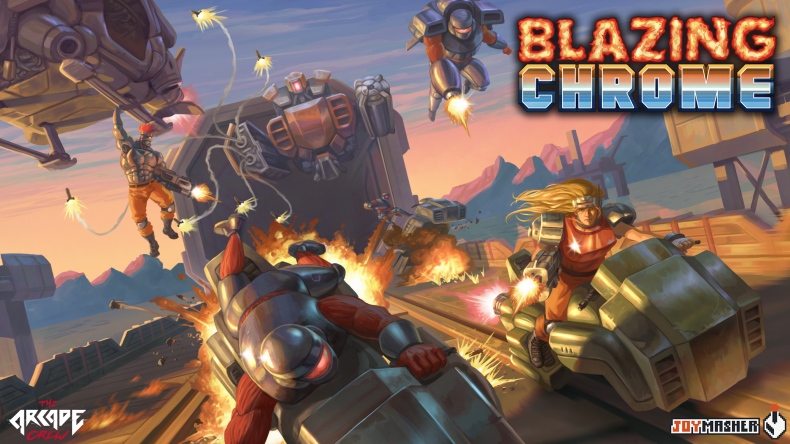 Anyone old enough to remember the days of Contra and Metal Slug, particularly the arcade versions, is probably sick to death of difficult games being described as “the Dark Souls of” any given genre. Hell, I think we’re all sick of that. But I think it’s fair to say that games of the 80s and early 90s were far more difficult than anything FromSoftware has ever produced. I mean, Ninja Gaiden, anyone? I’m not saying this to annoy people, but today’s “difficult” games are still far more accessible than games of yesteryear. This is a good thing, even if we do still have a long way to go in terms of accepting accessibility for all players, as the whole Sekiro debate taught us.

The reason I’m talking about all this, is because JoyMasher’s Blazing Chrome really isn’t messing about. It isn’t here to hold your hand or offer assistance when you’re struggling, it’s an unashamedly retro game that is designed to mimic the whole retro arcade experience, down to the sometimes plain unfair difficulty level.

Right off the bat, this is going to limit its audience. That’s okay though, because sometimes games, like films and any other form of media, aren’t going to appeal to everyone. In fact, sometimes they’re made for a very specific set of people; in this case it’s fans of old arcade games (there’s a reason I specifically mentioned Contra and Metal Slug, at the start of this review) and the “one more try” mentality they so often embodied. Blazing Chrome does at least offer an easy mode, but like all old console ports of arcade games, it only really equates to a couple of extra lives at the start. Like all self-respecting sci-fi shooters of the 80s and 90s, Blazing Chrome is set in the year 21XX. Actually, many of those were set in 20XX, but as we’re in 2019 and there is no sign of a robot uprising, I think we can forgive JoyMasher moving with the times. So, 21XX it is then, and the robots have wiped out most of humanity. The few surviving humans are fighting back, and you get to play as Mavra, a badass lass who is well up for scrapping as many robots as is humanly possible. Perhaps unexpectedly, her partner (and your other choice of character) is Doyle, a reprogrammed robot with an impressively 80s hairstyle and attitude. Don’t ask why he has hair, or why he has a muscular physique despite being made of metal, it’s just part and parcel of that old school design.

Whether you play one- or two-player, as Mavra or Doyle, the objective is the same: destroy anything that moves, with any weapons at your disposal. It’s a simple concept, as you run and jump in glorious side-scrolling fashion, firing in eight whole directions. Don’t expect this to be a twin-stick affair either, there were no second sticks in the 80s. All movement and aiming is done on one stick (or the d-pad, if you’re like me and prefer that for 2D games like these), which takes a bit of getting used to after all these years of using dual-analogue controllers, though holding R1 allows you to stand still and aim, which can be useful in certain situations. Honestly though, this game is not designed for careful aiming, it’s designed for running and gunning, especially as any single hit will cost you one of your precious lives. Whether that’s a hit from a bullet or simply coming into contact with an enemy, it’s a one-hit-kill situation for you, dear player. The thing is, like all of these old arcade games, Blazing Chrome isn’t a long game. Realistically, you can finish the whole campaign in a handful of hours, but it is designed to be replayed for higher scores. That said, it’s unlikely that you’ll finish many levels on your first go, which is where that “one more try” mentality comes into play. Thankfully, there are some checkpoints in levels, so if you lose all your lives and choose to continue, you won’t be dumped back at the very start of a level. It’s one of the only modern concessions in the game, next to being able to save between levels in order to return later. Even then, it’s rather limited.

It does like to change things up a little, during some of the levels. Although it’s mostly a left-to-right affair, one level starts you off on a speeding hoverbike, chasing down a speeding train. This reminded me of some of the on-rails thrill-rides of Gunstar Heroes, albeit with far greater stakes. Another level straps you into a mech suit and blasts you through twisting tunnels in a nod to Space Harrier, all with a Mode 7 visual style for that added nostalgic feel. Honestly, everything in Blazing Chrome looks like it’s come straight out of 80s arcade cabinets, with nary a modern shortcut taken. Even the sound is distorted, with some hilariously old school dialogue soundbites. Despite the whole nostalgic packaging, I can’t help but think that JoyMasher has been a little too keen to recreate the vibe of those old arcade shoot ‘em ups in Blazing Chrome. Many players will barely make it through the first level, and those that do will probably give up shortly after, because it really is too unforgiving at times. Yes, my ageing reflexes are sometimes to blame, but sometimes enemy attacks are just unavoidable. Whether it be because four of them have jumped on you at once, or because there are so many screen flashes it hides the hail of bullets that are heading at your face, there are times it simply feels like the odds are rather weighted in favour of the game. I have a finite amount of patience and it ran out long before I finished playing.

Yet despite this, I still have to commend JoyMasher’s efforts. Blazing Chrome is a blast, wearing its Contra and Metal Slug influences on its sleeve with immense pride. But beware, it won’t go easy on you and it doesn’t care for modern concessions and accessibility, so if you prefer your games to be fun and your marbles to remain where you can see them, this is not the game for you.

Will be too hardcore for many players
Some cheap enemies

If you’re into your classic shooters and don’t mind a few cheap deaths along the way, Blazing Chrome is a pulse-pounding thrillride that wears its influences proudly on its sleeve.