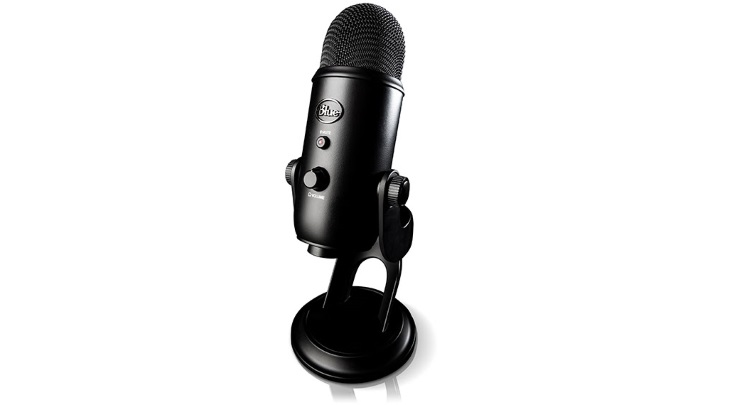 The Blackout Yeti comes from the same stable of expertise as the Blue Yeti Studio that we were big fans of when we reviewed it, previously.

If this is your first ever Yeti product then one thing you will notice immediately is the substantial weight and size of the microphone itself. The entire matt black finished unit is metal, giving the impression that what you have in your hands is something professional and constructed to a high standard. It’s a weighty beast and best suits a place on the table in front of you rather than being carried.

But that doesn’t mean it isn’t portable, and all it needs to power up is the supplied USB cable into your PC and you are as good as ready to go. Even for computers you haven’t used with the Blackout before, a couple of settings clicked in your control panel and you are good to go. The only thing I noticed is that while the Yeti claims a simple set up, you do need to make sure you have your own sound recording software installed. Personally, I use Audacity, and there were no problems at all in using the two together. You also need to unplug the Yeti from the PC in order to power down, as there is no on/off switch, which isn’t a massive complaint but it means for longer sessions, I kept my laptop plugged in to avoid unnecessary power draining while the Yeti was sitting there on mute.

Underneath the classic looking exterior are a set of triple condenser capsules that can work independently of each other in order to create the different modes for recording. A gain knob controls the microphone sensitivity with ease. You can also set the volume for headphones so you can listen in real time while you record which was useful to check recording levels as I went and adjusted accordingly.

One of the main reasons to use a Yeti is the simplicity to get the right mode you need for any given situation. The Blackout Yeti makes recording audio as easy as child’s play. The four main modes are designed to take an optimum recording, whether you are recording a podcast or a band rehearsal, an interview, or a business meeting. More importantly, moving between modes is the simple act of flicking a switch without any need to look at re-balancing levels or playing around with volume controls.

Stereo is designed to pick up sounds in front and beside the Blackout, Cardioid specializes in sounds coming from one direction – so ideal for ramblings and that hit record on the old acoustic. Omnidirectional is designed for events where everything needs to be recorded, while Bidirectional is where you go for interviews to be on the record in crystal clear fashion. I’ve recorded a small sample so you can hear for yourself. There is a theme, so see if you can guess. Though no prizes for guessing, obviously. [Editor’s note: this recording was in no way endorsed or commissioned as part of the review, it was just Richard being Richard]

Blue have produced an extremely easy to use and versatile microphone with the Blackout. The design is sturdy and well thought out. It does seem more suited for a home studio set up than an active out in the field mic – as it is a fairly bulky customer to fit in a bag with a laptop or PC.

There really are few gripes considering the full package that Blue offer with the Blackout Yeti. If you are considering a Microphone purchase to set the world of podcasting on fire, or are recording a group meeting or event, then the Blackout should be definitely considered as one to take home.

Review sample provided by Blue.
Liked it? Take a second to support GodisaGeek.com on Patreon!