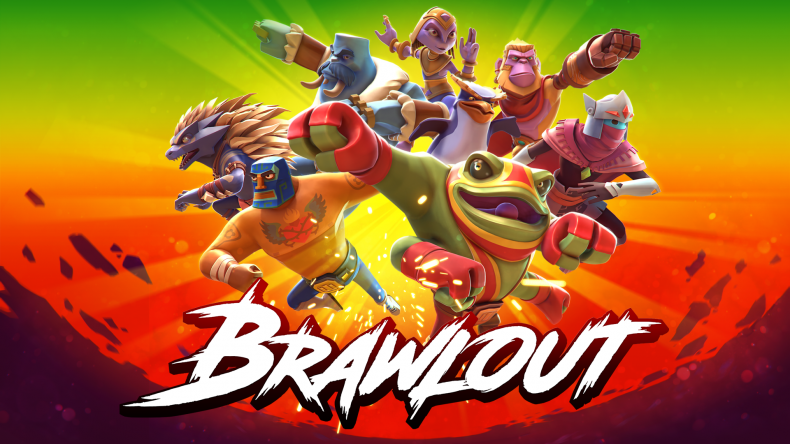 Ensemble fighters are a super cool idea. Take Smash Bros. for instance, Nintendo’s most famous brawler franchise, which features a roster of characters from a few dozen beloved franchises. It’s the only game where Mario can jump into an arena and square off against Link, Samus Aran, and Donkey Kong and no one even raises an eyebrow. Sony attempted something similar a few years back with PlayStation Allstars Battle Royale which, sadly, didn’t involve Sly Cooper, Nathan Drake and Sackboy in a 100-man deathmatch.

The difference between those two properties and indie fighter Brawlout, though, is that so many of their characters were instantly recognisable, and often had moves tied directly to their standard repertoires. The rosters are huge and varied and, while PS Allstars was undoubtedly the pretender, both delivered enough variety and uniqueness to stand apart. My biggest issue with Brawlout is that, being only a so-so follower of indie games, I only really know a few of the characters. Playing with Juan from Guacamelee, Yooka-Laylee, or the Drifter from Hyper Light Drifter is cool, but the others might as well be random, generic creations. But that’s me. If you’re a bigger fan of the indie scene, you might be happier to see the likes of Nightmara and Pacu throwing down.

The roster itself isn’t all that impressive either way. Of the eighteen characters, eleven are actually reskins of one another with slightly varying moves, which has got to be disappointing whether you know who they are or not. As a result, I kept going back to the ones I knew the best and using them – and when I did select other characters like the aforementioned Pacu, I was surprised at just how standard they felt. Juan, in particular, is a great character for a fighting game, bringing over his uppercut and dash moves that not only make for a solid offensive arsenal but are handy for avoiding ring-outs. The Drifter, armed with his sword and sliding ability, feels almost completely different to the others. I had a definite sense of déjà vu when playing Brawlout. The layout, movesets and victory conditions are lifted almost wholesale from Smash – even down to a character that can literally suicide you out of the ring (in Smash it’s Kong; here it’s Pacu). There are ranged fighters and superfast ninja types, but there’s nothing at all we haven’t seen before.

Perhaps the only truly defining element in Brawlout is the Rage meter, which builds up beneath the character portrait and unleashes a special high-damage mode. While that’s not overly impressive, you can opt to spend the meter as soon as it’s above halfway, and it’s one of the most effective ways to cancel an enemy combo and get yourself out of trouble – or even break your own combo chain mid-animation. If you’re in a spot with three other characters wailing on you, it’s nice to have the option of clearing some space to regroup. It’s fair to say that while Smash is a very fluid, almost weightless fighter, and Allstars is somewhat heavier, Brawlout kind of occupies a middle ground between the two that manages to feel inconsistent more than anything. If the characters fell into even hidden categories, that’d be okay, but in some cases I found that weight and impact seemed to vary by move rather than by fighter, which is a tad weird. For example, Juan’s uppercut is a superfast move that’s great for taking the enemy by surprise at the edge of the stage, but his standard attacks felt just a little on the sluggish side.

Some will call it unfair that I keep referring to Smash, but dammit Brawlout is so similar that I just can’t help it. It almost, almost feels like a spin-off from a less experienced studio. Even the execution of special moves is the same, with two main buttons activating them contextually based on the direction you’re pushing in. The main line-up is at least diverse enough to appeal to a variety of play styles, and with Yooka-Laylee (and, soon, the Dead Cells Prisoner) joining the roster, there’s a little more colour and appeal to fans of more recent indie releases. One thing I can’t fault is the aesthetic. Brawlout looks pretty gorgeous most of the time. It runs at a fair old clip, rarely dropping below 60fps, and the bright, detailed backdrops really pop. Stages are mostly specific to the roster, and you unlock them by finishing the single player mode with different fighters. Extra characters and skins can be unlocked by levelling up your fighter mastery, and earning enough in-game currency to get a crack at a piñata. Angry Mob could easily have added a microtransaction store, but kudos to them for avoiding that. Everything can be earned in-game, even if it takes a little while to do so.

As party fighters go, Brawlout is a decent enough contender, especially if you’re playing on Xbox One or PS4, both of which shall remain forever Smash-less. Its direct similarities to Nintendo’s franchise might have done it harm on the Switch, but there’s really not much like it on the other platforms. It plays smoothly, and almost always looks lovely, it’s just a shame it doesn’t feel all that accomplished, and the roster isn’t a little bit more esteemed, especially given the vast array of indie games available to recruit from. Still, it’s an enjoyable enough exercise with plenty to unlock, so if you can overlook the balance issues and an inherent lack of originality, it’s worth a punt.

An enjoyable enough party fighter that doesn’t quite do enough to stand out.