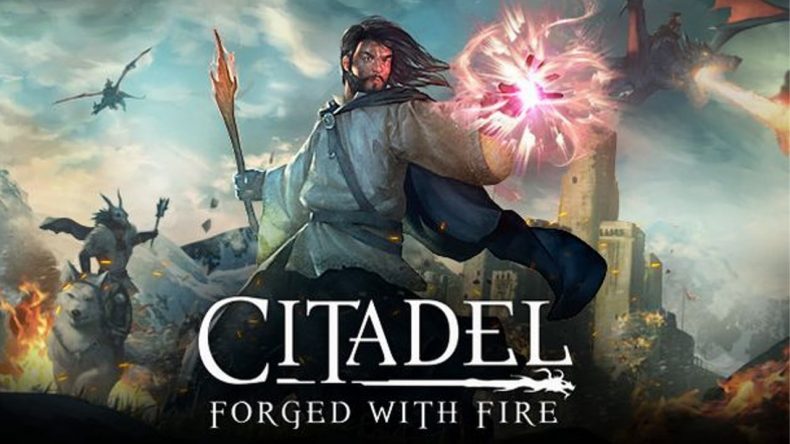 Citadel: Forged with Fire is pitched as a huge, online sandbox RPG with light survival elements, base-building, magic and the ability to tame and ride fantastical creatures. The DNA of survival games like Rust, Ark: Survival Evolved, Conan Exiles and more run thick through it, although with nothing but a relentless, soul-destroying grind awaiting you, particularly if you are playing on your own. There is a slicker, more attractive presentation than some of its inspirations, and the draw of forging your path as a newly minted wizard to the likes of an all powerful Battle-Mage riding a Dragon or Phoenix into battle are strong. However, it seems that whilst Blue Isle have taken inspiration from those games, they haven’t done much to mitigate the issues that each of them have.

You begin as a freshly spawned wizard, waking up after being literally forged in fire. The character creation tools are a hilarious blend of what I’m sure is an earnest attempt to give you the freedom to create the character you want, and some real body-shock horror. Fiddling with the “randomise character” tool gave me avatars with pin heads, huge legs and tiny T-Rex style arms, or an impossibly tall character with long willowy limbs, a head four times the correct proportions and a wide, rectangular body. I settled in the end on an slender build with correct body proportions and a light lilac tone to her skin in a crude attempt at a Wood Elf style character. You can choose to play in PvE or on a PvP server, and there are a fair number of official ones to choose from. Unlike Conan Exiles in the early days of release, each server I have spent some time on always seems to have space and I have always been able to access my character with no issue. PvP is a harsh mistress though with everything in the world already trying to kill you without the added layer of other people. PvE gives you some time and space to figure things out, but again if you are going to get the full experience it is best to join some friends as doing anything in Citadel takes time. Time spent gathering resources, time spent levelling up and even time spent figuring out how you even do certain things.

If playing with other people isn’t your thing, then you can play entirely in Single Player, however I would recommend that you play around with some of the settings for resource gathering, experience point gain, building degradation etc. as otherwise you are in for an extremely tedious time of gathering resources, getting killed by a bear, boar, wolf, sprite, inexplicably angry eagle, bandit, acid pool (interchange as required), re-spawning, trudging back to your death point, trying to pick up your items, being killed again, losing all your items, re-spawning, sighing in frustration and logging off. If you can bear the first few hours things do settle down to a certain extent, however despite there being a “Tutorial” of sorts, nothing in the game is explained to you. After spawning for the first time an NPC will give you a couple of mundane quests to follow, things like gathering stones and wood from the ground that can be utilised to fashion an axe, or gathering some plants and berries, your reward for which will be some kind of fruity soup. You aren’t explicitly told how to craft these items for yourself though, so much so that when I eventually broke my first axe I couldn’t work out how to repair it or make another one. There are also other tutorial missions that ask you to gather some “natural essence”, but there is no direction or hint as to how you gather it.

Similarly, at one stage you are asked to build a camp fire, but again given no direction how to do that. And, once you finally figure out how to access the building menu (which isn’t contained within the main menu), you will have to figure out why there are some areas you can’t to build on and others you can, despite them looking almost identical. Furthermore the recipes themselves are confusing. Everything you want to build requires at least one wooden platform. One wooden platform costs 25 plus 50 wood, so 75 wood then? A wooden wall is just a simple 25 wood, so why is the recipe deliberately obtuse for a platform? Every activity you perform in game will give you some XP. When you level up you are awarded with points that you can put into either your health, mana pool, carry weight etc. and also some “Knowledge Points”. These Knowledge Points can be spent across a variety of things, essentially unlocking new recipes for you based around loose types: Building and crafting station recipes, weapons, armour, potions etc.. Items are gated behind your level, for example you will have to wait until you have reached level ten before you can spend points to craft a broom that will help speed up your ability to traverse the enormous map. Utilising a broom will use mana though, so you will also need to ensure that you have spent enough time gathering resources to be able to craft potions to replenish that mana, rendering the broom unlocking at level 10 to be realistically a utility item for much later. That is of course also dependent on how you have allocated your Knowledge Points. If you are playing at the default settings in single player or on an official server you are unlikely to have actually accrued enough points to have the various recipes you will require to effectively utilise a broom by level ten any way. Particularly if, like me, you are still slogging away gathering 25 plus another 50 wood to make platforms!

Magic is a key feature of Citadel, and it is an interesting feature. I really wish some time had been spent on explaining how to use it effectively rather than fumbling your way through it though. Working out how to effectively use it is another frustrating episode, but after a little while I have ascertained that you can equip a variety of different weapons including an axe, a wand, a staff, even some gauntlets all of which can be imbued with a variety of different spells across different schools of magic. Some spells can be cast on your self with others focused on blast damage or a beam of continuous magic. Each item can have up to two spells attached to it and there is some potential there to have some fun experimenting to find a build that suits you. Casting costs mana which will slowly regenerate over time, and can be replenished via potions and jumping into mana pools that are at one of the three safe locations on the map. Visually I have been pretty impressed with the way Citadel looks. There’s a fairly derivative but strong art style, and the slightly saturated palette even looks pretty at times. There is some of the jankiness that these types of games all seem to have which is most noticeable during combat with some sluggish hit detection and some creatures having an enormous range to their attacks which can make battle, certainly in the early hours, a bit frustrating. Building feels pretty good with most items snapping neatly into place without too much fuss, but I am frustrated that if you place an item incorrectly you can’t just pick it up and move it. Instead you have to destroy it and rebuild it.

Destroying the item only returns some of the resources back to you though, meaning that if you place an item by mistake, it literally costs you to correct it. In a game that already demands so much of your time to even get to the point of building things it feels a little churlish to ask you to spend some more to correct it. And, I know that these time sink activities in this type of online MMORPG are common in an attempt to keep the balance on a heavily populated server, but why is that the case in a single player game on standard settings, or even a PvE server on those same settings?

It isn’t all terrible, and I do feel that with some attention focused on quality of life improvements and perhaps a little more respect for the player’s time there is potentially a really fun game underneath. There are lots of caves and interesting things to explore which have loot in them, as well as enemy camps to raid, dungeons to delve into and mysterious monoliths that will provide you with a temporary buff. There is some potential with the different crafting recipes as well as the items you can find in chests and in dungeons to really experiment with different builds. The ability to tame and ride creatures is also a draw, but there is also a significant time investment in all of these activities, one that I question the worth of. Time is perhaps our most precious commodity, and I really feel that at times Citadel: Forged with Fire doesn’t respect that.

There is potentially a fun game underneath, but Citadel: Forged with Fire is mired in a relentless time-draining loop of meaningless activity

You may also like
Blue Isle Studioscitadel: forged with firePC