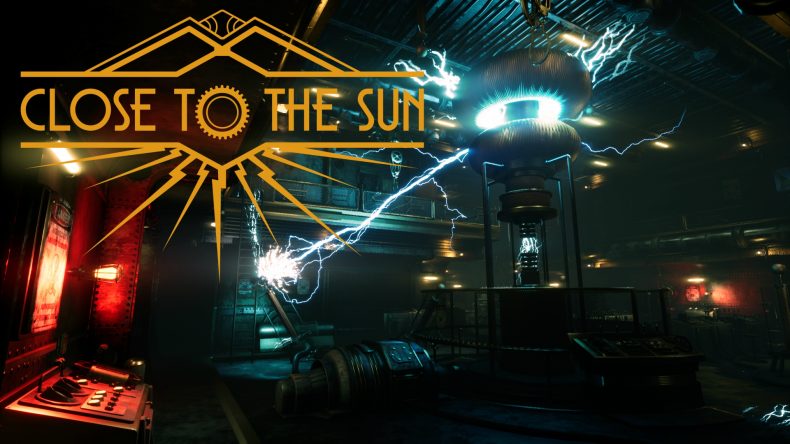 If you have ever played Bioshock, particularly the original and Infinite, you will remember the first time you were introduced to the setting. Whether it be the stunning underwater utopia of Rapture, or the gorgeous flying city of Columbia, the sight of such unique and breathtaking places instantly started the cogs working in the minds of every player. Rapture in particular had me wondering what had happened to its residents and how things had gone so wrong.

Close to the Sun will inevitably draw comparisons to Irrational Games’ brilliant series, not least because of its steampunk technology and 1930s Art Deco stylings, but also its theme of science and the consequences of going too far. Unlike Bioshock, there is no combat, but there are certainly threats that stalk the halls and laboratories of the Helios. Perhaps taking its cues from the likes of Amnesia, SOMA and particularly Outlast, Close to the Sun puts all its eggs in a basket labelled “leg it!”

The year is 1897 (yes, I’m aware that Art Deco design wasn’t around at that point, but time has little meaning on the Helios, it seems) and Nicola Tesla’s discovery of electricity has gone a little far, with his inventions seemingly making him the ultimate power in the world. Tesla built the Helios and invited the greatest minds in the world to this utopia of research and invention, which unfortunately had a few issues somewhere down the line. As journalist Rose Archer, you have received a letter from your sister Ada. She asks for your help, pleading that you come to the Helios to find her. As your automated boat reaches its destination however, the sight of rough seas and dark clouds almost hides the colossal silhouette of the Helios, gone dark from some unknown cause. It’s an impressive visage, hence why I mentioned the opening of Bioshock earlier, and once you get inside and the door locks behind you, revealing the word “quarantine” painted in an ominously red colour across the other side of the door, you realise that you’re in for a bad time.

It has to be said that Storm In A Teacup knows how to build atmosphere. The entirety of the first two chapters are a masterclass in building tension through both sound and visuals, as well as crafting a world that really does pique your curiosity. There are hints of Tesla’s growing madness and paranoia regarding his rivalry with Thomas Edison, not to mention some rather grim scenes aboard this otherwise seemingly abandoned utopia, and it all adds up to one heck of an impressive start to this exploration horror game.

There are basically two sides to this game, but unfortunately one of them is tedious and repetitive, quickly undoing the great work done in building the atmosphere. The best side is when you’re spending your time exploring the Helios, walking around in first-person and finding clues about the events that transpired before you arrived. You’ll find letters, newspapers and mysterious notes that all help to fill in the blanks left by the story. During these parts, the music and ambient sound will combine to keep you on edge even when you think you’re safe. The visuals and art direction ensure that your attention is drawn to important items or points of interest, while the voices of Ada and another survivor, Aubrey, help to keep the story flowing as they point you in the right direction via radio. But all this atmosphere and quality work often falls down when danger looms over you. You see, it’s no coincidence that I mentioned Outlast earlier, because the other side of Close to the Sun revolves around being chased through the corridors and halls of the Helios. The art direction no longer subtly draws your attention to your goals and you’ll often find yourself running into dead ends or simply not knowing where you’re supposed to go, and when you’re inevitably caught, you’re forced to watch unskippable scenes of your drawn-out murder. The game does try to vary things up, introducing different pursuers and other dangers, but it just becomes predictable and I soon began to lose interest whenever another chase scene began. Once you’ve seen one chase, you’ve more or less seen them all. It’s a huge shame.

That’s not the only issue either, as the PC version has texture issues that were also present in the preview build that I played recently. To be clear, I played the game at 1080p with all settings on “high” but there were moments where many textures simply wouldn’t fully load in. The Unreal Engine has always had pop-in issues with its textures, but these ones simply never get to the point of popping in. The textures would load if I upped the texture quality to “very high” but that resulted in some choppy framerates during busier scenes, and in no way can be described as a fix for the problem. Hopefully this issue won’t be present on release, but it was extremely distracting when I played the game.

Close to the Sun’s potential is staggering. On paper, it’s a blend of Bioshock and Outlast, with a high concept story that blows the mind and a visual style that is just a joy to behold. Well, except for the dead bodies and stuff. I just wish the chase sequences had any of the quality of the rest of the game, because then we could have had one of the best horror games of the year, instead of merely a decent one.

Incredibly atmospheric
Excellent use of sound

Close to the Sun is a masterclass in atmosphere and storytelling, sadly let down by poorly-directed chase scenes that quickly grow repetitive and tedious.