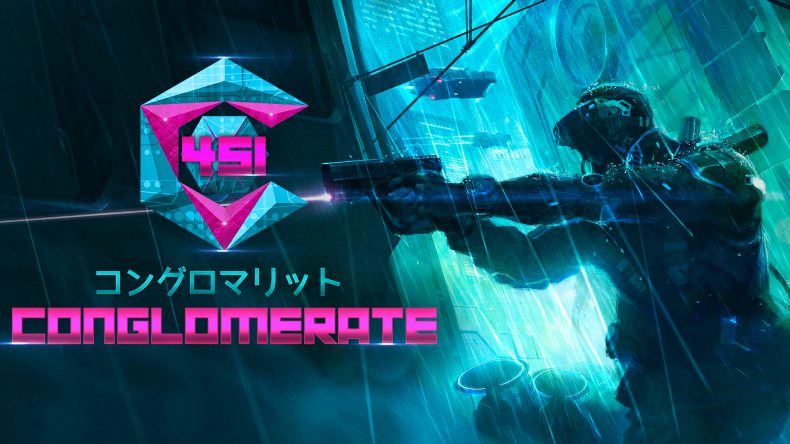 What with a certain game by CDProjektRED looming large on the horizon, it’s understandable that the cyberpunk genre is getting a bit of interest recently. Having sampled the neon-drenched delights of Black Future ‘88 last year, I’ve recently delved into the murky underworld of Conglomerate 451, a grid-based, first person dungeon crawler from RuneHeads.

It has been quite some time since I played a game in this particular sub-genre, the most recent being The Legend of Grimrock and the first being Eye of the Beholder way back when, and so I’ll be honest in saying that I wasn’t sure exactly what to expect from RuneHead’s game. To say I was pleasantly surprised would be a bit of a stretch, but I am fairly impressed with the core systems in Conglomerate 451 and how they gel together.

Similarly to XCOM, you don’t play the guy or gal with their boots in the dystopian mud, but rather the Director, the overlord controlling the fates of your emotionless grunts in the defence of humanity. Well, I say “humanity” but this neon clusterbiff of a city is one of those places that you wonder why you’re bothering with. Four either military or criminal factions control Conglomerate City, and all have a particular interest in Sector 451, where you’ll deploy an army of cloned soldiers to restore balance. The story isn’t complicated, but it also isn’t presented in a compelling way. Some stuff is happening and you’re going to do some other stuff to counter it, and you’re going to achieve most of your goals by shooting things. Or hacking things, obviously, as this is a cyberpunk game after all. You begin by creating your squad of clones. Initially you can only grow three different archetypes, a standard fighter, mage, thief setup but with names like Soldier and Infiltrator instead. Clone creation is pretty basic, as you can only name them and choose a colour to outline their portrait; you can’t choose hair or features, or what colour pants they’re wearing or anything.

Outside of combat it’s all quite XCOM-esque, too, as you assign research projects, stow wounded clones in a regeneration tank, and manage the day-to-day running of your agency. It’s not exactly exciting, but using loot found in missions and given as rewards to upgrade, outfit or completely remake your clones is built on some interesting systems. Gear is only one part of it, for example, and you’ll unlock genetic modifications that can only be applied when you create a new clone. You can also increase the individual stats and abilities of each soldier, as well as apply core mods that improve the efficiency of your entire squad.

Dropped into the litter-strewn, neon-haunted underbelly of Sector 451, I was immediately more impressed. The environments have a distinct personality to them, and while it reuses tiles just a little too frequently, RuneHead do a decent job with their setting. Combat is turn-based, and while there’s a certain amount of movement allowed, the enemies will more or less line up in front of you and then you take it in turns to shoot, hit, bomb, hack or electrocute one another. There’s nothing overly special about the animations, or even the look of Conglomerate 451’s enemies, but they get the job done. They run the expected gamut of silly-haired street punks, suited goons, gas-mask-wearing cyber-ninja types and a whole bunch of drones and cyborgs. The skills and abilities at your disposal are many and varied, though, allowing you to mix in AoE attacks and crowd control, or target individual body parts for precision damage. You can even directly hack certain enemies to apply debuffs, while some clones can be created with healing augmentations to revive and regenerate the health and shields of your party.

The thing to takeaway here, though, is that none of these elements are new – and none of them feel new. The setting might be different to the industry standard Doomed Magical Kingdom, but all the changes are entirely skin-deep. I feel like you’d only really need a pallet-swap and a few name-changes to make Conglomerate 451 identical to any other first-person dungeon crawler to come before it.

Looting the world and engaging in the admittedly well-balanced combat are both fun pursuits though. I enjoyed jumping into missions outside the mission area purely to explore the world and hunt for secrets and bonuses, and it’s nice to have the option to do so.

Despite a nice aesthetic in the missions and a handful of interesting concepts, Conglomerate 451 just doesn’t do quite enough to stand out and be noticed. It’s by no means a bad game, in fact at certain points I might even describe it as “quite good”, but it neither innovates nor inspires, and kind of just exists – in a genre that’s likely to get very busy over the next few years.

Combat is quite fun
Exploring the city is enjoyable

Doesn't do anything new
Story is a bit flat

Despite a nice aesthetic in the missions and a handful of interesting concepts, Conglomerate 451 just doesn’t do quite enough to stand out and be noticed.